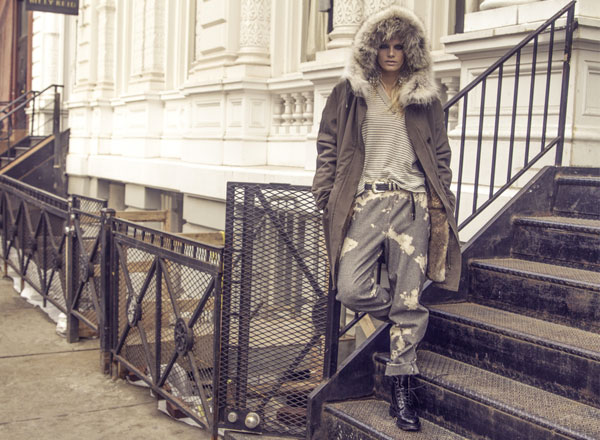 Known for its century-old fur tradition and impeccable craftsmanship, French luxury fashion house Yves Salomon has been on a global expansion mode since opening its flagship Manhattan outpost in December 2015.

The debut of the custom store in New York City’s Upper East Side follows the reopening of a shop-in-shop at Harrods and openings in Asia.

The master furrier, known to drape celebrities Emily Ratajkowski and Bella Hadid, accelerated its retail expansion towards Asia at the end of last year with the inauguration of stores in Hong Kong Harbour City and Shanghai and two stores in Beijing.

The first Yves Salomon store in Asia opened in Seoul in 2015.

“China is a key growth market for us, along with South Korea,” says Yves Salomon, president. “We also see bright market prospects in Japan, which is moving away from more traditional fashion styles.”

Building on the momentum of its wholesale business, Yves Salomon will use its stand-alone stores to attract new customers.

Another strategic initiative for Yves Salomon is the unveiling of an online boutique that showcases its main collection of women’s and men’s wear, military-inspired parkas and down jackets, children’s line, and a wide selection of accessories and web exclusives.

Shoppers can directly make their purchases on the e-commerce site with deliveries across Europe, the United States, Hong Kong and Dubai within 48 to 72 hours.

“The e-commerce platform presents a new way of experiencing the Yves Salomon brand and will allow us to reach a wider market base,”  Salomon says.

The e-commerce platform presents a new way of experiencing the Yves Salomon brand and will allow us to reach a wider market base.

For this year, the fashion house is proud to develop PIECES, the unusual collection made with collected materials.

The patchwork fur coats are made with recycled garments or scraps.

“Today, we prefer to reuse rather than continually revive the production cycle,” Yves Salomon says.

With an impressive history dating back to the Siberian fur trade of the early 1900s, Yves Salomon has developed an atypical know-how over four generations.

Under the leadership of Yves Salomon seconded by his son, Thomas, innovation has become a priority.

Yves revolutionised the label with a fresh approach – colouring, embellishing, embroidering or mixing shearling and fur with different kinds of fabrics such as leather, cashmere and knits to become warm weather clothing, not just winter-only staples.

With a team of leading craftsmen working at its ateliers in the Cité Paradis in Paris’ 10th arrondissement, Yves Salomon continues to expand its in-house lines and make them more accessible and attractive to the younger generation by blending vintage and modern elements through the use of fur and especially shearling.

Shearling is used with details on cotton or denim coats or jackets but also with reversible plain shearling pieces.

For its spring 2018 collection, the label is using an innovative leather-lightening technique to produce hipper, ready-to-wear pieces in cotton, suede and elaborately crafted leather.

Dresses and skirts are made in leather, with many left unlined for ultimate ease of movement, while patent and satin styles in both single block colours and prints will take you from day to night.

“Our collections can be worn in every circumstance,”  Salomon says. “We want our brand to stay relatable and to meet today’s lifestyle.”