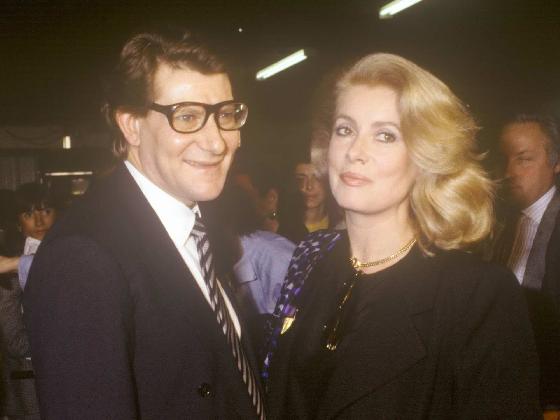 The “love affair” of style and inspiration between Catherine Deneuve and Yves Saint Laurent was not only a very successful combination of aesthetics, elegance and creativity, but also the greatest sales success so far recorded in the now customary vintage dress auctions.

In fact, over 900 thousand euros was the result of the auction from Christie’s Paris of 25 January, during the Haute Couture Fashion Week, in which 129 garments created by Yves Saint Laurent were presented expressly for the actress from 1983, the year in which Catherine Deneuve was forty years old and completely relied on the stylist.

A bond born in 1965, when the actress and the couturier met at the suggestion of the then husband of Deneuve, the English photographer David Bailey, for the evening dress to wear on the occasion of the official presentation to Queen Elizabeth II. Shortly thereafter, Yves Saint Laurent designed costumes for one of the most famous films of the actress, “Bella di giorno” by Luis Buñuel, in 1967, and in 1969 those for “My drug is called Julie”, directed by François Truffaut. Since then Catherine Deneuve remained one of the main inspirers of Yves Saint Laurent, also contributing to the launch of the YSL Rive Gauche prêt-à-porter line.

All 129 lots have multiplied their initial estimates, starting with the evening suit (chiffon blouse, skirt and scarf in taffeta) from the Russian collection designed for the autumn-winter 1977-78 which, starting from an estimate of 3- 5 thousand euro has increased tenfold with the final price of 52.500.

Same striking result for other lots: still more than ten times the estimate for the short evening dress completely embroidered with beads of the spring-summer 1969 collection (3-5 thousand, 42,500) worn for the meeting with Alfred Hitchcock, even thirty times the initial estimate (800-1.200) for the black velvet jacket lined with sable from the autumn-winter collection 1997-98 which, after a long struggle between 10 bidders, was awarded for 33,750 euros, fifteen times the estimate (1,000-2 thousand) for the evening dress in golden lamé and black velvet of autumn-winter 1979-80, sold at 33,750 and still eleven times the estimate (2-3 thousand; 31,250) for the cocktail dress in black chiffon with a belt of the jeweler Robert Goossens, spring-summer 1988, worn by the actress at the Night of the Oscars 2000 for the nomination for best foreign film of «Est-Ouest» by Régis Wargnier.

Lastly, the famous YSL Smoking, designed for Deneuve and worn by it on the occasion of the 20th anniversary of the Maison Saint Laurent in 1982, set a new world record in fashion auctions for a tuxedo at € 20,000. The Musée Yves Saint Laurent has purchased a preview of three dresses while at auction the same have made various international institutions, such as the Fashion Museum of Santiago de Chile and the Bowes Museum of Barnard Castle, Teesdale in England. The online sale of 140 other clothes from Catherine Deneuve’s wardrobe in Saint-Laurent Haute Couture and YSL Rive Gauche Prêt-à-Porter will end at midnight on January 30th.

Building Culture and Community at Moncler