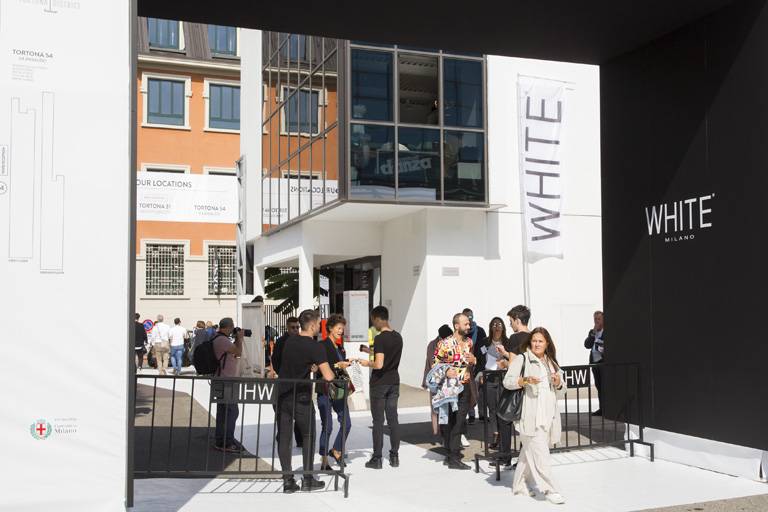 White changes dates and grows in the September edition with more brands and a new location in the Tortona district.

In this edition for Spring-Summer 2020 the contemporary fashion show has chosen, like the other Milanese womenswear shows, to start on Thursday (September 19) anticipating the closing: no more than Monday but Sunday (September 22), to be more aligned with the fashion week calendar and various events.

As the patron Massimiliano Bizzi noted today in a press conference, at this particular time “not of crisis, but of transformation of the sector” the fair grows by 4% in terms of brands on display (compared to the last edition) and extends the area 23,000 square meters, up 4.5% from a year earlier.

The new entry location is the former bodyshop of the Tortona 31 hub, where White’s sustainable space, Give a Fok-us, is back, entrusted to the artistic direction of Matteo Ward (founder of the brand, which for the occasion presents five areas marked by the themes of water, chemicals, climate change, waste and people.

Another new addition in September is the location of Tortona 31/Archiproducts, which strengthens the collaboration between White and CBI-Camera Buyer Italy. The Contemporary Windows project gives visibility to 12 top buyers in Lombardy and as many trendy brands chosen by each of them and creates a networking moment. Endorsing the initiative, Beppe Angiolini, honorary president of the Buyers’ Association, said: “I am sure that it will be repeated and expanded in the future.”

In addition, the collaboration with Confcraft Enterprises, born three years ago, for the presentation to buyers of innovative artisanal realities, of which the national territory is rich is confirmed. “There are 79,000 Italian fashion micro-enterprises and employ 372 thousand people, contributing 10.3 billion euros to exports– twice as much as in Germany, France, Spain and the United Kingdom,” said Giuseppe Mazzarella, delegate to internationalization. association, which hopes to make more and more team, even with Camera Moda.
The attention to the national Pmi is evidenced by the Yes Sicily space, which puts about thirty local brands in the spotlight.

But the White will also have a global imprint: there will be a representation of designers from Belgium, thanks to the dialogue with Flanders DC, as well as from Estonia – in connection with Fashionavant Showroom -, from Russia, according to the selection of the local showroom Dear Progress and from Brazil, in collaboration with the Senate 13 showroom and the Brazilian Consulate in Milan. Brands from Portugal and the Middle East will also participate and, in White Studio, a series of proposals resulting from scouting in the Far East.

Speaking of showrooms, the organizers of M.Seventy return to bet on the Project Showroom Connection-White that connects the Milanese showrooms with the salon and vice versa, favoring the flow of buyers, for which there is a dedicated courtesy car service ( in the photo, the Superstudio Plus, the heart of the fair, at 27 Tortona Street).

The fair sees the patronage of the City of Milan and the support of the Mise and the Ice Agency. “The support of the Mise and Ice in White – explained Roberto Luongo, Director-General of the Agency – is a clear choice to introduce foreign buyers to an exhibition of international importance, characterized in large part by the presence of Pmi artisans. Ice through its foreign network is at the service of companies to support them in foreign markets through numerous initiatives of assistance and promotion.’