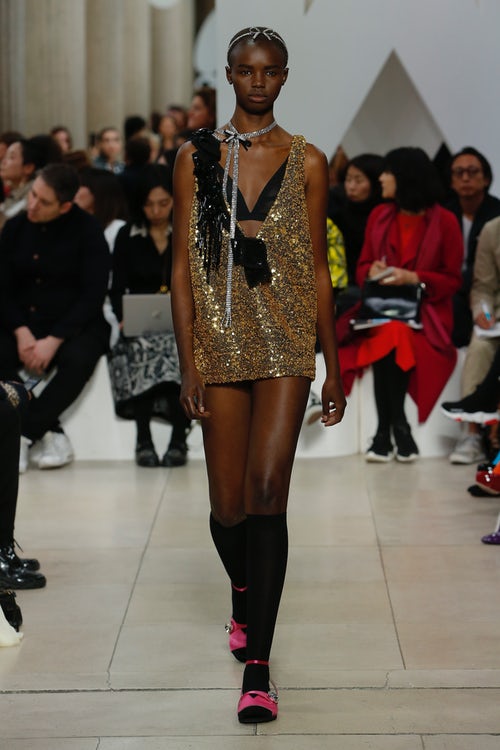 Glamour, tailoring, logos and elegance were the four poles of Miuccia Prada’s collection. But the polish was overpowered by her innate inclination towards subversion

If Miuccia Prada was on the simmer a fortnight ago in Milan, a cooler head had prevailed by the time she showed Miu Miu on Tuesday in Paris. She still railed against the retrogressive tendencies in popular culture and all the lip service paid to the future and “inventing revolution”, but she was back on a more familiar track when she talked about “having to destroy obvious beauty”. She’s never encountered a fashion cliché she didn’t want to run through the heart.

The beauty of the Miu Miu show certainly wasn’t obvious. It had too much geek and clunk for that, and Guido Palau outdid himself with the hair. But nor was it particularly destructive. Yes, there was a raw, unfinished, dragged and tacked-together aspect to many of the clothes (on the soundtrack, the new Prince album, equally raw, was a thrilling counterpoint), but it looked to me like they had their own errant story to tell about creativity in tough times.

M+M’s set turned the new Miu Miu logo into huge, sweeping, glistening white sculptural shapes, on which were projected women’s faces, a little like the electronic billboards in “Bladerunner”. That movie’s paradoxical edge of vintage futurism infused the clothes, at least in the way you imagine survivors might try and stitch together a new culture from the detritus of this one: sequins, jet beads, a dressmaker’s dead stock, chunky-soled platforms, a croc coat and python pencil skirts.

Hence the ragged high-gone-low, low-gone-high glamour of the collection, with bias-cut pieces in couture gazar decorated with crude rosettes of fabric, or swatches of denim, also bias-cut, decked with bows, even cut into a couture-ish sack shape (and matched to a pair of patchworked denim platforms.)

Miuccia defined glamour as one of the four poles of the collection. The others were tailoring, logos and elegance. But whatever polish such a quartet implied was overpowered by her own innate inclination towards subversion. There was a leather coat here in a shade of pink so disturbing it will frolic in my nightmares. 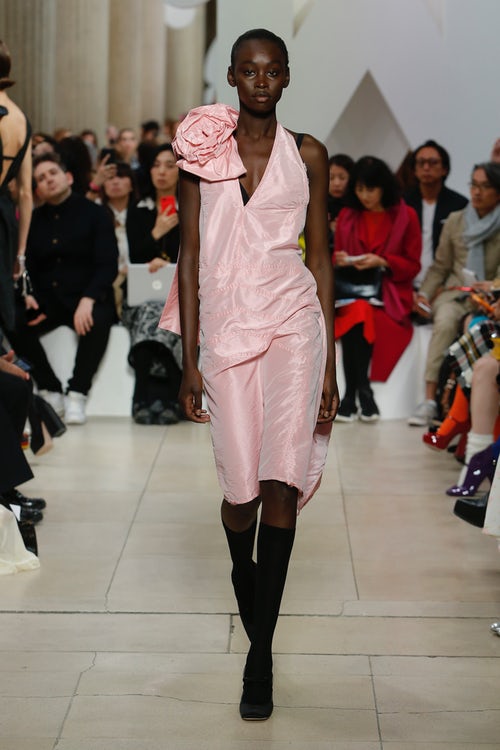 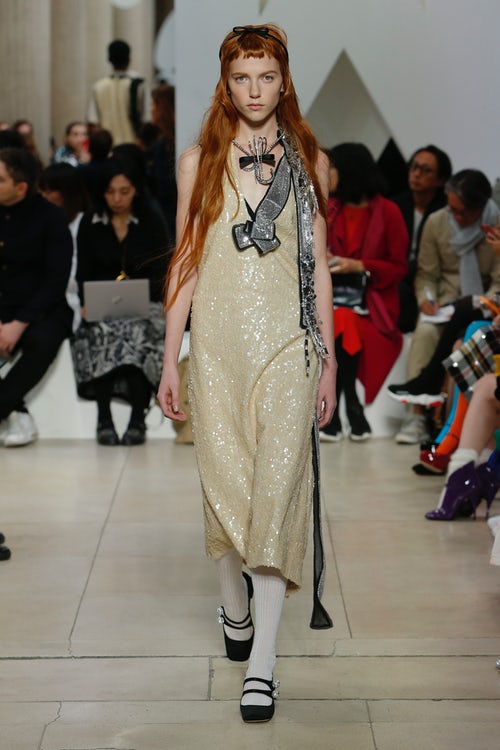 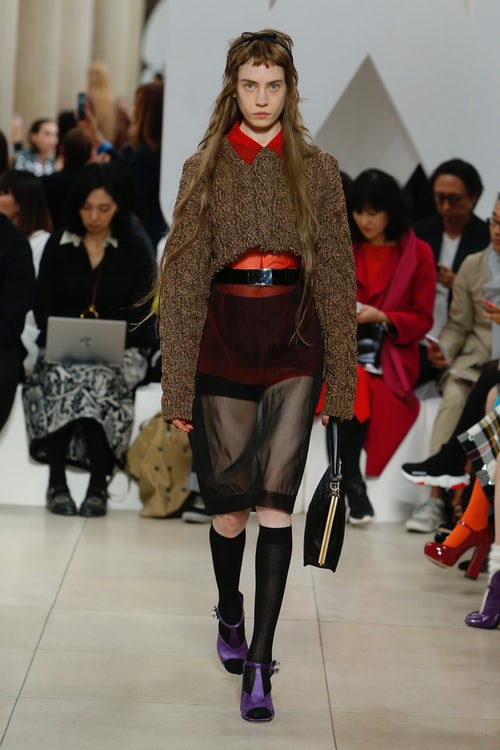 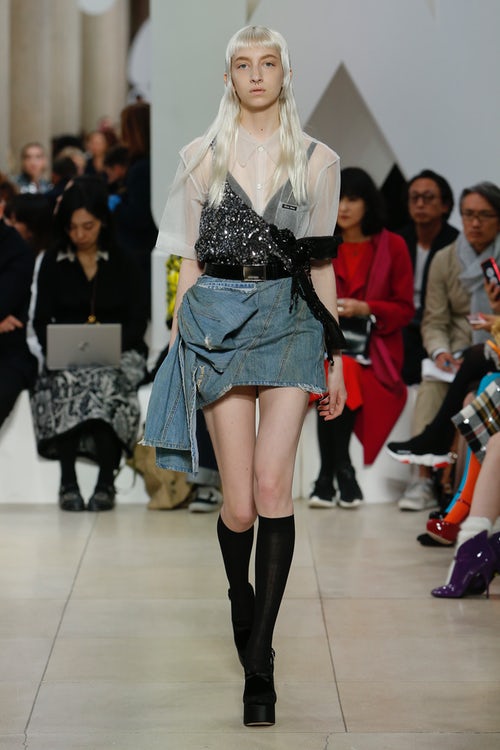 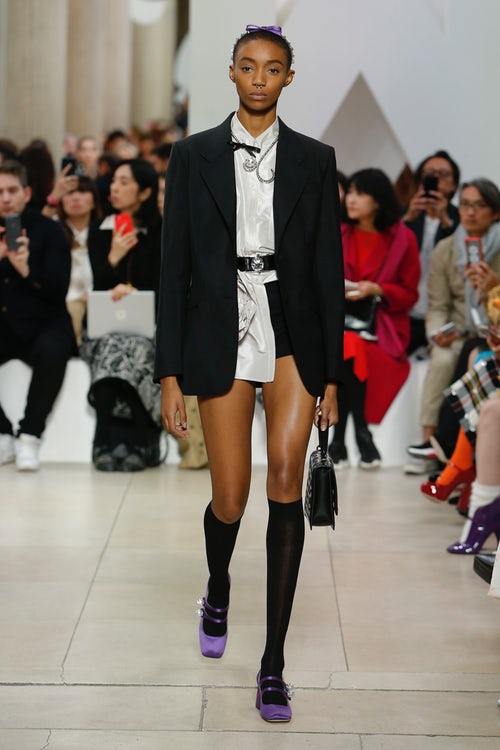 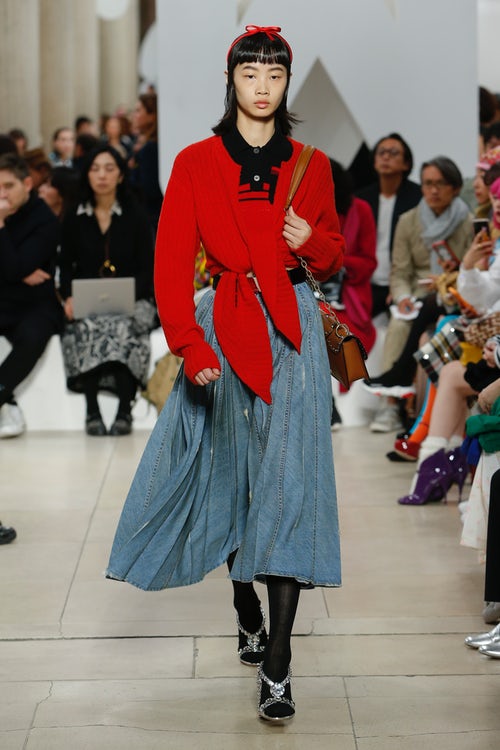 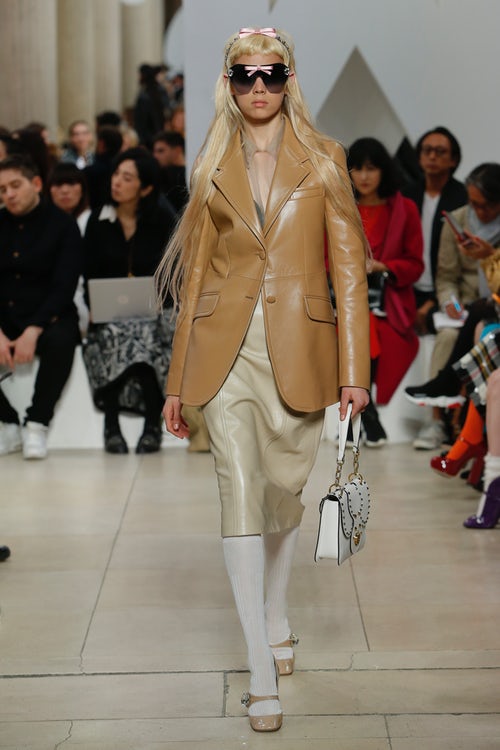 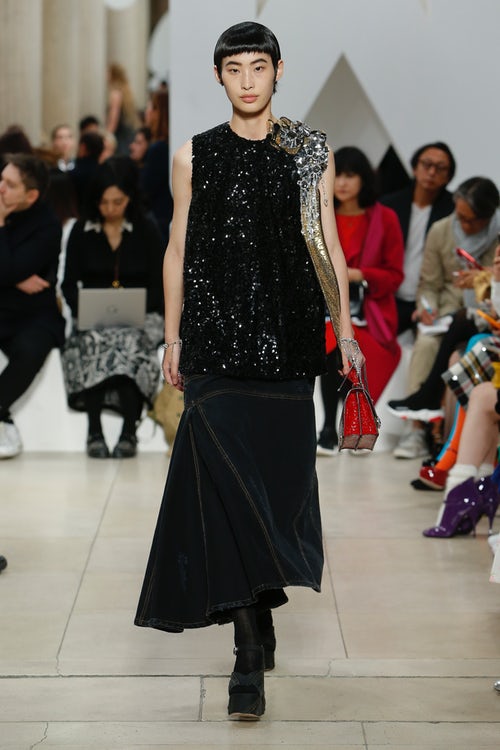 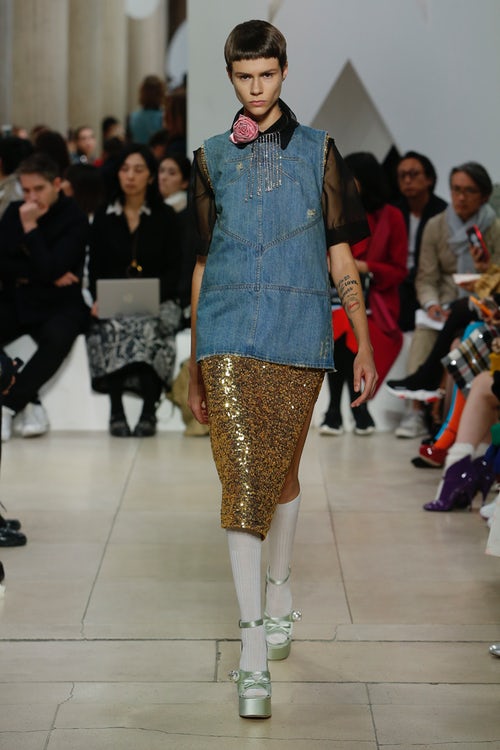 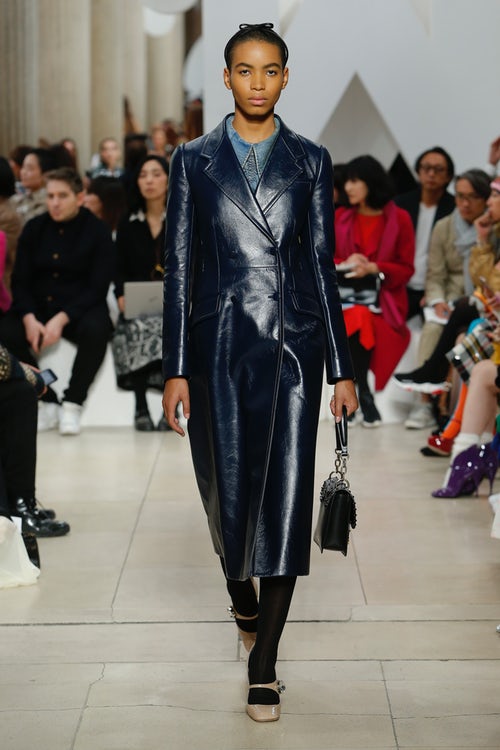 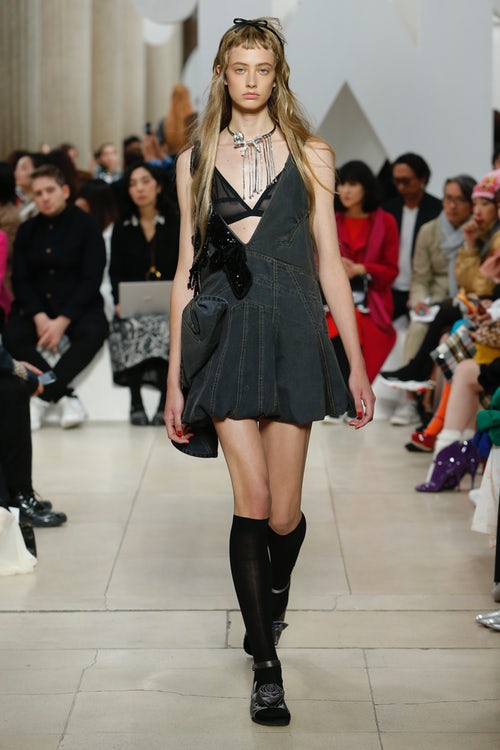 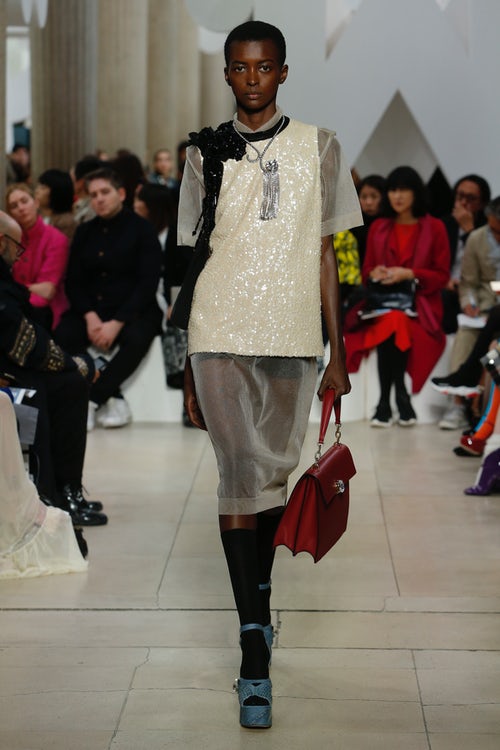 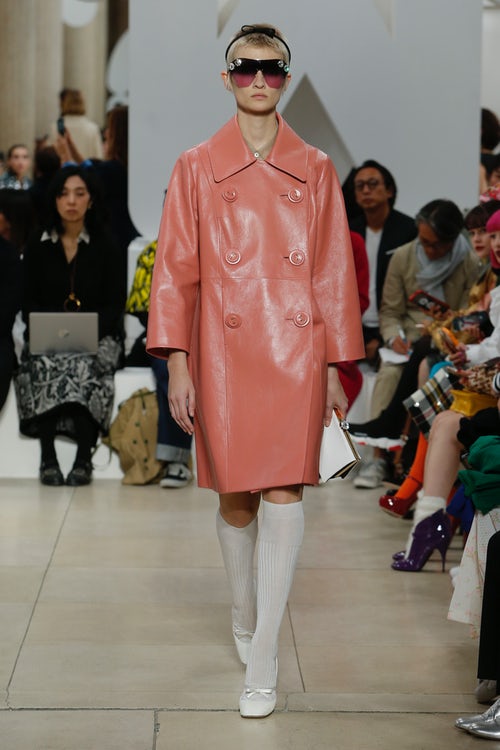 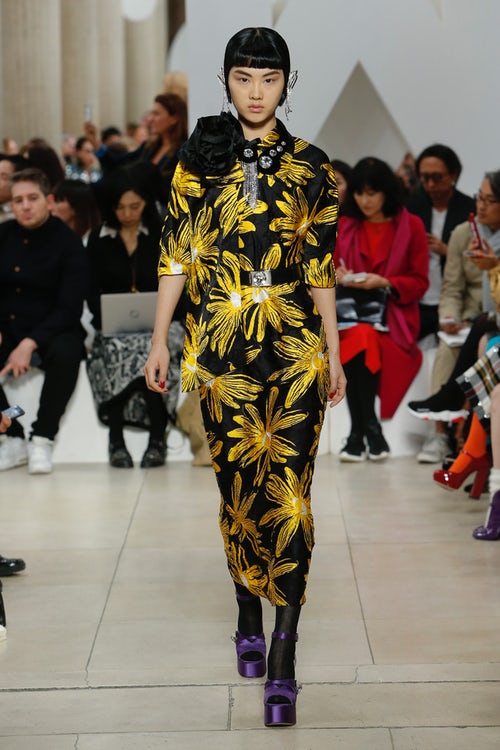 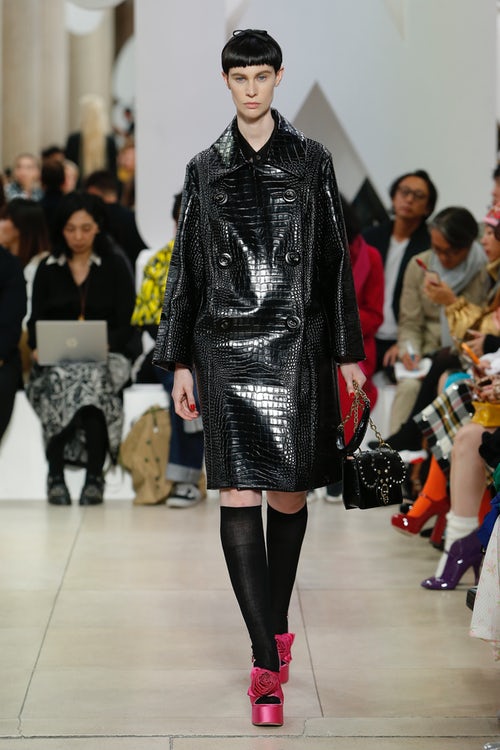 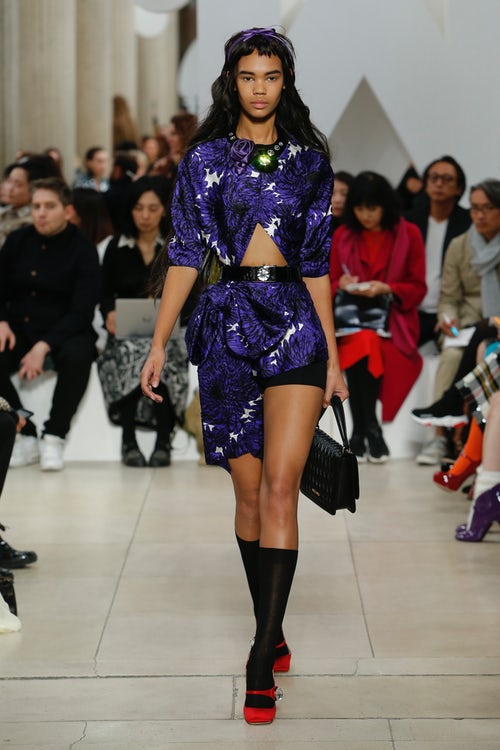 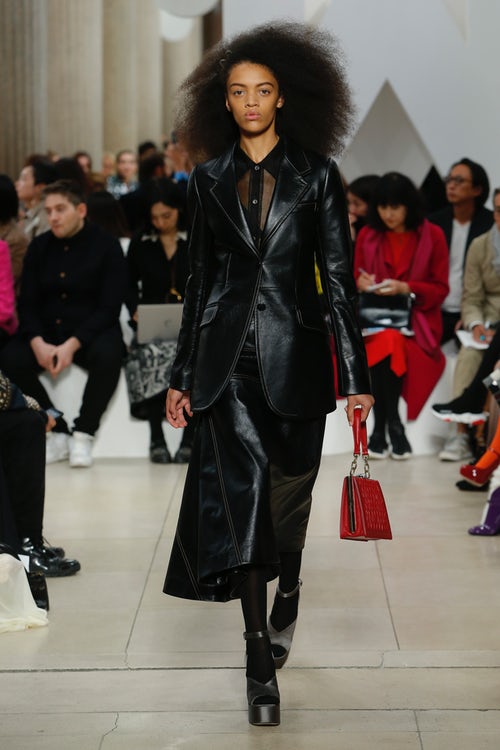