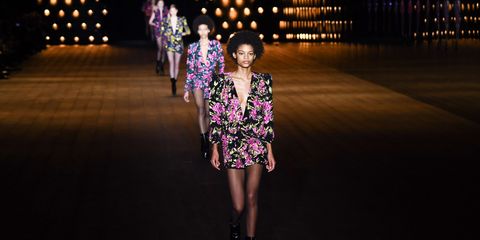 New York Fashion Week officially kicks off this Friday with a reduced season and the presence of many new and young hopes; although the most anticipated and followed debut will be that of the superstar designer Tom Ford, at the inaugural season as president of American fashion

Since becoming president of the Council of Fashion Designers of America in June – replacing Diane von Furstenberg – more media attention has been given to any of her moves or phrases or behavior than those of any new rising talent. The Texan stakanovist certainly didn’t rest.

Ford immediately reduced the official season to two days, to move to five days (very long) and close on the evening of Wednesday 11 September, while the debut is scheduled for the evening of Friday, September 6 with a program of three shows.

Tom Ford also radically overhauled the organization’s board of directors, after several CFDA members told him it was “not diversified enough.” On Tuesday, Ford announced the arrival of Virgil Abloh, Maria Cornejo, Kerby Jean-Raymond and Carly Cushnie, in a clear push to provide a more inclusive approach to the organization. However Ford made a more condescending choice in the appointment of the new treasurer, the famous Stan Herman, who does not reveal his date of birth on Wikipedia, founder of 7th on Sixth and president of the CFDA before von Furstenberg.

Between his stints at Gucci and Saint Laurent and for his eponymous brand launched in 2005, Ford has set up fashion shows in the big fashion capitals. Unlike the other three, where shows are often held in neighborhoods far from downtown, historically New York fashion shows are staged primarily in the Manhattan neighborhood.

Not this September though, when half a dozen big names or hot new stars will cross the East River to present their défilé. Among them is Tory Burch, who planned a Sunday event at the Brooklyn Museum; and then Pyer Moss, Brandon Maxwell and, according to rumors, Michael Kors. In what will be the single most watched event of the season, Rihanna will present the Savage x Fenty collection in New York’s most densely populated neighborhood on Tuesday night, while DKNY will celebrate the brand’s 30th anniversary on September 9 in Dumbo, Brooklyn.

But the award of the farthest location undoubtedly goes to Tommy Hilfiger, who presents his second collection conceived in collaboration with the actress and youth phenomenon of the moment Zendaya in Harlem. To maintain the house’s tradition of unleashing rock events in legendary and iconic venues for the music scene, Tommy and Zendaya will orchestran this new episode of Hilfiger’s See Now Buy Now campaign in the Apollo Theater.

To attract the press and foreign buyers, the CFDA negotiated preferential rates for visiting editors at two Standard chain hotels, the Highline and East Village hotels, as well as two Edition hotels, in Times Square and Madison Avenue. The CFDA has also provided a modest transportation aid for visitors to the notoriously busy New York: a credit of 200 dollars to use with Lyft during their stay in the Big Apple. And Ford’s team has actively encouraged major American brands to offer round-trip flights to New York to major international players in the fashion world.

But there’s one thing Ford hasn’t been able to reform yet: the historically unmanageable New York calendar. On Monday, the CFDA’s official website listed 72 parades and presentations. However, the “The Shows” list of New York Fashion Week, run by the mega agency IMG, with fashion shows at Spring Studios in the central Varick Street, indicates as many as 100 shows and presentations. Many times the lists are the same, but not always. However, a rough count would indicate that there are about 145 runway shows planned – which would make New York the biggest fashion show season of all. Technically the first models will parade at 9am on Wednesday morning in the défilé of “TMall China Cool” with the brand Peacebird. But basically the first really important shows will be on Friday night with Rag & Bone (who is not on the CFDA list) and Jeremy Scott. That said, the highlight of the opening night for the journalists present will likely be Ford’s welcome dinner, which will be hosted at a Noho restaurant to introduce journalists and buyers to young American designers.