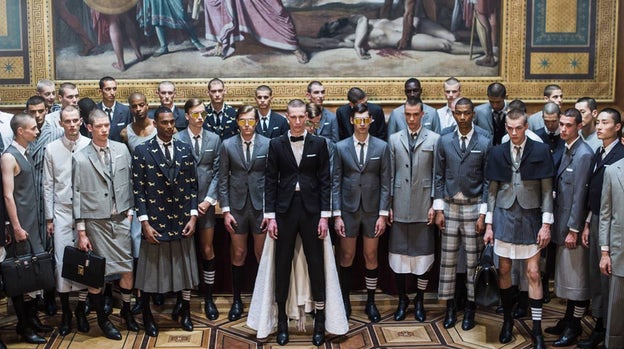 Inside the two and a half floors that comprise designer Thom Browne’s New York atelier, nearly every visible surface is on-brand.

Every staff member is decked out in Thom Browne’s signature clothing; the furniture is appropriately midcentury and fashionable; the walls are covered in racks of his clothes from past, present, and future seasons; and even his miniature wire-haired dachshund Hector is there to add a touch of verisimilitude to go with his now-famous, $2,600 dachshund-shaped handbags.

The only thing amiss is in Browne’s private office, where about 10 seven-and-a-half-foot-high, unfinished, black-and-white canvases lean against the wall. These are, Browne explains, artworks he painted himself. “I had this romantic idea of doing a series based on John Singer Sargent-scale portraits,” he says, standing beside an unfinished painting in a pair of shorts on a recent November Tuesday.

Art, for me, was not for commercial reasons at all; it was purely just to create something that I wanted to [make] for myself.

Until recently, Browne’s artistic practice was a discreet, personal affair. During downtimes, he would take out a palette and brush and start creating without a smock (he professes not to care if paint gets on his $2,500 blazer or $690 shorts) as a form of relaxation. “I have a specific job that I actually need to make money at,” he explains. “Art, for me, was not for commercial reasons at all; it was purely just to create something that I wanted to [make] for myself.”

Next week in Miami, though, his private hobby will have a very public debut. On December 5, he will unveil a 21-foot-high fabric sculpture of a palm tree (Palm Tree I, 2019) that he has installed in the Design District’s Moore Building as his first serious foray into the world of fine art.

“I’m really proud of what I’ve done in fashion and what I still have to do,” Browne says. “And I’m really excited to see what happens in the [art] world as well.”

Browne is hardly the first celebrity to attempt to transition to art-making. Actor Adrien Brody presented an exhibition of his own paintings (Hot Dogs, Hamburgers and Handguns) in conjunction with Art Basel Miami Beach in 2015. Last year, Maccarone Gallery presented an exhibition of actor Jim Carrey’s political drawings (IndigNation). James Franco has had a well-publicised flirtation with contemporary art for years.

The only recent success story might be that of the late actor/director Dennis Hopper, whose photography is regularly exhibited in museums and is bought and sold by serious art collectors.

On the whole though, the art world is not a hospitable place for celebrity dabblers, a fact not lost on Browne. “It’s a little scary,” he says. “I do joke about it sometimes. I get critiqued about everything in regards to fashion, why do I want to enter a whole new world of being critiqued?”

The answer, he says, is simple: He likes making art, and he likes what he’s made.

“It’s only because I really feel strongly about the piece,” he says, in reference to the palm tree, which is made of yellow, green, and pink seersucker, pincord (fine corduroy), and gingham oxford fabrics. “It really relates to a lot of things I do, in terms of playing with scale, and playing with the idea of the American Dream and Americana,” he continues. “It’s about taking something expected and showing it in a very unexpected way.” The work is meant to speak to the overlap between the workplace and vacation, and to address how modern vacations are both private and performative.

In one respect, Browne has worked with sculpture and spectacle for years; it’s just that his outlet has been runway presentations rather than, say, a white-walled gallery.

“I guess I kind of dipped my toe in the water a little bit with my fashion shows in regards to specific installations I’ve had as centrepieces,” he says. Past shows have included models inside a massive, white-unicorn puppet, a boardwalk with lifeguard chairs and cabanas, and in 2012, a room full of coffins.

I get critiqued about everything in regards to fashion, why do I want to enter a whole new world of being critiqued?

The problem, Browne says, is that the sculpture was drowned out by the clothing. “Over the years, I kept thinking they’d been lost on the audience,” he continues. “Of course, people don’t specifically come for an art installation; they come for the clothing. But the installations were, to me, a lot more important than people realised.”

Now that his business has stabilised — in 2018, Ermenegildo Zegna announced it had purchased 85 percent of Thom Browne, based on a valuation of $500 million — Browne has begun to devote more time to his art.

“I have the luxury now because I have a lot of really good people at work here,” he says. “I have a little more time to devote to something outside [the business].”

The question then, is how far Browne is willing to go as he wraps himself in the mantle of fine art. He’s exhibited an artwork once, when his friend Dodie Kazanjian, curator of the Metropolitan Opera in New York’s Gallery Met, asked him to contribute a portrait to her 2014 group show of portraits of Prince Igor, the subject of Alexander Borodin’s 1890 opera.

Browne says he’s never sold an artwork, though he’s given several away, and he refuses to hang his art on his own walls. “I think that’s weird,” he says. “I just feel like it should be in other people’s spaces, as opposed to my own.” (He has paintings by Norman Rockwell and Jean-Pierre Cassigneul, as well as 13th-century and 14th-century Italian crucifixes.)

He says he wants his fashion and his art to “become more separate.”

“That’s not to say that I won’t have installations in my fashion shows, because it’s become such a part of them,” he says.

For which would he most like to be remembered: his art or his fashion? Browne remains comfortably on the fence.

A Military Fantasy at DSquared2

Jumpsuit: yes, the whole suit is the fashion trend of the moment, even for him