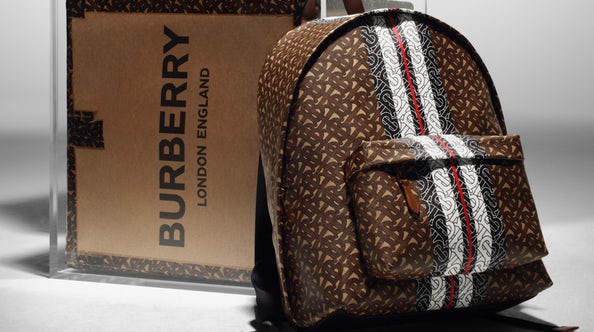 The Verdict on Riccardo Tisci’s Burberry

Burberry is in the second year of a turnaround plan to revive performance and reposition itself as a true luxury player on the back of Tisci’s creative overhaul — which has come with new heritage-inspired monogram on products from high heels to scarves — a widening of the brand’s leather goods offering and operational shifts like dropping products more regularly.

Tisci’s catwalk shows have had good but not ecstatic reviews, and the looks have only trickled into stores from February. Today, the brand said about half of the mainline stock in store in June was his product, which drove the sales growth. Total sales climbed to £498 million ($620 million) in the 16-week period.

“This was a good quarter in our multi-year journey to transform Burberry . We increased the availability of products designed by Riccardo, while continuing to shift consumer perceptions of our brand and align our network to our new creative vision. The consumer response was very promising, delivering strong growth in our new collections,” Chief Executive Marco Gobbetti said in a statement. The shares surged 14.6 percent to 2,238 pence in London trading.

We recognise this is a transition… These things don’t happen overnight.

Core to Gobbetti’s strategy is an attempt to transform Burberry from a more accessible luxury player to a British rival to Dior or Louis Vuitton. That’s meant scaling back its concession space in less exclusive department stores, refurbishing 23 stores and closing 9 underperforming ones and pushing its 163-year heritage with a new monogram of founder Thomas Burberry, a “TB” to promote its heritage but also tap status-hungry, newly wealthy shoppers keen for logos.

“Riccardo’s product will continue to build and represent three-quarters of our offer,” by the year end, Chief Financial Officer Julie Brown said on a conference call. “We recognise this is a transition. There’s a move to fashion and towards luxury. We’re doing very well. The move towards fashion is complete and we’re seeing extremely good reaction from Riccardo, both the runway, summer and autumn (lines). These things don’t happen overnight.”

Another core pillar of the turnaround is leather goods and handbags, where Burberry is expanding its offering with like the Grace shoulder bag and £1390 ($1740) Foster leather bucket bag to catch up to rivals in the high-margin category. However, sales in accessories “declined” as poor performance of older styles outweighed the benefit of the new collections. “It’s still very early days” and building a full-line range will take time, Brown said.

On Brexit, Brown said they are preparing for all scenarios including a no-deal exit, which could mean additional incremental taxes as goods move in and out of the UK. The brand has a cross-functional team working on supply chains to prepare for October 31.

But reaction to Tisci’s product is the biggest takeaway from today’s results, the first time they have been included in sales, according to analysts.

“Tisci’s new product penetration was circa 35 percent during the quarter and is now closer to 50 percent where sales increased by a double digit pace — a key positive support for the creative transition,” according to John Guy, luxury analyst at Mainfirst Bank. It is a “good start.”

Chinese New Year, the tiger’s journey into the world of fashion

Cristina Cennamo, 4 years ago 3 min read
Focus on, Focus on

The Attico, the Italian touch of Giorgia and Gilda