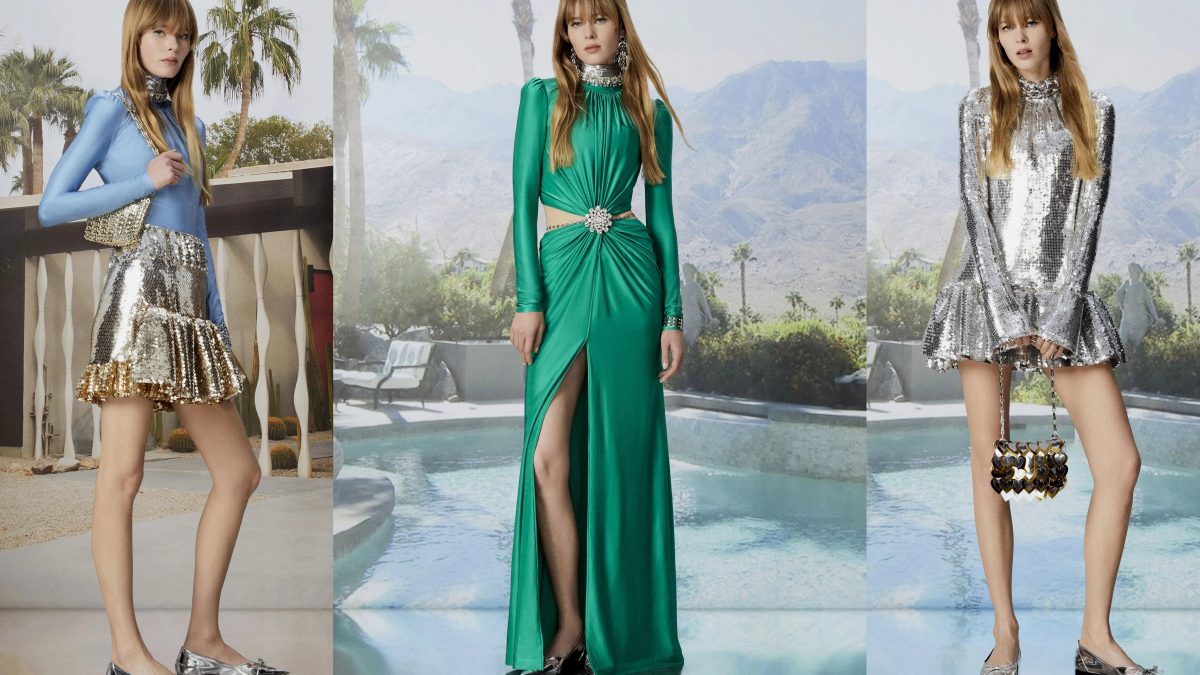 Paco Rabanne celebrates the 60s and 70s with an unmissable autumn/winter 2022 collection: The Party

The atmosphere is the carefree one of a colorful and flamboyant party between the 60s and 70s in a luxury residence between Palm Springs and Hollywood. Julien Dossena, artistic director of Paco Rabanne since 2013 after Manish Arora and Lydia Maurer, seems to have managed to perfectly interpret the glamorous atmosphere described above as if he had taken part as a guest at such a party. The source of inspiration for this Paco Rabanne fall/winter 22 collection is indeed a party but not just any party: The Party. We are not talking about a party that actually happened but perhaps the symbolic sum of all the parties that were actually held in those years in the California of VIPs and which was masterfully told in a cult film from the sixties. The Party, in Italian Hollywood Party, is in fact the title of a very successful 1968 film written and directed by one of the greatest directors in the history of American comedy cinema of the last century: Blake Edwards. Interpreted by a masterful Peter Sellers, the film tells the story of a young Indian actor in the Hollywood of those years involved in a series of hilarious surreal misadventures during his participation in a huge fashionable party given by a famous film producer. The film really liked Julien Dossena who considered it “really funny and aesthetically very interesting because it’s all set in a sort of house of a Los Angeles film producer in Hollywood in the 60s, a crowded party with many different looks and attitudes which was very interesting to work on” precisely because according to the creative director himself “Paco Rabanne always speaks of a kind of festive spirit.” For Dossena, a party theme at the height of the 70s sets the ideal mood for her lurex knits, slit pencil skirts and matching bras and sequined creations, the latter being very much dear to the Paco Rabanne house, a legacy successfully updated by Julien, after all, hedonism has always been in the brand’s DNA. The shimmering volumes in frilled metal mesh that we saw in the previous season’s collection are reinterpreted in a new way in fascinating and seductive minidresses and variations of silver and gold ensembles among which an all-sequin construction stands out that also includes a headpiece and a bag, which is a sleeveless version of an archival record dress, originally worn by Audrey Hepburn in ‘Two for the Road’, and the combination of a mini top with bell sleeves over a ra-ra skirt with purse that’s all a fusion of gold and silver blended with great aesthetic flair. Long striped lurex floor-length knits suggest effortless sophistication, knits in sensual shades of watermelon and emerald are trimmed with rhinestones, while a starry motif appears on an elegant pink skirt and mini dress in very intense light blue jacquard velvet. A sartorial reworking of looks is added to this show of glamorous and festive femininity clearly inspired by the world of uniforms but with decorative elements that are always overtly feminine. A long emerald evening dress with a high slit and exposed hips and with two other splendid bright accessories at the belly and around the neck completes this Party collection with great refinement. Come and discover the wonders of Paco Rabanne on Michele Franzese Moda and get ready to shine brightest for your next trendy party.