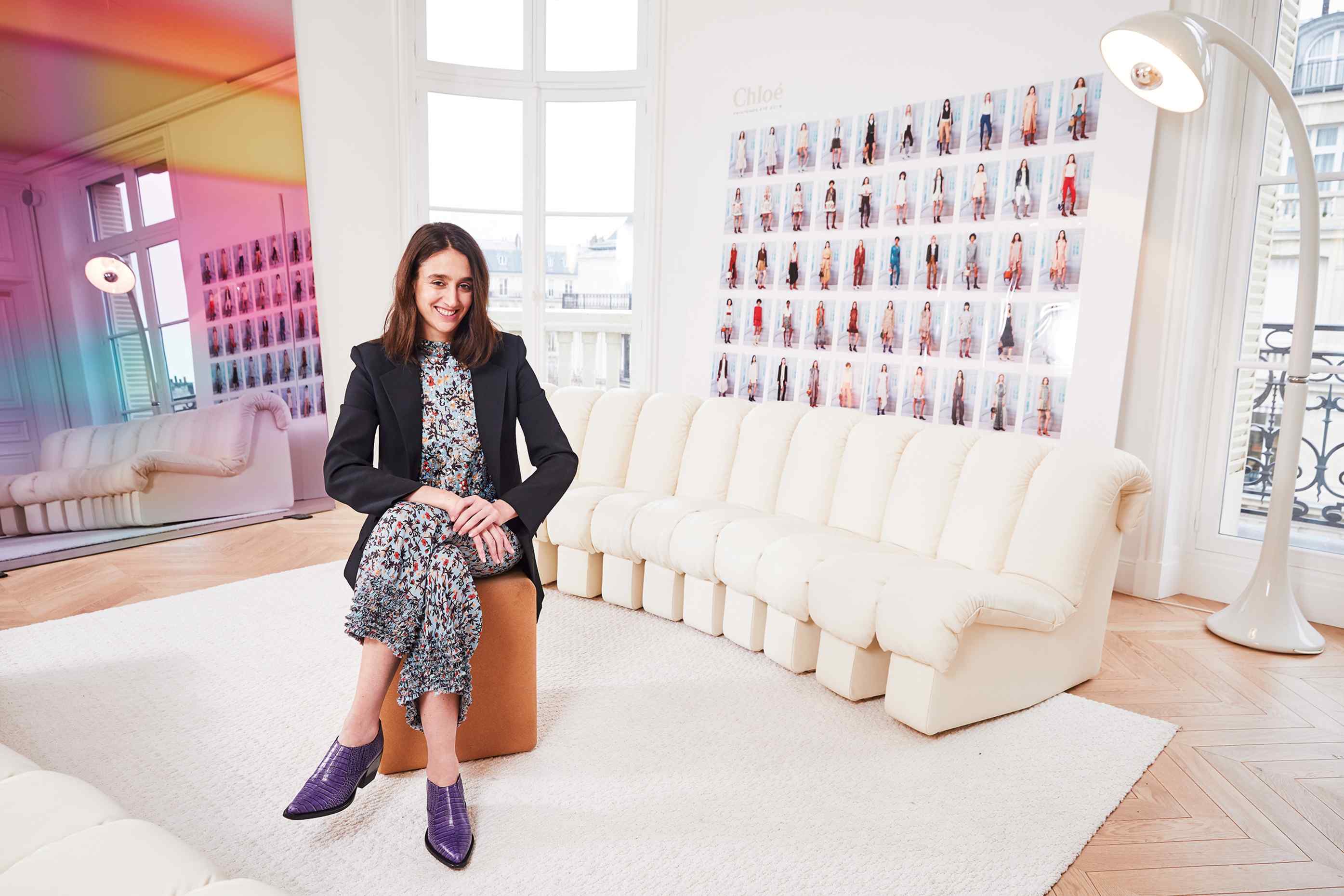 The new era of Chloé directed by Natacha Ramsay-Levi

In the merry-go-round of designer appointments,  the announcement last year that Natacha Ramsay-Levi was going to become creative director of Chloé  was a rare delight. And now it’s a strong reallity

Firstly, she was a new name; despite being a well-known industry insider, she has never held a creative directorship before.

And following a long succession of British designers at the helm of the quintessentially Parisian house – Clare Waight Keller, Phoebe Philo,  Stella McCartney and Hannah MacGibbon among them – Ramsay-Levi is French.

“I’ve been thinking about why my being French might be important,” explains the 38-year-old, sitting on a velvet banquette in her office, next to the newly refurbished Maison Chloé in the eighth arrondissement

. “I think I’m a very direct person and I can always react: I think this is very French. We are always reacting to something; we’re never happy… I always question things,” she says.

“When you’re working within the parameters of a luxury house that has an established code and a clear history, the ability to work within that frame while questioning things as well, is very important. It’s also very freeing.”

She is wearing a pale-blue floral top spangled with sequins, matching cropped trousers from her debut spring/summer 2018 collection and purple python mules.

The look is broken with a black suit jacket, which may or not be Chloé. She possesses the cool élan one immediately aspires to copy, but none of the froideur that so often accompanies it.

Ramsay-Levi’s name may have been unknown outside the fashion world before her arrival at Chloé, but her CV is impeccable.

The former lieutenant of Nicolas Ghesquière, she began her career making coffee at Balenciaga and made the leap from intern to head of studio in just nine years. Ghesquière left in 2012 and she followed him to Louis Vuitton in 2013 where, as head of ready-to-wear, she acted as the conduit between the creative director of womenswear and his studio.

Now, at Chloé, she oversees everything from ready-to‑wear and shoes to the handbags that make up the bulk of of the brand’s sales.

And she has arrived at the Richemont-owned house during an ambitious programme of expansion.

While the group doesn’t release financial figures, Chloé has reported growth for the past seven quarters.

It opened 12 new boutiques in the last fiscal year, and will launch several more across its global markets in the year to come.

Meanwhile, a new arrangement with its shoe licensee has given the maison more leverage in its manufacturing arrangements and control of distribution.

“The first thing I wanted to put back on track was the tailoring,” she says of her ambitions to soften the brand’s focus on flou – the flowing dresses and gowns that suggested a more girlish sensibility.

“I think this fluidity is very important, but I wanted it to be less fantastical. My feeling was that the collection should not be casual: I wanted to make things in a relaxed way or to put a casualness in the attitude, but I wanted the clothing itself to be sharp.”

The reviews have been positive and the buyer reaction strong – which is just as well, since much of the catwalk collection is precisely what goes into stores (at Chloé, there is no giant commercial collection to hide behind).

“Natacha has ushered in a new direction and mood,” says Net-a-Porter’s global buying director, Elizabeth von der Goltz. “Her debut pays homage to the brand’s bohemian aesthetic but her interpretation of the Chloé girl is more modern and urban. It truly speaks to how the modern-day woman dresses.” The retailer has “fully embraced her vision”, says von der Goltz, doubling the number of catwalk looks from the brand in this season’s buy. “The embroidered velvet blazer was our highest spend from the collection. And the Rylee boot (£1,840) and the Drew bag, which we expected to have reached saturation point, were cleverly reworked with a luxe chain and new fabrications.”

As a stylish female designer who can wear her own pieces with aplomb, Ramsay-Levi is clearly a powerful brand ambassador. The day after her debut, she was pictured wearing the horse-embroidered velvet suit that became one of the most memorable looks of the season. “Honestly, it came very naturally,” she says of the suit. “ Stella McCartney did the horse at Chloé, and I know her collection very well because I was at school at the time. And the fantasy of the horsewomen has always been a key Chloé code for me – that classicism we associate with the horsewoman and the beautiful leathers and classical colours.” The team, she says, was a bit reluctant to make it. “They were like: ‘No velvet.’ But I said, ‘Yes. We’re going to do it.’”

The horse, the archive prints (she’s currently rifling through the contributions made by Lagerfeld, during his decades at the house) and the gentle flowing silks all demonstrate Ramsay-Levi’s determination to maintain a strong sense of continuity, despite her love of “transformation – and play, where you bring the novelty”.

Her main objective, she says, is that “when you enter a boutique you know where you are and can find what you came for”.

Unlike those designers who bring in a whole new design team, she has kept all the staff who were there when she arrived. “It was very easy,” she says of the transition. “People were really willing to get ready for a new chapter, so it’s not like I had to dig for anything. Everything is here: the archives are in the building and the team is great.”

In many ways, her vision for Chloé is most inspired by the house’s founder, Gaby Aghion, who died in 2014, aged 93. “Gaby’s granddaughter works in the archives, and her son came to the show, so I had many chances to speak to them about how she built the house,” says Ramsay-Levi.