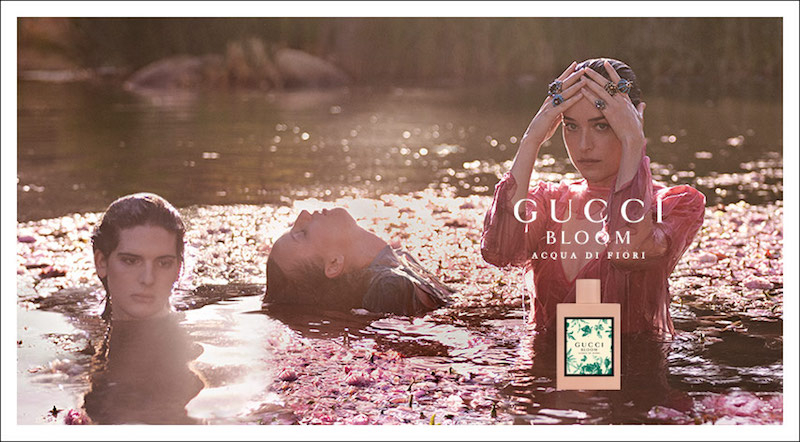 Gucci promotes its new perfume on Instagram, and does so with the help of the spectacular illustrations of 15 fantastic artists

The sense of smell is the most mysterious of the five senses, both because it is the one on which we have less information, and because it is linked to memory and emotions. Capable of connecting with the external environment, the sense of smell helps us to perceive the world from afar but also our inner world. That’s why, to guess the perfect perfume to give to someone, it’s always so difficult.

The perfume is probably the most personal of all beauty products. While a red lipstick seems to have the same color shades on any woman, the fragrance has a different smell on each of us, depending on the chemistry of your body. Have you borrowed a fragrance from your friend that you love so much? Well, it will never have the same effect on you.

The new Gucci campaign is based precisely on this concept, essential the contribution of 15 female artists to create different interpretations of the brand’s new fragrance, Gucci Bloom Acqua Di Fiori, the latter created by creative director Alessandro Michele.

The new fragrance includes notes of jasmine, tuberose and buds of cassis, a real elixir, fresh and delicate, designed to evoke the feelings of youth, female friendship and invites you to rediscover yourself. It is perfect for young women, in fact it is the first major Gucci campaign focused on Instagram, which has recruited talents from around the world, including Phoebe Collings-James, the French tattoo artist Frances Cannon, Nouri Flayhan, the Italian Emma Allegretti, the Londoner Joy Miessi and New Yorker Joana Avillez.

The artists have had maximum freedom of interpretation through their style, with illustrations ranging from black and white drawings to colored comics, although there are common elements, such as the pale pink hue of the perfume bottle and the call to green. Each of them represented what it means to grow, the friendship between women and the metamorphosis that every girl goes through during adolescence, becoming a woman, discovering her personality, which over the years, will continue to define itself, to emerge.

Here is a series of illustrations designed and published on Gucci’s social media channels:

His work is inspired by medieval, gothic and Flemish art. The project makes its own debut with her and her mythological creatures that play among the plants in the grass until they themselves flourish.

This artist has already collaborated for Alice + Olivia, Louis Vuitton and Marc Jacobs. For Gucci he imagines a woman who discovers the wild beauty of life embracing nature and even herself.

In his photorealistic pencil drawings, the buds of cassis represent the theme of the maturity of the fragrance.

His idea is to represent the characteristics of the perfume and its flask in each eccentric character that goes to draw, through, for example, the colors of green or pink.

The Italian illustrator tells us, through her drawings, how to blossom with the magic of a potion, to transform an insecure girl into an independent and strong woman.

The artist tells the story of metamorphosis in transformation into a woman.

The French artist, with the help of art and poetry, tells many stories, all different and with multiple characters, leaving open-mouthed, who looks and who reads.

The young designer has become famous on Instagram for her cartoons, where she scrutinizes the secret part that every woman tries to hide. For Gucci has created a series of drawings in which they are represented friends who exchange their secrets and can finally feel themselves, together.

His drawings are real encounters with inspiring women who learn from each other throughout their lives, becoming stronger and more aware of themselves.

Reflecting its origins and its love for the power of nature and its creatures, the Lebanese illustrator explores the themes of mysticism and the relationship between humanity and nature.

Artist, graphics and creative director, his pieces are inspired by the people dear to her, in this interpretation he drew on his experiences, memories and travels of the past.

An excerpt from the work of Rowan Blanchard, inspired by a portrait of Alia Penner, surrounded by splashes of buds of cassis, one of the notes of the Gucci perfume.

Inspired by the ancient botanical drawings of plants that are ingredients of the perfume, it immerses the whole in a romantic atmosphere, using poetry.

The artist conveys the idea of transformation proving that you never feel alone if you can appreciate everything around you, like the flower protagonist of his works, which has never liked the water but after a downpour, slowly began to grow and understand the meaning of spring.

A beautiful operation accompanied by an effective targeted marketing campaign. An explosion of art, where the center of everything is the feminine universe and the beauty of being a woman, in all its facets.