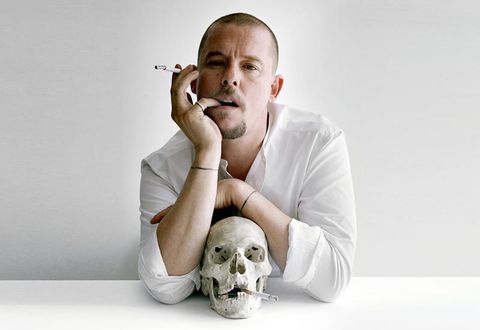 The fashion hooligan: the documentary about Alexander McQueen arrives on Sky

Sky Arte conveys the hard and edgy portrait of Alexander McQueen, the designer who still is one of the fashion headlights

“Now I show you my mess, my illusion, my theater”. These are the words of Alexander McQueen with whom he begins the documentary entitled “Alexander McQueen Fashion Holigan”, a hard and edgy portrait of the great English designer who died in 2010 that Sky Art broadcast on October 19, 2018 at 21:15 on channels 120 and 400.

The uncomfortable and spectacular example of McQueen

From the beginning to his arrival as Givenchy‘s creative director. Since returning to his line to suicide after the last men’s show, albeit too verbose and an approximate thread, the documentary deserves to be seen to understand, today more than ever, the importance and validity of a vision, that of Alexander McQueen, which has a lot to teach in today’s fashion.
In a moment of politically correct and lack of real provocation or innovation on the catwalk, the example of Alexander McQueen remains a very heavy warning.

“My influences come from everything”, Alexander McQueen declared in the interviews, “I am also inspired by street bums and drugs”.

In his shows, impossible to call parades, there was everything: the historical symbols of the Scottish clan, mythological childish fantasy, and the sadomasochistic or acrobatic clothing of the Kinky Gerlinky, the extreme and acrobatic parties in the gay clubs of the London underground of the late eighties and early ninety; the memories of the great couture and the ruins of the Victorian era; the melancholy romance of the English ladies and the infamous suburbs of Jack the splinter.

And then skulls, bones, ropes and all the horror movie paraphernalia that in his hands became a dazzling memento mori.

All this, combined with a great sartorial wisdom, created the myth Alexander McQueen, a legacy that should make a lot to reflect the comfort zone in which most of today’s designers closed, all terrified by criticism or photo-comparison on Instagram.

To this useless surrender, to this renouncement to the risk of the fashion system, Alexander McQueen would respond with one of his uncomfortable and highly anticipated shows, a powerful show because it is unconventional and never in any way compliant. In this, his example remains a paradigm. A paradigm that would need to be made a fact again.

All Hours Foundation, the new born in the Saint Laurent house