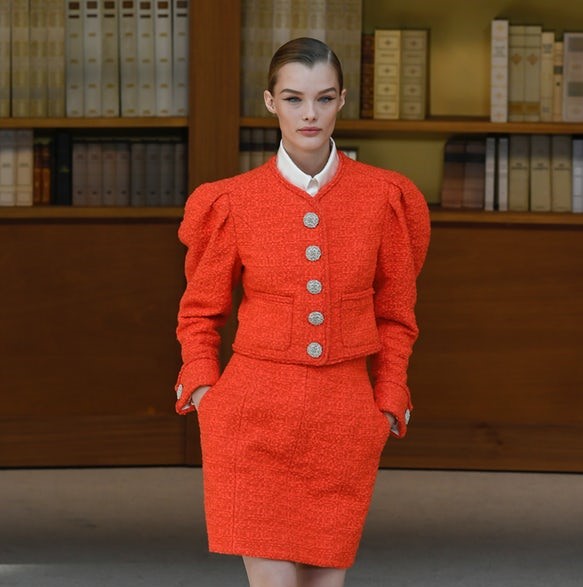 With a library-themed show, Virginie Viard, Karl Lagerfeld’s anointed successor, proved that the storied French house was safe in her hands

When Massive Attack’s “Safe from Harm” rang out at the finale of Chanel’s haute couture show for Autumn/Winter 2019, it sounded a note of quiet triumph for Virginie Viard. Karl Lagerfeld’s anointed successor had just proved that Chanel was indeed safe in her hands. Her couture debut was infused with elegance, restraint and a perceptive grasp of what the Chanel customer expects. And it oozed confidence. Not at all the holding pattern that one might logically expect after such a dramatic change of circumstances.

But what would a holding pattern after the passing of Hurricane Lagerfeld look like anyway? His protean in-the-moment hunger for everyone, everything, everywhere meant that his collections were often gigantic grab-bags of past, present and future. Like a library taking human form. And Lagerfeld’s libraries were legendary. Viard shares a love of books with her dear, departed boss. She celebrated it in Tuesday’s show. 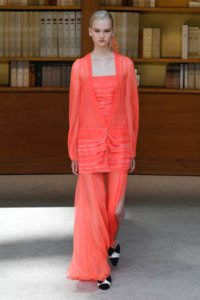 We were still in the Grand Palais, still plonked down in a massive set, a huge, circular library, but significantly Chanel’s, not Lagerfeld’s. More bookish. Many of the models wore reading glasses, with their hair side-parted, pulled back in a sleek ponytail, brows emphasised to give them a serious look. Yes, bookish, with librarians’ tweeds and flat shoes to match. But I’m underlining the -ish in bookish. This librarian looked like a million bucks. The tweeds floated to the floor in feather-light coat dresses and pantsuits, or they re-emerged in vibrant skirt suits with big powerful shoulders (you can’t fight a good education). Feuillété lapels and collars fluttered like the pages of a book. Kaia Gerber’s vivid pink jacquard suit was yoked with origami flowers, paper transformed again. It was a subtly impressive elaboration on the library theme.

And then the show got dressier – and better. The tweeds glittered. The decoration intensified, in a cerebral way. Monochrome flowers trailed the neckline of a one-shouldered gown. There were fantasy pieces, like a bandeau clotted with surreal florals, or a pair of densely embroidered trousers, but they were paired with strong simple pieces: a white crepe skirt, a navy silk happi coat. Marjan Jonkman’s red velvet dress, like an elongated dinner jacket, had a Hitchcock blonde oomph. It was followed by a bow-tied, bib-fronted, high-collared, white-cuffed black velvet dress which managed the strictness of Lagerfeld’s beloved Vienna Secession, and the manstyled purity of Chanel’s own inspiration. 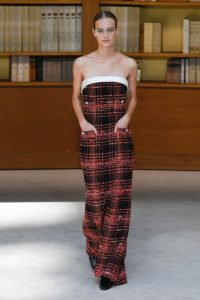 The show closed with a series of slender, sober and ravishing evening gowns. And then The Bride, couture’s traditional closer, but this one in blush-toned plissé pyjamas, trimmed with feathers. It was a louche, witty riposte to convention, proving that Viard learned her lessons well from Lagerfeld. She took her bow in t-shirt and jeans. I hope she felt good about the day.