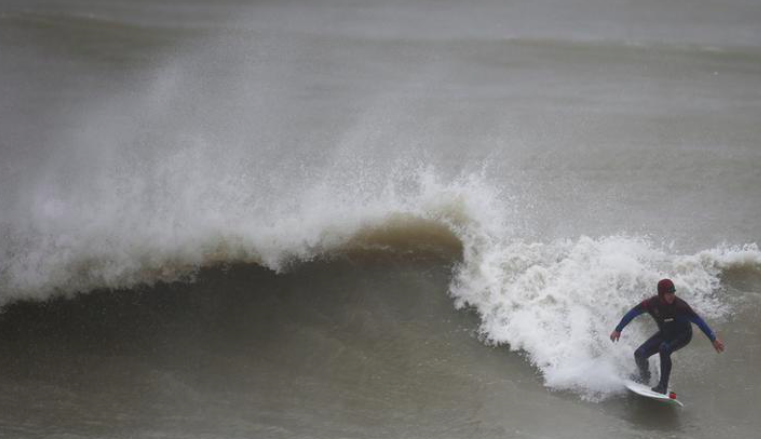 The findings highlight the omnipresence of superbugs and the peril they might pose even for healthy people participating in water sports, said lead author Anne Leonard, a research fellow at the European Centre for Environment and Human Health at the University of Exeter Medical School in Truro, England.

“When people think of superbugs and antibiotic resistant-bacteria, they think of the hospital,” she said in a Skype interview. “But there’s evidence that new resistant genes could be evolving in the environment and getting into people.”

“Protecting our environment will have a multitude of benefits,” she said.

Because surfers swallow more seawater than other swimmers, Leonard expected to find more antibiotic-resistant bacteria in their guts. But, she said, the study found more than she expected.

Researchers analyzed fecal samples collected in 2015 from 273 volunteers, including 143 who were frequent surfers or body-boarders in UK waters.

Surfers and body-boarders had triple the rate of E. coli resistant to the antibiotic cefotaxime in their fecal samples. Thirteen surfers, compared to four non-surfers, carried bacteria that would continue to grow even if treated with cefotaxime, one of the few antibiotics used to treat serious infections.

Surfers and body-boarders also were four times more likely than non-surfers to have in their bellies E. coli containing a mobile gene that makes bacteria resistant to antibiotics.

Therefore, the gene can pass between bacteria and spread the ability to resist antibiotic treatment.

People likely to have been exposed to antibiotic-resistant bacteria in other environments were excluded from the current study.

But because participants were not screened for the presence of antibiotic-resistant bacteria before surfing, researchers cannot positively attribute the presence of bacteria to the coastal waters.

So, Antibiotic-resistant E. coli can be harmless, and it is possible that the bacteria might be gone from the surfers’ guts in a matter of months, Leonard said. But antibiotic-resistant bacteria can lead to gastrointestinal symptoms, urinary-tract infections and meningitis.

The United Nations Environment Assembly recently recognized the spread of antibiotic resistance in the environment as one of the world’s greatest emerging environmental concerns.

Nevertheless, the study’s findings need not prompt surfers to quit, Leonard said. Surfers concerned about their exposure to antibiotic-resistant bacteria in the ocean can try to check the water quality before swimming and may want to avoid surfing after heavy rain, when sewage and manure fertilizer is more likely to wash into the sea, she said.

“We are not seeking to discourage people from spending time in the sea, an activity which has a lot of benefits in terms of exercise, wellbeing and connecting with nature,” said senior author William Gaze, a University of Exeter Medical School professor.

“It is important that people understand the risks involved so that they can make informed decisions about their bathing and sporting habits,” he said in a press release. “We now hope that our results will help policymakers, beach managers and water companies to make evidence-based decisions to improve water quality even further for the benefit of public health.”

Dr. Brenda L. Coleman, an epidemiologist and professor at the University of Toronto’s Dalla Lana School of Public Health, agreed that although waterway pollution from antibiotics must be mitigated, it should not keep surfers out of the water.

“Surfers should not quit surfing,” said Coleman, who was not involved in the study.

“Researchers and public health officials need to determine whether it would be beneficial to bathe after an outing in the sea to reduce further exposure to E. coli and other waterborne bacteria.”

“Ultimately, humans need to reduce the consumption of antibiotics, for human and animal use,” she said in an email.

Find more and more news about what you love to live, click here!

In Italy The first Social to make interact fashion professionals

Fashion and music protagonists at the European Music Awards