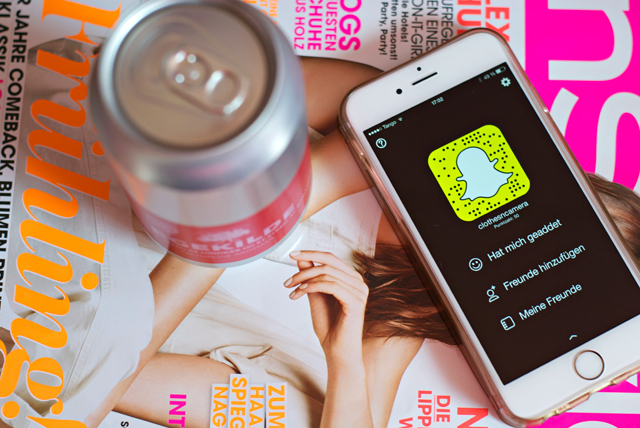 Many brands fled Snapchat for greener pastures on Facebook and Instagram. But those that stuck around have found Snapchat is a winning platform to reach Gen Z

There are clips of employees driving golf balls into coffee mugs, bumping into each other in the hallway and unveiling ridiculous prototypes in meetings, including a visor that is actually just the plastic insert of a bike helmet.

The Snaps, which typically feature employees wearing Chubbies products, last about 15 to 30 seconds, and while they aren’t all that sophisticated, plot or production-wise, they keep the brand’s followers entertained.

“We’ve actually seen an inverse correlation between dollars invested in video content on Snapchat and high engagement,” Chubbies Chief Marketing Officer Tom Montgomery said recently with a laugh. “Putting tons of production value into Snapchat comes off as inauthentic to our audiences.”

When Snapchat first broke out, all sorts of brands rushed to the platform to share their latest products and campaigns. The direct messaging platform, which was founded in 2011 and went public in 2017, is best known for messaging photos that disappear after 24 hours, though it has steadily added features, including augmented reality lenses and filters, as well as group video chats and gaming.

Over the years, though, many have abandoned Snapchat, confused by how the platform works and discouraged by declining views. Today, Snapchat’s audience pales in comparison to Instagram, Facebook and even relative newcomer TikTok.

But brands like Chubbies that stuck it out are finding success as more users flock to Snapchat. In its most recent earnings report, Snap Inc. said it had 203 million active users, up from 188 million a year earlier. Teens are driving those numbers — 90 percent of users are between the ages of 13 and 24. Revenue is also up 48 percent.

Snapchat is bouncing back at a time when private messaging platforms are becoming the social media of choice. Snapchat has also found its niche for fashion advertising, since teens are precisely the demographic many brands are looking to target.

The trick for brands to flourish on Snapchat is adapting to its unusual format.

“It still baffles my mind to hear that some brands are not on Snapchat,” said Brandon Doyle, the chief executive and founder of digital marketing agency Wallaroo Media. “I think it’s harder to win on Snapchat, but the fruits of your labour are more valuable.”

When Snapchat launched in 2011, its disappearing photos and “Stories” timeline appealed to people fed up with Facebook’s crowded newsfeed. Some saw Snapchat as a potential threat to unseat its rival as the dominant social media service. Within two years, Snapchat had nabbed over 30 million users who were sharing 350 million photos a day.

Facebook tried to buy Snapchat for $3 billion in 2013, but was rebuffed by founder Evan Spiegel. Instead, it nearly crushed its would-be rival. Instagram launched its own Stories feature in 2016. Snapchat views fell 40 percent that year according to social analytics firm Delmondo. A redesign in late 2017 was poorly received.

By mid-2018, Instagram Stories had 400 million active users, more than twice as many as Snapchat. Brand followed users, with Burberry, Coach, Everlane, Cole Haan and Warby Parker among the companies that scaled back or closed their Snapchat channels. Kylie Jenner declared Snapchat over in a February 2018 tweet.

A day later, Maybelline asked followers in a since-deleted tweet whether it should stay on the platform, citing a dramatic drop in views. Jenner still actively uses Snapchat. Maybelline does not.

Media brands fled as well. In 2018, Condé Nast shut down the Snapchat channels for Vogue, Wired and GQ.

While it does not have as many users as Instagram or Facebook, Snapchat is still picking up steam among Gen Z. Snapchat says it reaches 75 percent of teens in the US. Facebook and Instagram also have an older average user age, 25 to 34.

Getting in front of young audiences is important for brands; Gen Z holds $44 billion in buying power, according to the National Retail Federation. Young shoppers are also easier to convert because they are less likely to have developed strong brand loyalties.

Gen Z has taken an affinity to Snapchat precisely because its metrics are hidden; the platform is not fueled by the number of likes, comments and views.

“Snapchat’s power on Gen Z is that it’s a place for content, and for content only,” said Alison Bringé, chief marketing officer of fashion data analytics platform Launchmetrics. “There’s no pressure to like an image. The user is there to have a good time.”

In May, Instagram started experimenting with hiding likes in Canada and in late July it expanded its test to six other countries.

It’s not just that teens prefer Snapchat; they are also highly engaged on the platform. Snapchat users under the age of 25 spend about 40 minutes a day on the platform, higher than Instagram’s usage, according to Omnicore, a digital marketing agency. Snapchat’s user demographic is also extremely loyal to the platform; 92 percent of its users exclusively use Snapchat, according to App Annie.

How fashion brands should use Snapchat

Selby Drummond, a former American Vogue editor, said when she joined Snapchat as head of fashion and beauty last year, was not surprised to hear that many brands had abandoned the platform. She said many that left were pursuing a flawed strategy where they posted the same content across social media.

“A lot of fashion brands have been confused about how to use Snapchat because it was not built as a stage for brands to show off their products,” she said. “You can’t just post a picture and get likes. Users are coming to engage with and connect to friends, and it’s an opportunity for brands to talk to loyal audiences, not post their latest ad campaign.”

The most successful fashion brands on Snapchat avoid the glossy “Instagram aesthetic.” Huda Kattan, the founder of Huda Beauty, said that her team “posts much more intimate, deep or raw content on Snapchat, whereas Instagram is a bit more polished.”

“They like real content that is much more organic,” she said of her brand’s Snapchat following. “It’s a great way to story-tell with our brand in a much deeper way. It is much more personal, but that’s what the audience reacts well to.”

Brands are also paying for Snapchat technology. Prada has begun placing buttons in their stores that allow users to access special Snapchat lenses, where special codes give users access to cartoon-like 3D Prada graphics for their Snaps. Young shoppers might not be able to buy Prada products, but they can access the brand via Snapchat augmented realities.

A lot of fashion brands have been confused about how to use Snapchat because it was not built as a stage for brands to show off their products.

In May, Louis Vuitton used similar technology at the VivaTech conference in Paris that unlocked a virtual bag for visitors to “take home,” promoting the concept that digital fashion products are valuable too.

“Fans and followers are actually watching entire video ads on Snapchat, but if you look at the user journey on Instagram, they typically click right out,” said Bringé. “If you are comparing advertising opportunities, Snapchat is actually bigger than Instagram.”

Snapchat even recently built a sales team dedicated to working with direct-to-consumer brands. Companies like Curology, MeUndies, Brooklinen, Quip and Away now regularly advertise on the platform.

Some fashion publishers that have stuck with Snapchat have also found success by pivoting their strategy over the years.

Cosmopolitan was one of the first publishers to use Stories in 2015. The magazine experimented with all types of content but eventually switched from fashion and beauty to topics like celebrity news and YouTube influencer feuds, said Mia Lardiere, Cosmo’s Snapchat editor.

“Kids have grown up on YouTube so that’s what they like seeing,” Lardiere said. “In general, the strategy is to be nimble because Gen Z has a short attention span.”

In general, the strategy is to be nimble because Gen Z has a short attention span.

“On Instagram, we see fashion and style works, but on Snapchat it doesn’t,” Marks said.

Self, another Condè publication, launched on Snapchat in 2017. Even though its print magazine, which shuttered in 2017, skewed towards an older reader, Self’s unique views on Snapchat have jumped from 8 million a month to 12 million a month in 2019, with its Snapchat content leaning heavily into health and wellness, said Carolyn Kylstra, Self’s Editor in Chief.

Snapchat is also being used to convert young readers to New York, added Devon Sherer, New York’s Snapchat editor who posts content from Vulture and The Cut. The magazine has seen a 171 percent growth on Snapchat this year.

“There’s a lot of brands on the Discovery page doing grabby headlines, but it’s important to remember that this audience is not dumb,” said Sherer. “They like good content, delivered well.”

End of an era: the angels of Victoria's Secret no longer parade

The material architectures of A-cold-wall