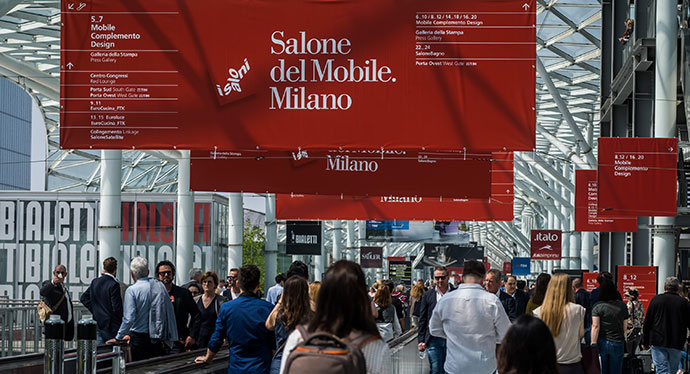 The Salone del Mobile in Milan has turned into a huge resonance box for luxury brands. Never before this year have the brands presented so many initiatives and of such varied kind at the Fuorisalone, that is the “off” program, which develops in parallel with the Salone del Mobile throughout the city. In fact, the fashion evenings are among the most popular of the Design Week, judging by the crowd that crowds in front of each event, as well as the most exclusive initiatives reserved for the few happy few, which make Milan the place where you absolutely must be this week.

Every evening, the streets of the Lombard capital are invaded by a horde of design and architecture enthusiasts or professionals, as well as the innumerable tourists who want to live this immersive experience and be carried away by the spectacle of installations that are as unexpected as they are spectacular. The city vibrates every day in a festive atmosphere, offering many surprises.

On Wednesday, for example, a lucky few were able to discover “the chamber of wonders” imagined by the designer Massimiliano Giornetti, who worked for Salvatore Ferragamo for 17 years. A capsule collection of furniture made in collaboration with the Florentine company Artecornicidesign, exhibited for a single day in the magnificent halls decorated with frescoes from the Tommaso Calabro art gallery, which has just opened its doors in a seventeenth century palace in the heart of Milan .

“It is a collection of” haut mobilier “somewhat in the manner of haute couture, composed solely of handcrafted pieces that tell of a dreamlike journey into the world of decoration. I wanted to recover this very Italian taste for decoration, letting myself be inspired by my attraction for the East “, explains the designer, who recently left the art direction of Shanghai Tang and is working on personal projects. Lacquered boxes, wooden screens decorated with small paintings, furniture painted with lush patterns make up this line, which will be sold in a limited selection of shops.

The night before, Tuesday 9 April, it was Christian Dior who created the event in the famous Milanese shop Antonia. Music, champagne and classical dance were on the menu of this exclusive evening, while the brand occupied the windows and an important space of the store with a selection of its line for Summer 2019.

“I’ve known Antonia for a very long time. It’s a very special initiative, because usually Christian Dior is not sold in multi-brand stores “, explains the artistic director, Maria Grazia Chiuri. “I wanted to be present in Milan also to support“ The Unexpected Subject ”, which has just opened at Frigoriferi Milanesi thanks to the support of Dior, one of the main sponsors of this exhibition. The initiative highlights the relationship between visual arts and the feminist movement, a theme that is close to my heart “, he continues.

A little further on, the celebrations were multiplying in a crowded Brera district. Hermès presented its new collection for the fashion house in the large La Pelota space with musicians and pastries. Etro received in his store in Via Pontaccio dedicated to the home line, while just in front of Philosophy di Lorenzo Serafini, the young line of Alberta Ferretti, installed himself in the multi-brand Clan with a pop-up store on the theme of nomads. A further way, Angela Missoni has unveiled a colorful installation by artist Alessandra Roveda in her showroom.

From Monday (8 April), several brands had already launched their initiatives, to gain visibility before the official opening of the Salone del Mobile, which debuted on Tuesday and runs until Sunday 14 April. Like Tod’s, who set up a project for the first time in effect dedicated to the furniture fair, “No_Code Shelter: Stories of Contemporary Life”, in a large space inside the Leonardo Da Vinci Museum of Science and Technology. The idea was to explore the different ways in which contemporary life is seen through interviews with eight personalities, including artists, designers and stylists of different ages and backgrounds. These interviews are projected on screens installed each in huts-shelters redesigned by the architect Andrea Caputo, who signed the installation.

Another original installation is the one proposed by Cos, the highest range sign of the H&M group, conceived by the French architect Arthur Mamou-Mani, who built a structure composed of 700 wooden and bioplastic cone baskets, ethereal and transparent , printed in 3D, placed between the courtyard and the garden of the historic Palazzo Isimbardi in the form of a giant arch.

The same evening, Giorgio Armani turned on the Tortona district, where the Fuorisalone was born before spreading throughout Milan, with the inauguration of the exhibition “The Challenge-Tadao Ando”, dedicated to the famous Japanese architect inside his museum Armani / Silos.

A good opportunity to rediscover the work of the Japanese, who worked for various big names in fashion. Like Giorgio Armani himself, for whom he built the Armani Theater, but also François Pinault, for whom he is currently working on the restructuring and expansion of the Paris Commerce Exchange, or Luciano Benetton, for whom he created the Fabrica center. The patriarch of the Treviso group was present at the inauguration along with other personalities.