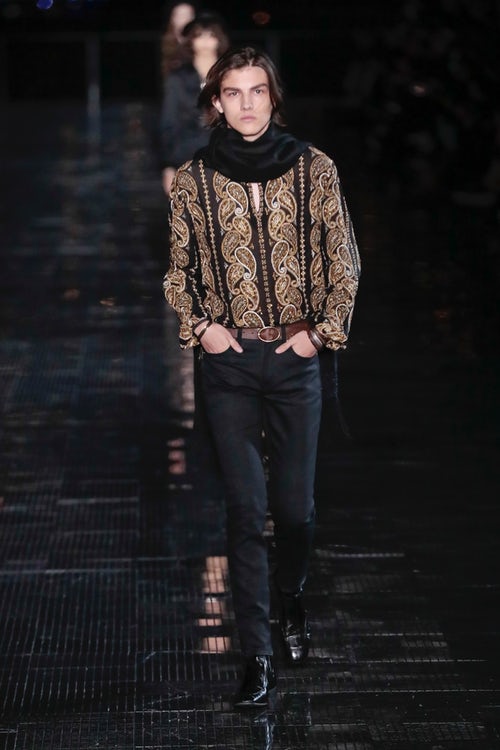 Anthony Vaccarello’s first fully-fledged men’s show was pleasantly familiar. But it wasn’t quite his own.

Shipping the fashion throng to Jersey City via boat in 2018 is akin to shipping them to Brooklyn in 2008: They’ll only complain until they land on solid ground, quickly realising that it’s not too far after all.

It was clear stepping out onto the set floor — made of dark grey tiles that looked like jumbo Lego pieces — why Anthony Vaccarello chose this particular Jersey City pier for his first (mostly) men’s runway outing. The designer, who arrived at Saint Laurent two years ago, has taken to staging his show against iconic backdrops. In Paris, it was the Eiffel Tower. In New York, you have to leave the island to get the money shot. For the finale, Vaccarello sent his boys out topless, their chests dusted with metallic silver paint, generating a glittering stream of light that held its own against the skyline.

Showing in New York, before the official start of the city’s men’s schedule, checked off other proverbial boxes. It was, first and foremost, a declarative statement. Vaccarello wants the world to know that he is as serious about men’s fashion — which has developed quite slowly since his arrival at the house two years ago — as he is about women’s. And it happened in North America, a market where sales are still growing at a rapid pace: up 27 percent in the first quarter of 2018.

The clothes themselves were not so declarative, however. His main ideas were grounded in 1970s Saint Laurent, including what Yves wore himself, but reconfigured for the contemporary customer who might be inclined to indulge in high-heeled cowboy boots, a laced-up Safari jacket, silver concho belt or a killer pair of bootcut jeans. But there were also what now feel like signature Hedi Slimane-era moments: the impossibly skinny jean, suctioned onto impossibly narrow models, wearing porkpie hats on their heads and bandanas tied around their necks.

Love or hate his single-mindedness, it’s undeniable that Vaccarello immediately imprinted his Saint Laurent women’s collections with his own mark. His efforts have never felt like a Slimane redux.

In this men’s collection, the fine detailing (such as feathers cut into floral motifs and embroidered onto a bomber jacket) and array of silk blouses — one done in an elegant paisley, another woven with streamers of metallic yarn — were the beginnings of something to talk about. However, too much of the collection felt too familiar, too reliant on what has come before. The exception was when the women wore the men’s clothes: the relative roundness of their bodies softened each look, forcing the observer to think about them differently.

“I’m not going to break something that I would not break for myself,” Vaccarello said to a scrum of reporters backstage after the show. “I’m just doing what I want.”

One could argue that it’s a good thing these clothes didn’t feel new. Saint Laurent has ambitions to be a $3 billion brand, and reliable, consistent styles that have successfully wooed consumers in past are essential to future growth. But the reason this approach works so well for, say, Kering stablemate Gucci is because there’s a dream attached to the reality. Vaccarello needs to dream a bit more.

If you want to know more about Saint Laurent, click HERE ! 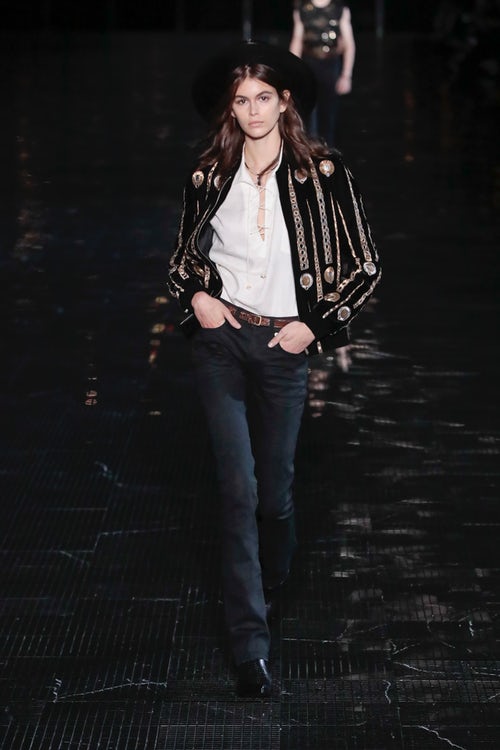 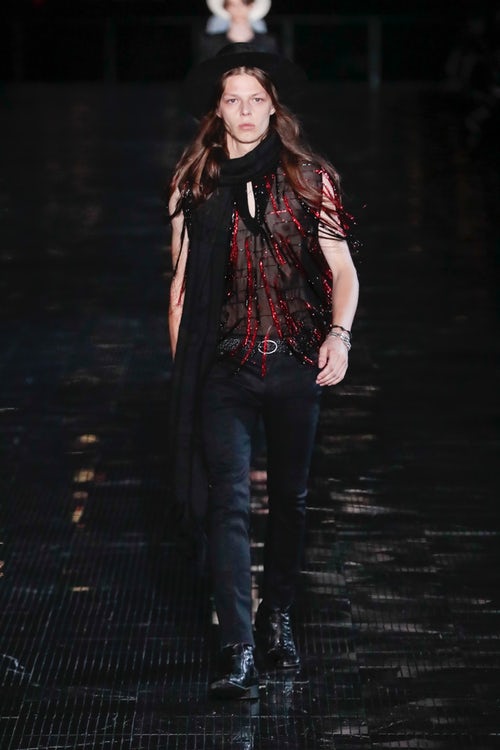 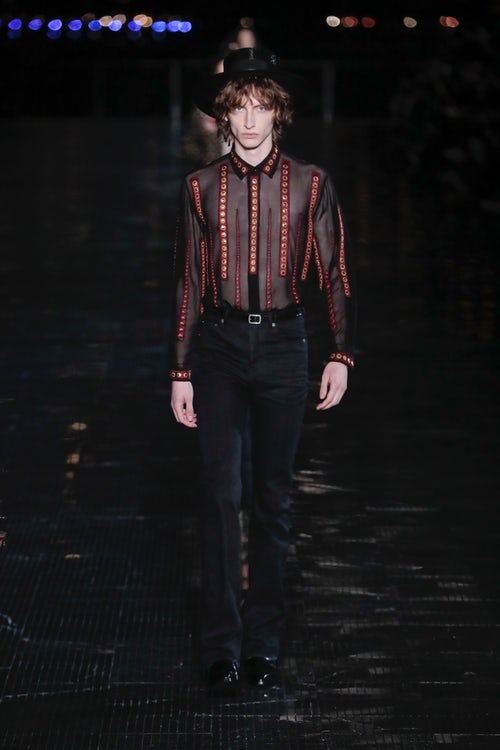 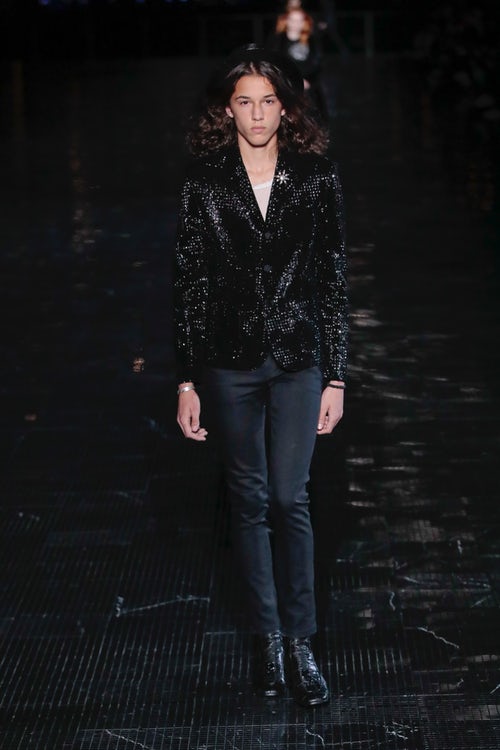 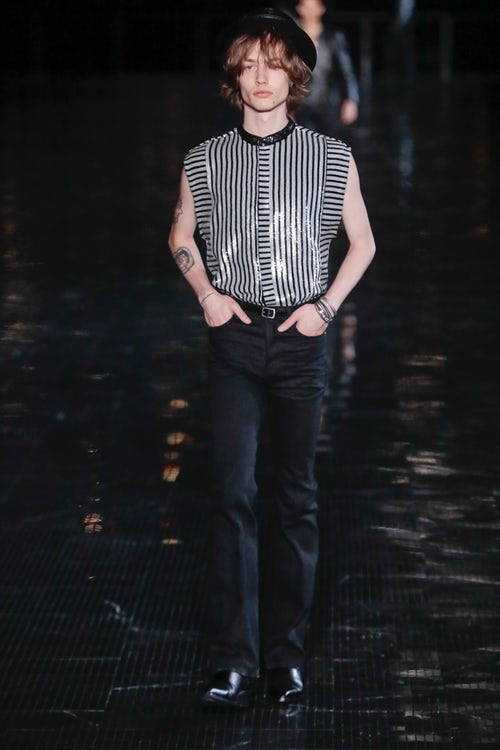 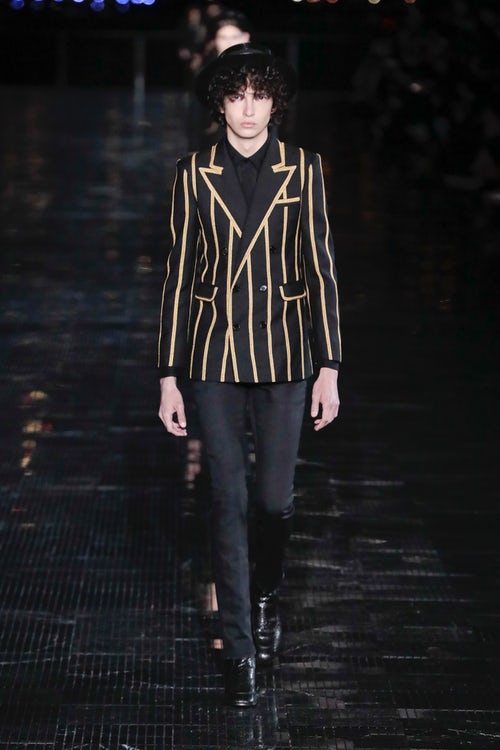 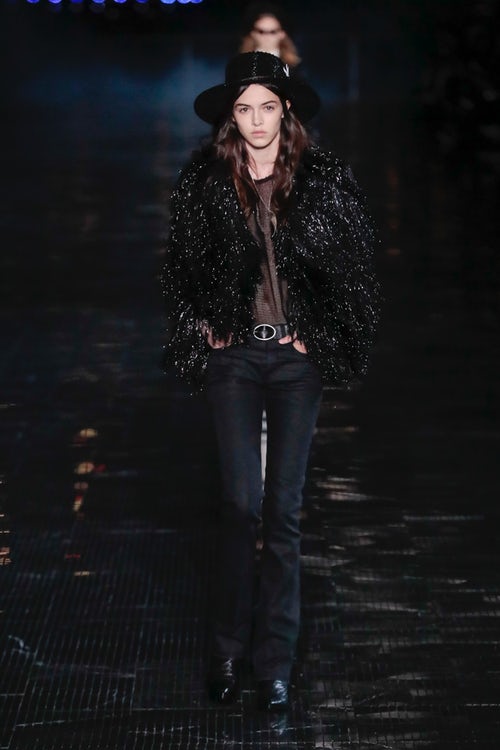 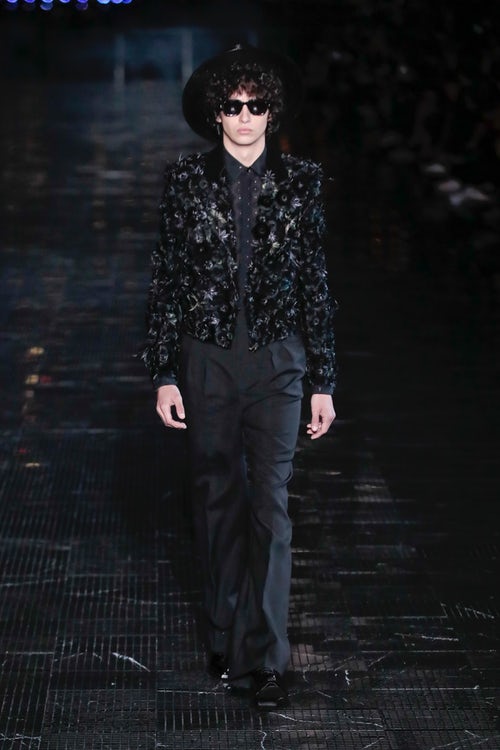 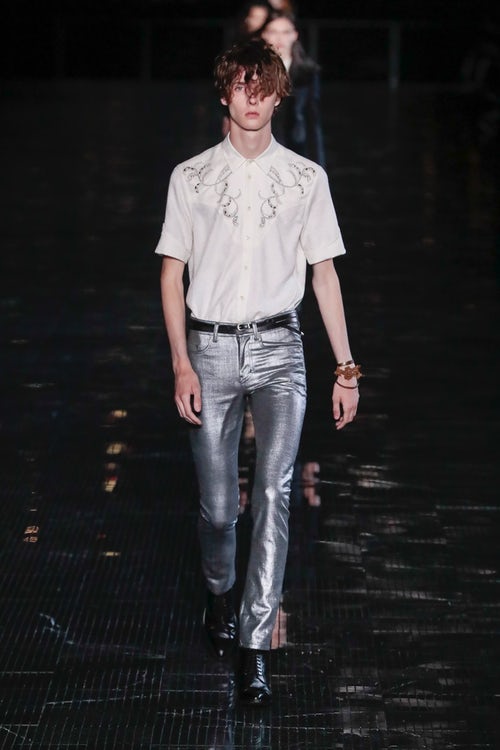 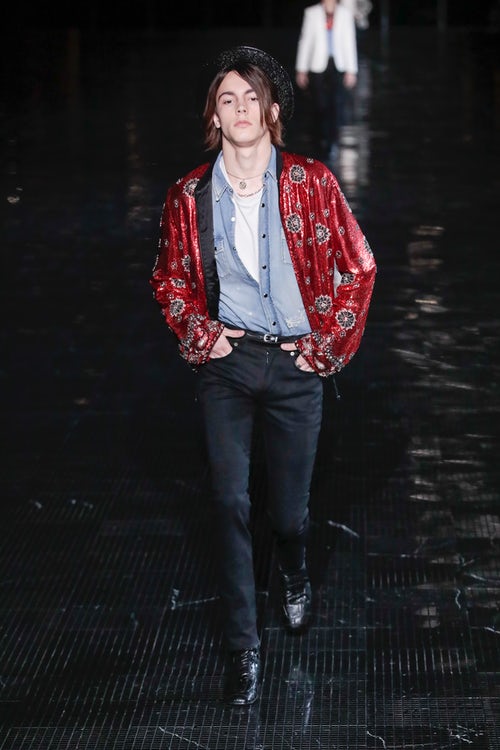 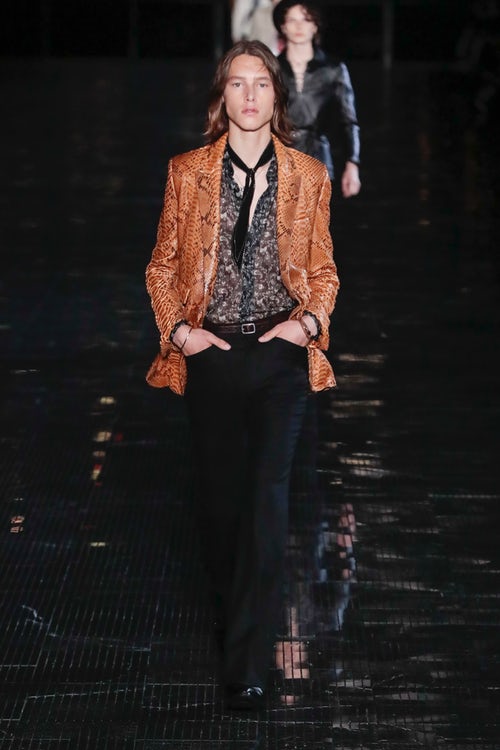 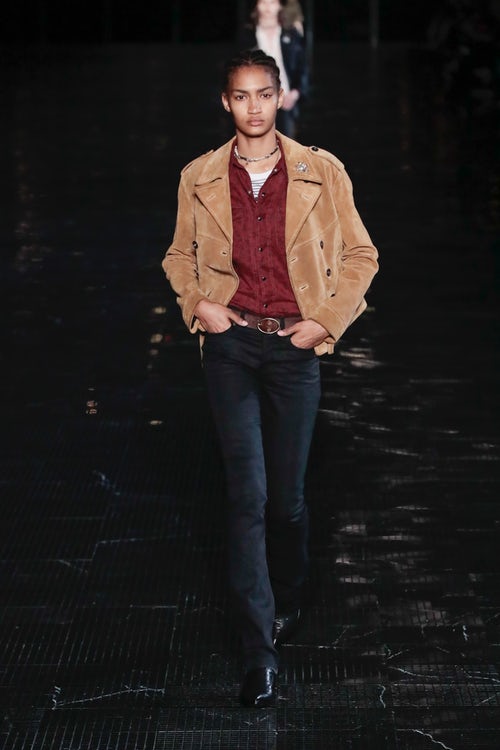 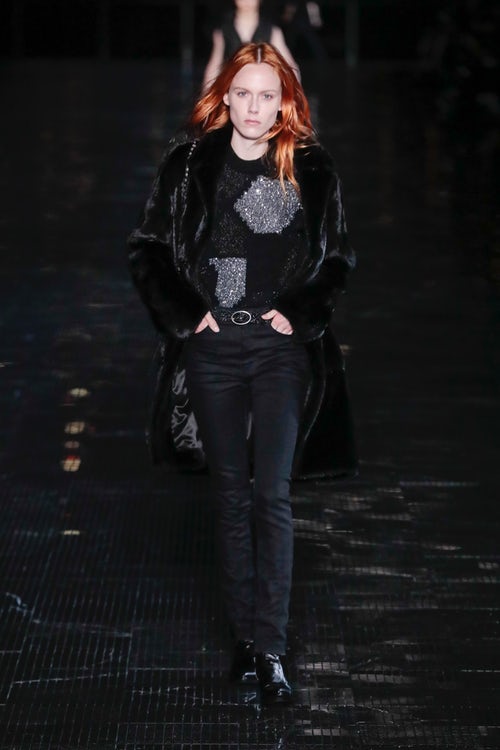 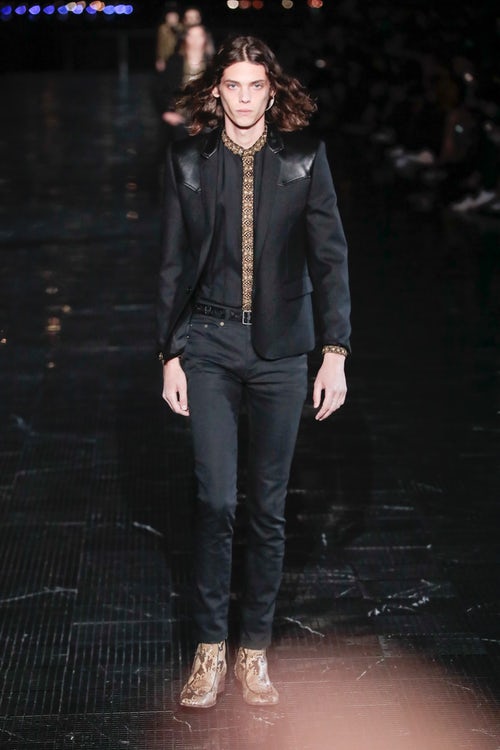