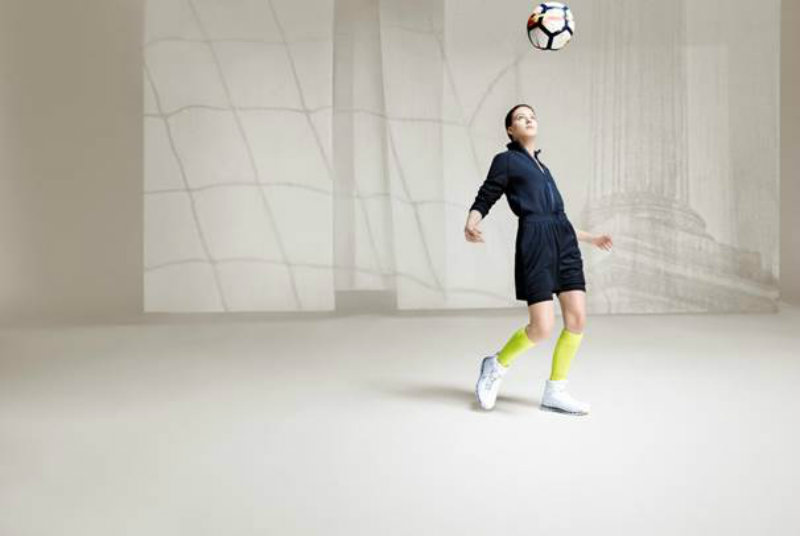 Fashion designers Virgil Abloh and Kim Jones approach the world of football from two different perspectives, so Nike prepares for the 2018 World Cup

For Virgil Abloh, football is an opportunity to mix memories of youth, like listening to hip-hop music going to high school football games, with an adult interest in combining lifestyle and sport branding. For him, football is big and full of nuances with high visual impact. In one word his collection is instinctive.

Kim Jones, on the other hand, uses football to explore the sentimental side of fashion. The traditional football uniform, made up of shorts, knit and pre-match jacket, is reworked through cuts that alter the perception of the proportions of the body. The result is a punk-like look typical of London in the late seventies, which draws on the collective imagination linked to the concept of uniform, reinterpreting it.

“The nice thing about the vocabulary and the history of football is that aesthetically it has its own path. I have always found inspiration from the way in which the European teams present the sponsor printed on the uniforms. When I was working on the collection, I wanted to celebrate the different typographic variations “emphasizes Abloh.

The numbers refer to those brought by Abloh when he played football. The black and white jersey chessboard is a delicate reference to Czech uniforms, while the team logo, a juggling lion, pays homage to the ubiquitous coats of arms and the polka dot pattern created by Abloh to find the optimal point where the foot should be easier during the game. hit the ball.

His shoe, the Nike Flyknit Zoom Fly, is the real starting point of the collection and reconnects to the Virgil version of the Nike Mercurial.
“I wanted to communicate the point at which a player hits the ball, so I applied polka dots as a reference on the shoe. If you are about to kick, your foot / eye coordination is practically the only fortune variable. It is with what started the collection, with these running shoes that try to be the same as a field shoe, so you can train subconsciously continuously. Then comes the aesthetics “, he explains.

The starting point for Kim Jones was the golden days of London’s King’s Road. The designer has indeed been able to mix the avant-garde tailoring with technical materials.

“The silhouette of the punk era was based on a continuous play of proportions able to increase the power of the wearer. I was fascinated by the idea of do-it-yourself: cutting and putting the pieces together to create something new, “says Jones. The same idea, at the base of the process and the aesthetics of the items in Jones’ collection, is also transferred to the shoe he designed: a hybrid of his favorite sneakers, which requires a second look to reveal their references. But Jones is sure of his grit. “I looked at the shape of the Mercurial along with my three favorite Nike shoes: Footscape, Vandal and Air Max 97. Bringing them together in one shoe is a tribute to punk, but with a very sophisticated end product,” he says.

Mystic Bag by Givenchy: this bag could become the most important it-bag of the summer 2019

Dior, partnership with Technogym for wellness at home