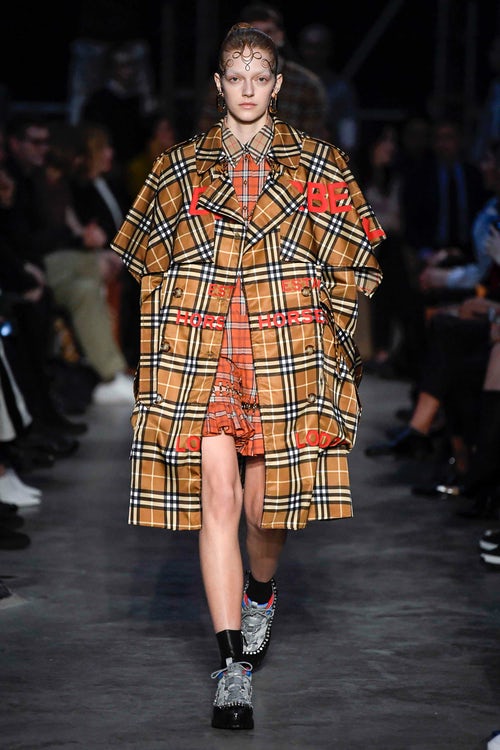 High/low fuelled his debut last season, and it was delivered here with a quantum leap in polish. But as much as he talked about “writing the book of Burberry,” there were plenty of echoes of those early days at Givenchy

“Kids today don’t have a voice anymore,” Riccardo Tisci declared to the throng of journalists assembled after the Burberry show on Sunday night. “They’re scared to express themselves.” 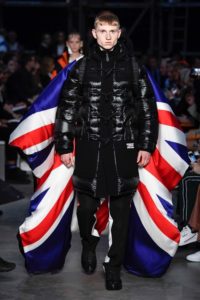 One could beg to differ after a week when kids in the UK seemed anything but scared to express themselves on the issue of climate change.

But Tisci’s grilling showed how much he is still coming to grips with the finer points of life in the UK. He structured his show with his idea of a study in time-honoured contrasts: the street and the stately home.

It was externalized in the way the audience was split: gold invites in a formal, tiered theatre, silver invites inside a huge metal cage, with kids clambering all over it like a G-rated Thunderdome.

Tisci wanted his audience to have very different experiences, quite why wasn’t quite clear. 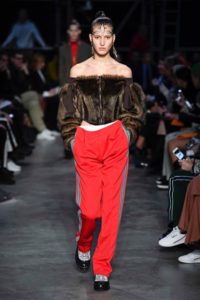 High/low was the same notion that fuelled his Burberry debut, but it was delivered here with a quantum leap in polish. Last time, Tisci started with the chic and worked back to the street. It felt clumsy and incoherent. Here, logic ruled. The show told a story with steadily building momentum, from mutant rugby stripe dresses all the way to red carpet gowns. There were still more than 100 looks on the runway, but the rhythm was gonna get ya when there was this kind of flow.

And maybe Tisci was feeling more himself than last time. As much as he talked about “writing the book of Burberry,” there were plenty of echoes of those early days at Givenchy when the ballers and babes of LA’s barrios were turning him on. The casting of the male models, for one thing. The huge, chunky outerwear for another. One broody, bulky guy was bulked still further with a teddybear parka. Then he was slung with a tiny quilted purse on a gold chain. That felt like The Total Tisci.

Part of (re)writing the Burberry book for him is clearly staking his own claim to the heritage. Burberry Kingdom, Tisci calls it. He draped his boys and girls in huge regal puffa capes or sweeping silk and cashmere blankets. (One was waggishly printed with “The Rime of the Ancient Mariner,” 143 verses of 19th-century gloom and doom by the Romantic poet Samuel Taylor Coleridge, who disobligingly died in 1834, the year before Thomas Burberry was born.) Tisci also printed the address of his kingdom — Horseferry Road, the location of Burberry’s HQ — on bags and coats, though this was slightly less impressive, given that it was an office block until 2008. 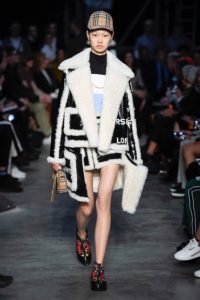 A kingdom is stratified by class. So is Tisci’s Burberry: aristocrats and commoners. (Hey, I just got it — that was the rationale of the seating plan.) In his debut, the aristocrats got the good clothes. Here, the balance was adjusted. The sporty, streety stuff looked much more seductive, while the aristos overdosed on camel, which ended up looking a lot more MittelEuropa than BritPosh.

Natalia Vodianova in the cream suit with the pleated skirt, matching blouse and tie, slicked back hair and red lip? Much too “done.” On the other hand, Fran Summers in a fiercely tailored skirt suit in olive-toned leather sent a universal message. 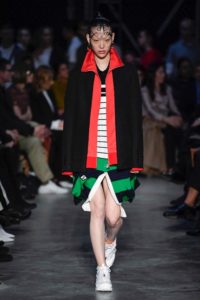 Which is probably, ultimately the point. While Tisci pays lip service to Brit tradition, he’s going to build his own little Burbworld.

But he still wouldn’t say what he thought about Brexit.

Calvin Klein Is Closing Its Ready-to-Wear Business. What Happens Next?

“Hold me” by Sophia Webster: the bag that catches you