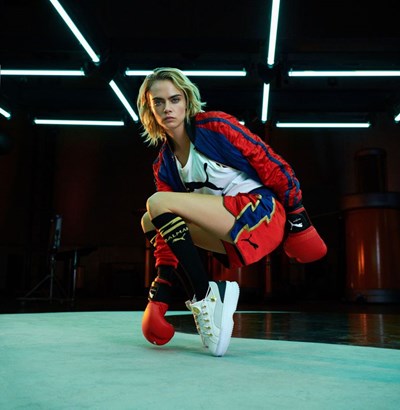 The British model and the creative director of the French fashion house, Olivier Rousteing, have created a collection of 35 pieces produced by the German brand. The launch is scheduled for November 21  with a party in Los Angeles

Puma, Balmain and Cara Delevingne reveal their triple co-lab. The creative director of the French fashion house Olivier Rousteing and the brit model have created a capsule inspired by Puma, a brand for which Delevingne is ambassador since 2016. The launch of the line is scheduled for November 21 and will be celebrated with a party at Los Angeles.

“Being able to mix Puma’s sporting legacy with Balmain’s historical high fashion heritage has taken this collection to the next level. We look forward to continuing the partnership with Cara and Balmain in the future, “said Björn Gulden, CEO of Puma.

Rousteing and Delevingne have thus confirmed their already firm bond, both personally and professionally. The two, close friends, have already appeared in a Balmain advertising campaign and the model has also collaborated with the designer for a collection of three bags. However, it is the first time they work together on clothing.

It is also the first time that Cara Delevingne has designed a collection for Puma. The line includes clothing, footwear and accessories and is divided into two sub-collections. Some will be produced and sold by Puma, others by Balmain and some by both brands. The capsule includes red and blue boxing shorts, color-block bomber jackets, hooded sweatshirts, leggings and striped t-shirts.

“Puma has always represented teamwork and empowerment, so the idea of ​​a partnership with Olivier seemed very appropriate,” said Delevingne, adding that “I was really excited to think about what we could all do together.”

“Cara can be a tomboy at a time and very glamorous later. He is equally at home on the red carpet as well as on the streets of London or Los Angeles, “said Rousteing. “He has a very clear vision of fashion and is therefore very attentive to what he creates,” the designer added.

The collection also stems from the passion they both nurture for boxing. This sport, on the other hand, inspires the campaign dedicated to the capsules, chw sees Delevingne starring with a cast of models. The images were taken by the New York photographer Brianna Capozzi, while the creative direction is by Philippa Price.

The project represents another opportunity for Balmain to capture the attention of young consumers. “The Balmain universe speaks to an entire generation of young people who do not always have access to this type of products, so it is important for me to be able to offer them at different prices,” said Rousteing