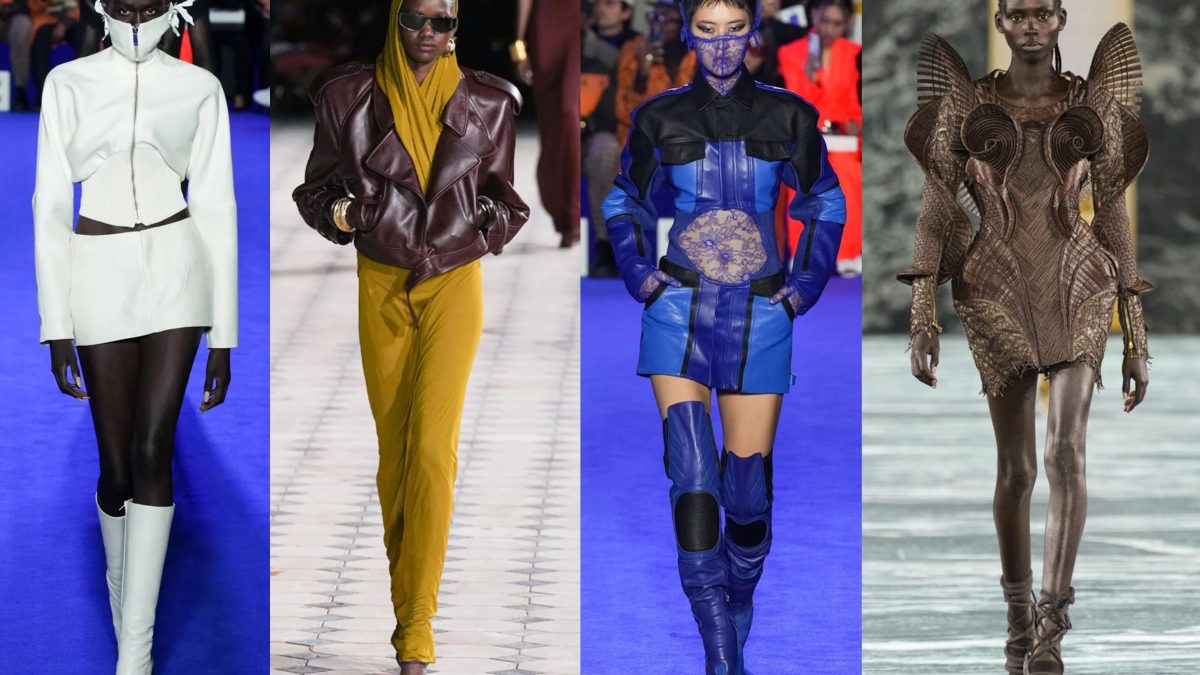 After New York, London and Milan, it is time for fashion to light up Paris, and vice versa, with Paris Fashion Week 22. The fashion shows and presentations of the Spring/Summer 2023 collection are scheduled from 26 September to 4 October 2022. The calendar of the Fédération de la Haute Couture et de la Mode really leaves daydreaming with 107 super brands between top and new talent. Michele Franzese Moda has selected those who in the first days have already left their mark and created the new, highly anticipated trends. Let’s find out together.

Anthony Vaccarello’s fashion show for Saint Laurent Spring Summer 2023 was truly a spectacle in every sense. Starting with the choice of a suggestive and fascinating location like the Jardins du Trocadéro with a romantic Eiffel Tower in the background: an incredible setting for a fashion show. The soft lights that barely illuminated the fountains and the YSL statue / logo elegantly accompanied the whole presentation. Vaccarello’s collections, since he became creative director of YSL in 2016, amaze one after the other and this is really preparing to become a trend. Very tall models and on equally high heels seduced the audience by parading in very long silhouettes: the long dress in an almost tubular shape, but ready to enhance all shapes, is the absolute protagonist of this collection, in jersey (with an elegant color ranging from bottle green, ink, burgundy, mustard, caramel, gold, black) but often also transparent and was accompanied by the recurring leather trench coat or double-breasted coats with oversized shoulders, always very long. Creations that blend Grace Jones’ 80s with Martha Graham’s 30s, enveloping and spectators, in a world of sensuality and mystery, which also looks to a somewhat futuristic style halfway between Blade Runner and Matrix. The garments are iconic and it couldn’t be otherwise. Vaccarello knows how to crystallize his collections to his audience and transform them into indispensable must haves. A perfect fusion between Vaccarello’s minimalism and YSL’s sensuality in this Paris Fashion Week 22.

Another great show and lesson in haute couture is the one organized by Olivier Rousteing, creative director of Balmain, who staged over 100 looks at the Jean Bouin stadium in Paris with a great creative diversification between inspirations of marble and Renaissance and Baroque paintings and a haute couture selection with a refined yet primordial aesthetic. In fact, the first part of the collection focuses on silhouettes dominated by baroque prints and sculpture dresses built with great sartorial experience. The second part focused on haute couture fascinated everyone with complex dresses, constructed with weaves and draperies with irregular shapes and volumes, evoking at the same time luxury and primordiality also evoked by the prints. The grand finale then was one of the most successful cameos during a fashion show: the iconic and eternal Cher thrilled everyone when she walked the catwalk in all her incredible splendor of her 76 years wearing a low-cut bodysuit and a tight suit. On the notes of her great success, Strong Enough, she closed the show by parading embraced with her friend Olivier Rousteing. A very exciting moment of this Paris Fashion Week 22.

Virgil Abloh’s legacy continues to be alive and well present in the world of high fashion. Ibrahim Kamara, creative director of the brand nominated by Andrea Grilli, stated it explicitly when, after last night’s fashion show, he stated that: “It’s about celebrating him-Virgil-and his legacy”. This Off-White spring/summer 23 collection was in the early stages of its creative process conceived by Virgil before his untimely death in 2021. The creative team led by Kamara relied on the original idea to guide it through to its stages. endings. The show began with the projection of a choreography on a large cube placed in the center of the catwalk. The dancers all painted in blue have begun to anticipate one of the leading colors of the collection. Once the music band on the roof of the cube was unveiled, the models began to parade. The look to the future, Virgil’s typical ability, can be seen from the first female outfit, halfway between Blade Runner and Star Wars, a leather mini dress with cyborg boots above the knee. “Virgil always thought about the future … he was almost in another universe.” Kamara continued to affirm. The navel is always exposed by a large circular hole on almost all women’s clothing while for males the muscular anatomy is evoked by obvious spiral stitching or by clear fabric prints of the shape of the abdomen or chest, almost as if it was a Greek armor. The concept of armor persists in clothes that look almost military built with bulletproof vests. There are also bones printed on a full dress. Post modernity and post humanity. The tailoring focuses heavily on the unfinished effect with cut, semi-built elements, visible and protruding seams. Also in this collection there is the element of the hood as well as that of elaborate collars that even cover the mouth with elements decorated like real cyborgs.