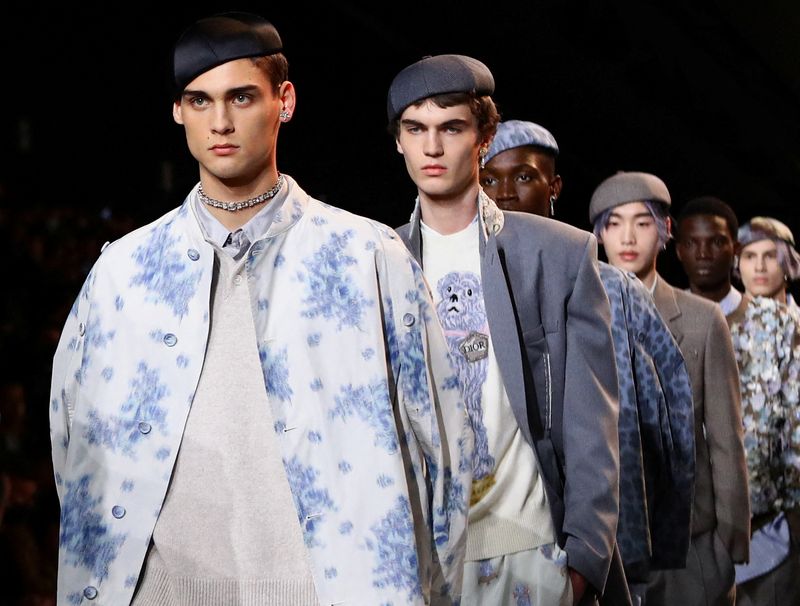 Big name and new generation designer. In Paris, fashion returns to being a show in a more physical Fashion Week

77 shows organized between 42 fashion shows and 35 presentations, here are the numbers of Paris Fashion Week 2022 dedicated to autumn / winter menswear. The event tries to send a message of optimism by orienting itself to a massive proposal of events in presence by adopting a decidedly more physical language than the previous edition riding what should be, hopefully, the final echo of the new pandemic peak caused by the Omicron variant.  Now let’s talk about who among the big brands present has excited with style. Dries Van Noten. His latest collection points to an exhibited variety in which the dress is felt as well as worn “It’s about having fun again”, reads the show’s notes, “touching, kissing people, exploring the forbidden, living carefree” savoring real experiences. Y/Project surprised everyone with a show in which garments guided with flexible metallic threads and sweaters and dresses with intertwined necklines, showed a seemingly infinite variation in the possibilities of wearing them. Walter Van Beirendonck compared to his previous collections has moved away from his usual color blocking and focused on monochromatic color schemes and articulated structures. Using various fabrics with the same hues he created new looks that saw lightweight neoprene-like material constructed in a way that gave a leather-like effect crocodile with its shiny texture. An important focus has been given to the shoulders as an essential body part. Yohji Yamamot or with make-up and hair style inspired by the world of Tim Burton, white makeup and pompous hair sculpted with gray powder, she played in his collection on the idea of ​​the silhouette. The dresses with exposed seams and hems also refer to the aesthetics of the English Dickensian era through the character of Artful Dodger. Rick Owens presents “Strobe” with luminescent headdresses inspired by Dan Flavin and Ancient Egypt proposing to look to the future with mystery and without any reference to the metaverse: “Isn’t it true that all the boys want to be remembered as a heroic wizard standing on a cliff holding a torch? ” he stated at the end of the show. Paul Smith, reinterpreting the purest codes of British style, guides with his collection on a homage journey within the highest auteur cinematography of the 30s and 40s up to the 60s and 70s. Coats, bombers and duffle coats, straight-line trousers, mohair sweaters with contrasting layers: everything evokes a nostalgic return to that vintage world of auteur cinema. Dior on the occasion of Paris Fashion Week 2022 celebrates the 75th anniversary of the Maison with a show by the creative director Kim Jones who tries his hand at giving body to British men’s tailoring techniques with that of French haute couture. An exaltation of all the symbols that Christian Dior had in his heart: the rose, the flowers, the stars and the chains, chains that return in an accessory version. Among the novelties, the launch of the collaboration with Birkenstock with slipper sandals with floral embroidery and in the typical gray so dear to Monsieur Dior. Nigo’s debut as the creative direction of Kenzo starts in 1970. The year Nigo was born but also the year in which Mr. Kenzo Takada held the first show. A reinterpretation of vintage through Kimono and oversized caps with 1970s embroidery, berets and mix & match prints. And then a riot of poppy flowers, daisies and cherry trees: it’s Kenzo’s spring. There are two female “forays” at Paris Fashion Week 2022. Paco Rabanne who amazes with a sensual collection in which contrast is a narrative choice. A journey from the 90s to the future in which the models, real and virtual heroines, wear spotted and sequined sweaters, bodices over ultra-feminine dresses, balloon straps or iconic metal sweaters combined with rich and perfect handcrafted embroidery. Provocation, sensuality, love, I play the keywords. Alaïa instead celebrates beauty with Pieter Mulier. Long dresses in velvet, white, black and nude are the master choices and extravagant, fluffy and voluminous jeans reminiscent of Azzedine’s Spanish-style skirts.

Metaverse and NFT: more and more companies are investing in the virtual world