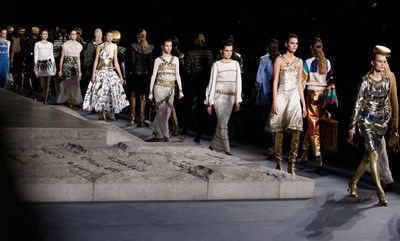 The missing designer will be celebrated on the occasion of his last Chanel show. Among the 76 shows on the calendar, eyes focused on the creative debuts of Lanvin, Lacoste and Nina Ricci

It will be the first Parisian fashion week without Karl Lagerfeld and the eyes, like the thoughts, will all be on the last Chanel fashion show designed by the fashion Kaiser, who passed away last Tuesday. The event is scheduled for March 5, the closing day of the Parisian event, when the double C house will stage a farewell to one of the greatest protagonists of the fashion world.

But it will also be the day of the futuristic wardrobe by Marine Serre (whose fans are Rihanna and Kendall Jenner) and the Portuguese duo Marques Almeida, trained in London and a big fan of denim, whose clients include Beyoncé and FKA Twigs.

On Wednesday, up-and-coming talents and well-known fashion houses will alternate on the catwalk: Lanvin will be followed by Mugler, Maison Margiela, Dries Van Noten and Kenzo.

Thursday will bring the colors of Chloé, Paco Rabanne, Rick Owens, Off / White and Isabel Marant. Friday opens in the sign of Loewe and closes in that of Celine with the second woman show of the Hedi Slimane era. Watanabe opens the day on Saturday, which continues with Ackermann, Westwood, Comme des Garçons and Hermès.

On Sunday, Balenciaga, Valentino and Givenchy in the evening. Monday will be the turn of Stella McCartney and Sacai, Giambattista Valli and Alexander McQueen.

And finally on Tuesday the spotlight will be on Chanel, which will be followed by Miu Miu, Lacoste, the Japanese Cyclas that integrates the schedule of the big and, as a grand finale, Louis Vuitton.

This year the Federation has included in its official calendar 14 maison in addition to the two mentioned Rokh and Cyclas, of different nationalities, thus confirming the image of Paris as an international crossroads of fashion.
Among these, the Italian Unravel Project, by Ben Taverniti and Joyce Bonelli, make-up artist of the Kardashian-Jenner clan, who had already presented a disruptive collection in Paris in September.