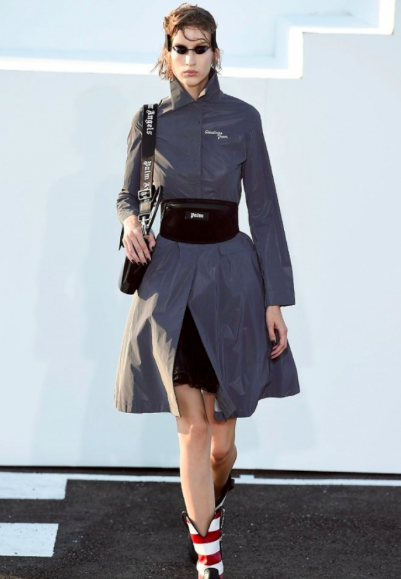 He does not like clean colors or stringent definitions. Francesco Ragazzi moves between white and black,  on the border between two color worlds. And if he decides to mix them a bit, he simply chooses one and goes ahead with that

It would be useless to put it into a specific category. Artistic director of Moncler and founder of the streetwear brand Palm Angels, two different souls coexist in him, never really merging with each other.

The birth of Palm Angels

A soul is the one that has as its symbols the palms and golden sands of California, the other is the Italian one. Together they sculpt the personality of Palm Angels, the brand born in 2015 from a photographic project by the same Ragazzi. In just three years, he became one of the leading brands of American rappers, beloved by A $ AP Rocky, Playboi Carti, Offset, Travis Scott and Pharrell Williams.

Just the latter wrote the preface of the book of the same name from which the idea of ​​Palm Angels started: a 2014 publication that contains photographs taken by some skaters during a stay in Los Angeles. “Before arriving in California – tells Ragazzi – I had a certain idea of ​​L.A. I imagined the palms, the blinding light and the skaters whizzing along the Venice Beach promenade. And so it was. I started taking some pictures and only later did I get the idea of ​​making a book. At Pharrell Williams, with whom I had already become friends in Moncler, I asked to write the preface. His words were able to translate perfectly the spirit of the book and my intentions in making it. Being a skater himself, he knows how true a religion is. There is something in the way they deal with life and in relating to people that fascinate me a lot. ”

In 2015 the first Palm Angels collection was launched in Paris: a unisex line of t-shirts, sweatshirts, cardigans and backpacks animated by palm trees, leaves of marijuana (“the smell of marijuana permeates the streets in Los Angeles”) and some shots taken from the book. With that first collection, Ragazzi gave a concrete and tangible form to the clash between cultures that had forged his aesthetic imagery: «In Milan I attended the American school and immediately I had to deal with a different world from mine. As an Italian who studies the culture and history of another country, I began to develop a sense of estrangement that led me to feel like an outsider wherever I was, in Italy as in America. Then I realized that this feeling could be turned into an opportunity and I translated it into Palm Angels. My collections look at the US and American subcultures through the lenses of an Italian “.

The symbiosis with the music

If the universe of the Los Angeles skaters started the project, it is the music that feeds it every day. «When I have to create a new drawing collection with the idea of ​​ending up in a video or a concert. Music is a passion but above all an inspiration: it is very important for me that my clothes are worn by musicians. The first to do so was A $ AP Rocky and from then on it was a crescendo. My tracksuits are definitely the most loved head by rappers ».

To play them is also Playboi Carti. In addition to running for the brand in January 2018, she recently signed the “Die Punk” capsule collection for Palm Angels, composed of denim garments, sweatshirts and track pants. A collaboration born spontaneously after Playboi Carti contacted the brand on Instagram. “With the world of music there is a mutual attraction but it is not just the rap and the hip hop that I address. In March, for example, I edited the looks and the staging of the Swedish House Mafia reunion concert at the Ultra Music Festival in Miami. Hence the inspiration for my latest S / S 2019 collection, which enriches the style of Palm Angels with rave quotes ».

Inspired by the clubbing scene is also the capsule created for Moncler’s Genius project, which has asked six international creatives – including Pierpaolo Piccioli, Simone Rocha and Craig Green – to rewrite the brand’s identity. Characterized by a nocturnal and futuristic flair, the collection mixes street garments like the track pants – on which stand phrases like “I’m so high” and “Make it rain” – to the reinterpretations of the brand’s historical duvet. Luxury and streetwear meet: once again, two distant worlds that Francesco Ragazzi has been able to bring closer.

Damir Doma: the story of a designer who has done himself

Tom Ford mourns the passing of his husband Richard Buckley