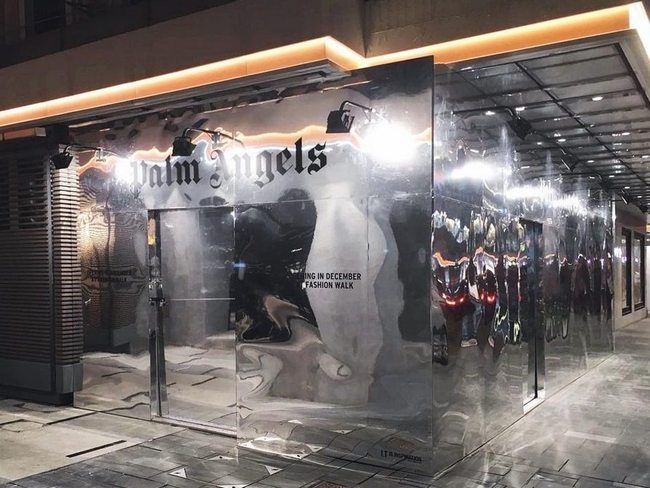 “It is a space of 75 square meters”, indicates the fashion company, confirming the announcement given by the designer on his Instagram profile.

Last June, Palm Angels opened a temporary store in Hong Kong. The young label for men and women had also previously tested pop-up stores in Tokyo in 2017 and in London by Harvey Nichols in 2016. With this first single-brand store, located at 58A of Paterson Street, in the Causeway Bay neighborhood (just a few away from the first Off-White flagship store in Hong Kong), Palm Angels takes a very important step in its development.

The brand has doubled the number of its dealers in the world in a few seasons, and its main markets are Asia, Europe and the United States.

Palm Angels has now reached 300 multi-brand customers, including Barney’s New York, Maxfield, The Webster Miami, Selfridges, Saks Fifth Avenue and Harvey Nichols London, to which is added an endless number of celebrities, in particular the hip-hop and American rap, like A $ AP Rocky, Playboi Carti, Offset, Travis Scott or Pharrell Williams, whom Francesco Ragazzi met during his time at Moncler and who accompanied him in the launch of his brand.

The adventure began in 2014 with the publication of the book Palm Angels, with a preface by Pharrell Williams, where Francesco Ragazzi, who debuted as a photographer, took pictures of the universe of American skaters, capturing the atmosphere of California and its golden light.

From that experience the idea of ​​the brand was born, created in 2015 with the shareholders of New Guards Group, an Italian holding founded in Milan by Claudio Antonioli, Davide De Giglio and Marcelo Burlon, which also includes the Off-White brands , Marcelo Burlon County of Milan, Heron Preston, Unravel Project, Alanui and A_plan_application.

Subsequently, Palm Angels, which has been on the Milan catwalks since 2017, has evolved.

The brand (recognizable by its logo in hyper gothic characters on clothes, as well as for the motif of cannabis leaves recurrently repeated) makes in particular t-shirts, sweaters and suits, proposing the cool and carefree Californian attitude through the Italian vision of the eclectic 80-year-old eclectic designer who splits between Milan and Los Angeles.

After basketball and the world of skaters, even music has come to play an important role in the inspiration of Francesco Ragazzi, who also benefits from all the good networks of knowledge and intermediaries activated at the time of Moncler, with whom .

Thus, its brand Palm Angels has recently made a collaboration with the famous brand of duvets as part of its new project “Genius”, for which Moncler has used eight designers from different backgrounds.

Rejuvenating Formalwear at No.21