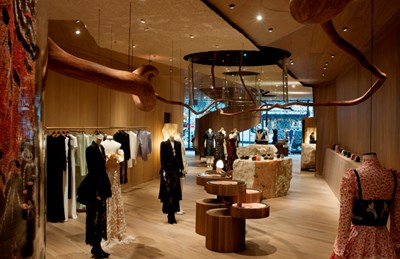 Spread over three levels covering an area of ​​over 1,000 square meters, the store was inaugurated in Bond street and represents the first of a series of openings that will lead to 128 boutiques

Alexander McQueen is the last of the new Bond street tenants. After Stella McCartney, Cartier, Givenchy and Pomellato, the British fashion house inaugurated, on the occasion of the London fashion week men’s weekend, a flagship of over 1,020 square meters on the famous street in the heart of the capital.

Located in the former space of Dkny, the boutique extends over three floors and is four times larger than the previous one, characterized by very high ceilings, honey-colored sculptures and boulders that act as exhibitors and walls covered in oak and walnut.

The interiors were designed in collaboration with the architect Smiljan Radic, while the Chilean artist Marcela Correa has created sculptures in alabaster, bronze, granite and wood, which are designed to guide customers in space.

Every season, the atmosphere will be transformed through the use of new fabrics in the dressing rooms and throughout the sales area, referring to the collections.

The opening represents the beginning of a new chapter for the brand, led by creative director Sarah Burton after the founder’s death, which plans to double its sales network to complete the opening of 128 stores in the medium term, according to declared by the CEO Emmanuel Gintzburger.

Virgil Abloh arrives in Milan with his global streetwear manifesto