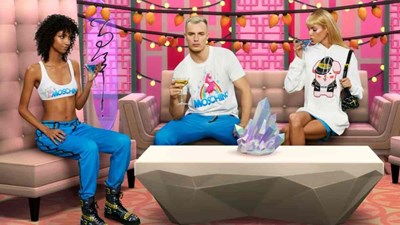 Moschino launches a collaboration with The Sims for a capsule collection that will be unveiled at the Palm Springs Desert Party.

The articles feature pixelated designs and classic The Sims motifs, including the Freezer bunny and the emblematic green plumbob of the video game, the diamond-shaped icon suspended on the head of each sim, indicating their mood.

The launch of the capsule, scheduled at the Palm Springs Desert Party by Moschino creative director Jeremy Scott, will be accompanied by the release of a virtual version of the Freezer Bunny sweatshirt in all current The Sims titles, including The Sims 4, The Sims Mobile and The Sims FreePlay. Further additions related to the collection will be announced during the year.

“I like the idea of being able to imagine, design and give life to a world of characters with the Sims universe,” said Jeremy Scott.

The Moschino x The Sims capsule collection will be available in the maison’s boutiques around the world starting Saturday, April 13th.
Launched for the first time in February 2000, The Sims franchise will soon celebrate its 20th anniversary, boasting a wide spread from the PC to most major console platforms, as well as iOS and Android.