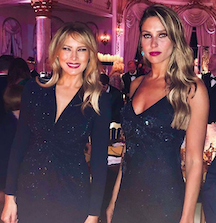 Unveiling it is the Instagram account of the wife of Ambassador Paolo Zampolli, who posted a shot of New Year’s Eve. The first lady opted for a long-sleeved dress and a glittery black V-neck. This is the Joy Hot Fix model. “A classic, pure and simple dress”.

This is the way in which the creation is cataloged in the sales platforms, from the original 3,600 euros, can be purchased at the time reduced by 1,440 euros, ie with a discount of 60%. Zampolli’s wife, who has always opted for total black, is also very elegant.

Melania Trump is one of the most elegant women on the planet. There are those who believe that it is an advantage, having been a model in the past. It is hard to deny that her career as a model has not addressed her positively, but at the same time we are aware that behind her every look there is one or more stylists, who work constantly and with dedication to make every first lady outfit impeccable.

Among her favorite stylists there is no shortage of Italians, like Dolce and Gabbana, of whom she often wears creations.

The last one only a few weeks ago. Even in the latter case the color chosen was black, but it should be emphasized that the first lady also loves the bright colors.

Trump’s was a lonely New Year’s Eve. Because of the shutdown, the president canceled his year-end holidays at his residence in Mar-a-Lago and remained barricaded in the White House by continuing to tweet. “I’m in the Oval office. Democrats, come back from vacation now and give us the necessary votes for security at the border, including the Wall. You voted yes’ in 2006 and in 3013 (an error, refers to 2013, ed).

Another yes “, urges the president, promising that with him the wall” will be built and quickly “.