The minimalist gown features an open bateau neckline, slim three-quarter sleeves and a flowing train cushioned by an underskirt in triple silk organza

Meghan Markle walked down the aisle this morning at St George’s Chapel at Windsor Castle wearing a Givenchy haute couture dress designed by Clare Waight Keller, accompanied by a five-metre long veil and a tiara over a loose bun.

Meanwhile, Prince Harry and best man Prince William both wore the frockcoat uniform of the Blues and Royals, after the Queen gave Harry permission to get married in his uniform. Both were tailored at Dege & Skinner on Savile Row.

The palace has revealed that Markle’s wedding ring, made from Welsh gold, is a gift from the Queen, while Harry’s is platinum.

According to the palace, Markle met the British designer in early 2018 and “chose to work with her for her timeless and elegant aesthetic, impeccable tailoring and relaxed demeanour.”

She was also impressed by Waight Keller, who has served as the creative head of “three globally influential fashion houses — Pringle of Scotland, Chloé, and now, Givenchy” 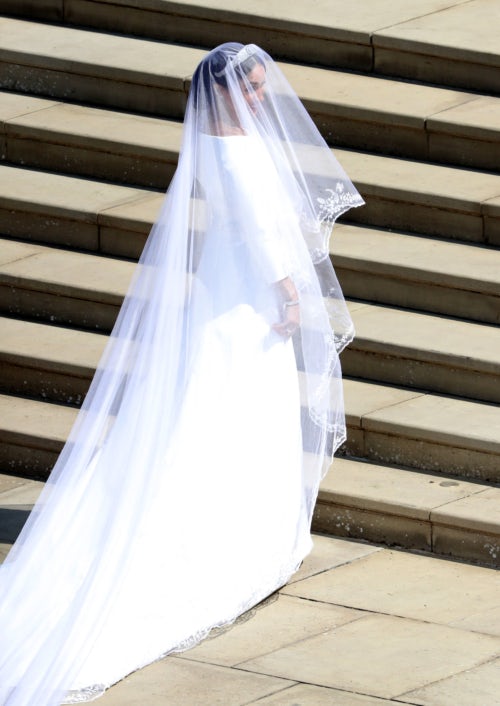 “We wanted to create a timeless piece that would emphasise the iconic codes of Givenchy throughout its history, as well as convey modernity through sleek lines and sharp cuts,” said Waight Keller in a statement.

“In contrast, the delicate floral beauty of the veil was a vision Meghan and I shared, a special gesture embracing the commonwealth flora, ascending the circumference of the silk tulle.”

“It is truly an honour to have been given the opportunity to closely collaborate with Meghan Markle on such a remarkable occasion,” the designer continued. “The House of Givenchy joins me in wishing her and Prince Harry every wish of happiness in their future.”

Speculation around who would design Markle’s dress has been rife.

London couture label Ralph & Russo was the frontrunner to design the wedding gown, having created Markle’s engagement outfit — a black ruffled maxi skirt and sheer, gold-embroidered bodysuit — for her official photo with Prince Harry last December. Headed up by Tamara Ralph and Michael Russo, the brand is known for its elaborate couture gowns, having dressed everyone from Angelina Jolie to Gwyneth Paltrow.

Erdem Moralioglu was also a contender. The designer, who is Canadian — viewed as an asset since Markle lived in Toronto while she filmed the TV series “Suits” and she has also been wearing his designs for years, according to an interview in Vanity Fair — has become a stalwart of London Fashion Week, famous for his softly sweeping dresses and floral prints.

Other names that made the rounds included Burberry, Alexander McQueen, Roland Mouret, Jenny Packham and Stella McCartney, but the selection of Waight Keller was perhaps fashion’s best kept secret as her name did not emerge as one of the contenders.

This is a wedding unlike any the British royal family has seen before. While Catherine, Duchess of Cambridge, was the first commoner to wed a royal in 450 years, Markle, whose official title is now Her Royal Highness The Duchess of Sussex, marks a departure from the traditional royal bride in both race and nationality: not only is she older than Harry and a high-profile actress, she is American and biracial.

The dress by Waight Keller suggests a return to classic elegance for Givenchy, which has embraced hip-hop and celebrity culture under the leadership of former creative director Riccardo Tisci.

Waight Keller, in contrast, is known for her calm and affable manner as well as an interest in the arts.

Sneaker mon amour, in Europe they all agree