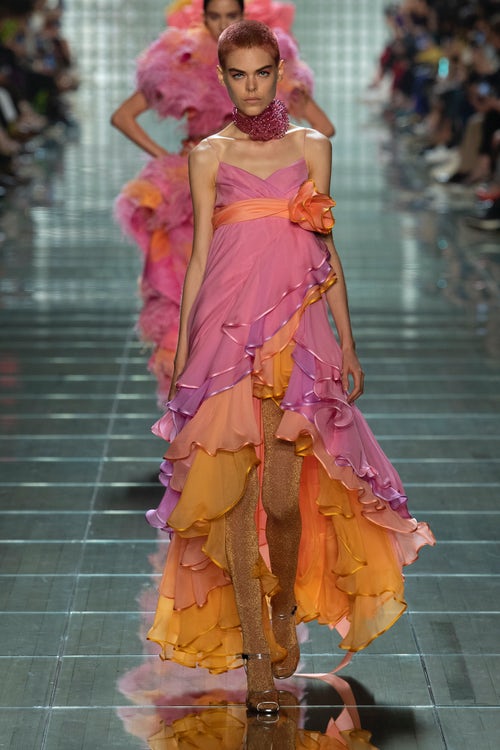 Collections like these can be a challenge for those trying to commercialise his ideas. But, at least, he’s still dreaming

Marc Jacobs started an hour-and-a-half late. Important people walked out, some because they had to catch an overnight flight to London, others because they had to catch a cab to Rihanna, who was showing her Fenty lingerie collection in Brooklyn. The rumour going around was that the clothes weren’t even delivered to the Park Avenue Armory until after the show was already meant to start.

The incident recalled the Great Wait of 2007, when Jacobs was tardy by two hours. Fashion critic Suzy Menkes famously wrote: “Iwould like to murder him with my bare hands and never see another Marc Jacobs show in my entire life”.

To be honest, tonight wasn’t that bad. The Park Avenue Armory was climate-controlled, and there was wifi, and Twitter. The time went by remarkably quickly. What the lapse did do, however, is take air out of the show itself. Would it have felt more magnificent if it had started an hour earlier? Perhaps.

Jacobs did not grant any interviews afterward, and as usual there were no show notes. A publicist said that the designer may end up posting some thoughts on social media. Until then, one must discern what one can by thinking back to previous collections, and to a Genieve Figgis painting he referenced on Instagram just three days ago. He said it made him feel happy.

Figgis’work, often described as macabre, depicts 18th-century aristocrats looking more grotesque than refined. But her subjects are often smiling, even when thereâ€™s blood dripping from their mouths.

The set, once again, was spare, although not so spare as it was in recent seasons when times at the company turned lean. Instead of bare, rickety plywood, the floor was lacquered, anchored by a curved, gridded panel. What emerged from it was a panoply of things that burst: giant silk georgette rosettes tied at the hip, 3-D crystal chokers, rippling layers of curly metallicÂ lacejutting out from the collar of a dress.

Call it Joan Crawford glamour, call it madness, it hit you hard look after look, a â€œkapow!â€ of tiered feathers, satin trousers and sparkly tights. Campy, yes, but then heâ€™d sneak in an oatmeal-coloured henley, or a thin ribbed tank, to remind us that it was 2018.

Whatâ€™s it all for, though? Revisiting old collections, Jacobs used to design ready-to-wear that was, well, ready to wear. Now, heâ€™s in a fantasy land, one that is fun to visit, but perhaps not-so-fun for staying a while. It can be a challenge for those trying to commercialise his ideas. But at least heâ€™s still dreaming.