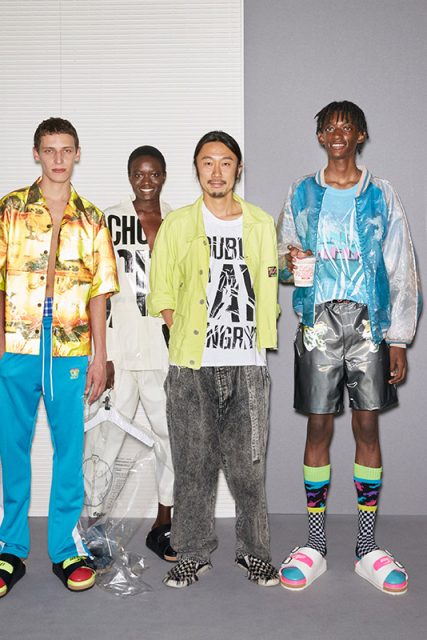 Doublet, a streetwear brand created by Masayuki Ino, won the 2018 edition of the LVMH Prize for Young Designers: to announce the victory, during an event at the Fondation Louis Vuitton in Paris, the actress Emma Stone

To decree the victory of the designer of Doublet a jury of the highest level, chaired by Delphine Arnault, and which included 48 experts including the pieces from Novanta of the Lvmh team, from Maria Grazia Chiuri to JW Anderson, up to Clare Waight Keller, just to name a few names.

The designer of Japanese origin, born in 1979 and graduated from the Tokyo Mode Academy, goes a sum of 300 thousand euros, in addition to a year of internship at the labels of the French giant.

Masayuki Ino founded Doublet in 2012 together with Takashi Murakami, debuting on the catwalk with the spring-summer 2013, after collaborating with Mihara Yasuhiro for footwear and accessories, as design chief. His unisex style amalgamates echoes punk and the nineties, in a very personal way and in complete freedom.

The latter label, which belongs to Rok Hwang, was awarded the Special Prize 2018, which consists of 150 thousand euros and a year of tutorship from Lvmh.

Lastly, the three names that distinguished themselves in the Graduates section are worthy of mention: this is Archie M. Alled-Martinez of Central Saint Martins, who will spend a period with Givenchy; Maya Chantout of the Ecole de la Chambre Syndicale de la Couture Parisienne who will go to Céline; and finally Scylia Chevaux from the Academy of Costume & Fashion, which will be combined with Louis Vuitton.

The latest Doublet collection? It’s in our SHOP! CLICK HERE to see it !