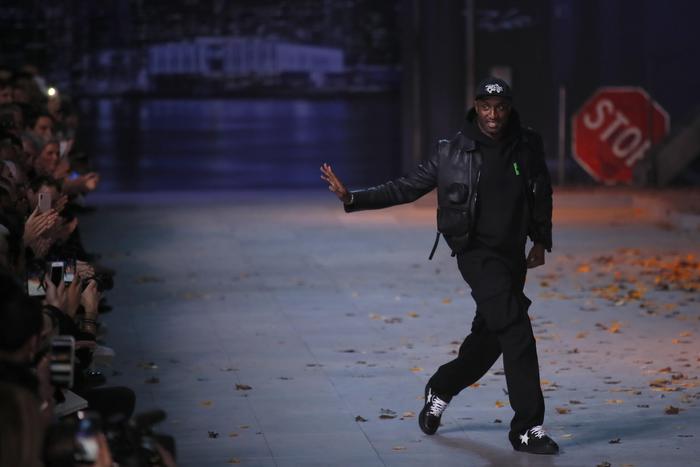 In the Jardin de Tuileries in the shadow of Billie Jean

What if the image of the King of Pop, Michael Jackson, dialogues with the Monogram, the iconic motif of Louis Vuitton, and with all those symbols of Paris? A new (and free) interpretation of ideas about fashion is born and how the wardrobe of a man, made up of familiar pieces, can become truly extraordinary.

A wardrobe of pieces common to all, but at the same time special. It is the style vocabulary of modern man according to Virgil Abloh, at his second show as artistic director of the menswear line of Louis Vuitton. In a special setting in the Jardin de Tuileries, Abloh invites his guests to reflect on the figure of Michael Jackson: the invitation to the parade is a reproduction of the famous white glove covered with sequins worn by King of Pop, the one with whom he exhibited in Billie Jean in 1983, to be clear.

The set elevates the show to a Broadway performance: we are in New York, the catwalk remembers the streets of the Big Apple, with installations (also live) of graffiti artists Jim Joe, Levy Btm, Futura.

The music is played live by Devonte Hynes known as Blood Orange, with Mikey Feedom on vocals, Hart on bass, Jason Arce on saxophone. Everything reminds Billie Jean.

So Abloh invites you to reflect on the figure of Michael Jackson, boy, man, artist, performer, international icon.

He invites one to imagine a boy born in the 50s, raised in Indiana, at 15 he became the most universally recognized symbol of unity on the planet.

His art has existed on a level attainable by everyone, drawn on elements familiar to anyone. His only initial privilege was his talent: a superhuman ability to elevate everyday life by giving new meaning to every element.

Through its ingenious point of view, an ordinary wardrobe made up of familiar pieces has become completely extraordinary: each jacket, glove, sock and hat, a special piece.

Here on the catwalk are the sparkling and shimmering touches on the garments, which are so reminiscent of those worn by the King of Pop. Without forgetting the gloves: already proposed by Abloh in the summer 2019 line (in bright colors) now they are a tribute to Jackson, but also the style detail in more for the modern man.

There are also details inspired by the mountains, chosen not only because the winter collections are logically used here, but as a universal metaphor of dreams and ambitions according to Abloh. Here is the use of the check pattern.

Not only that, Abloh also celebrates Paris, the home of Louis Vuitton, and includes historical motifs linked to the symbols of the French capital. But here is also the pajamas, head from home, now exalted for its comfort.

Without forgetting the concept of inclusiveness, represented by the flags of the world, all united in a collage on the same head (shirt, foulard and trench).

And in Milan instead it was the day of launch of the new concept in the pop-up store of Louis Vuitton at the Rinascente in Piazza Duomo, with the men’s spring-summer 2019 collection.

Everything revolves around the colors, the rainbow pays homage to the film Wizard of Oz. On the walls also the new Monogram Rainbow and a print inspired by the world of Dorothy.