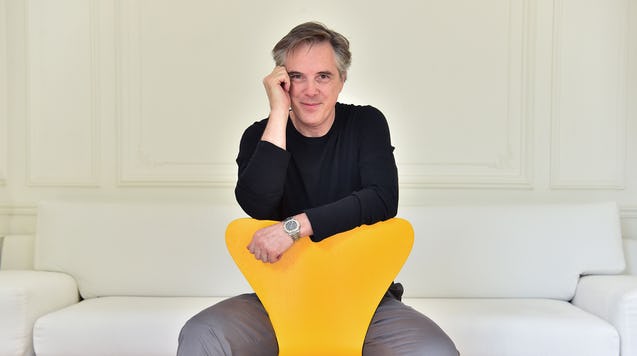 Lanvin is parting ways with artistic director Olivier Lapidus, less than a year after his appointment.

The in-house design team will be responsible for the women’s collection until his replacement is found.

The news follows the acquisition of a majority stake in the troubled French fashion house by Chinese conglomerate Fosun Group last month.

Lanvin has announced additional leadership changes: Joann Cheng, president of Fosun Fashion Group and chairman of the Lanvin board of directors, will become the interim chief executive of the house.

Nicolas Druz, who has served as Lanvin general manager since 2017, will take up the new position of managing director of Fosun Fashion Group to “support the group’s current and future business expansion in Europe.”

“Olivier steered the Maison through a transitional period between ownerships,” said Cheng in a statement. “We thank him for that and wish him every success for his own brand and future endeavours.”

“We sincerely thank Mr Druz and Mr Lapidus for their contributions to Lanvin’s glorious heritage,” she continued.

“In seeking candidates for the permanent positions of CEO and artistic director, we want to ensure we find people who share the spirit of Lanvin.

The re-launch of Lanvin with fresh talents, while adhering to the values that the brand has maintained since 1889, is fundamental to returning the maison to its rightful position at the top table of the world’s most lauded and innovative fashion houses.”

Last month, Fosun completed a deal to become the majority shareholder in Lanvin, which was previously owned by Taiwan-based business mogul Shaw-Lan Wang.

(Wang, who became the brand’s controlling shareholder in 2001, owned 75 percent of the business, while Swiss businessman Ralph Bartel owned the remaining 25 percent).

While terms of the transaction were not disclosed, it was reported the Chinese group would invest around €100 million, with Wang retaining a minority stake alongside Bartel.

The acquisition provided a much-needed injection of cash for the company, which has been struggling financially as a result of slumping sales following Alber Elbaz‘s surprise sacking in 2015 and upheaval at the house.

In 2016, Lanvin’s revenues were just €162 million, a 23 percent dive from a year earlier and its first loss in more than a decade (2017 revenues were even lower, according to sources).

In November 2017, Reuters reported that Wang would inject fresh funds into the brand, with sources reporting that without recapitalisation the brand would struggle to pay employee salaries.

Elbaz was initially succeeded by Bouchra Jarrar. However, Jarrar exited the company after just 16 months in the role. One week after her departure, Lapidus was appointed her successor.

“Lanvin is a truly iconic and storied brand with immense potential,” said Cheng.

“By being a part of the Fosun Fashion Group, Lanvin’s future growth can leverage resources from the expansive global platform of Fosun’s established companies and experts.”

The Miley Cyrus collection with Converse