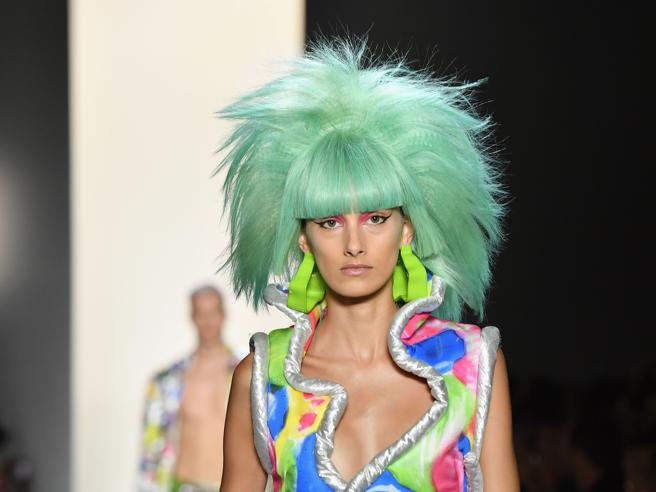 Jeremy Scott: feminism and eccentricity with lacquer and Swarovski crystals

American designer Jeremy Scott has brought to the stage in New York a collection inspired by the eccentric looks of Panem inhabitants of the Hunger Games saga: on the platform models with voluminous wigs and broods with bangs, from green to pink to blue, remembering the nostalgic 80s and the unforgettable Cher, when in the Farewell Tour he sang Bang Bang in the version revisited by Sonny Bono.

In the sartorial codes and couture structures, the echoes of the Moschino archive, of which Scott is creative director, blend with other suggestions in mini dresses with voluminous sleeves, lace corsets and short fringed tops, on miniskirts that are tinged with bright lythe colors, or in leopard-print suits and reptile-print trouser suits. 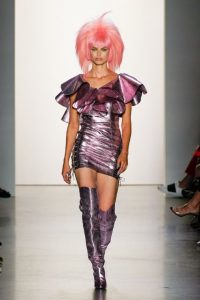 Scott’s imaginative world is in pieces where silver tubes, twisted like snakes, become borders for a daring blazer dress, but also in panties-patchwork of various colors with irregular holes, in a seductive version of the marsina and in the fetish-erotic tricot. 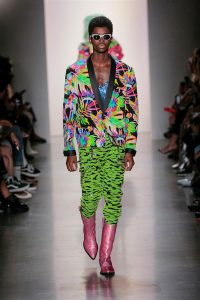 Space for the sparkle of fabrics and 30,000 Swarovski crystals, set as sexy-glam décor on almost the entire collection. Among the accessories stand out, ironic and desecrated as the rest of the proposals, the cuissard and metallic trunks, a tribute to the glam metal and hard rock of Pizzazz, Roxy, Stormer and Jetta of The Misfits, the female group protagonist of a cartoon of the 80s.

To applaud these legendary – and even forgotten – heroines were supermodels Gigi Hadid and Irina Shayk, singer Kehlani, DJ Mia Moretti and friends of the designer like tops Coco Rocha and Heidi Klum with new husband Tom Kaulitz, obviously all dressed Jeremy Scott.

AMBUSH Sets Its SS20 Collection in a Futuristic Neon Daze