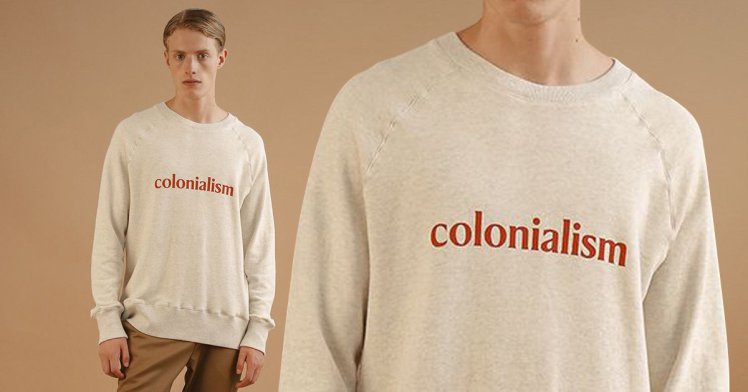 The italian label describes its new ‘Colonial Deal’ range as a ‘short and intense journey in the West [sic] former colonies in order to understand the Colonialism style’.

It even goes so far as saying that ‘[some of] the linen is rough like the faces consumed by the sun’.

So, you can imagine that not everyone’s happy about the range.

After all, it’s pretty odd to want to pay homage to a period of constant raping and savaging of other lands…let alone actually referring to sun-roughened skin as a novelty.

This brand, founded in 2014, defines itself as being based on a ‘strong identity’ that ‘tells the story of metropolitan lives and travels around the world, where inspiration is then found in every collection’.

Mireille Harper has launched a petition demanding the line be binned – and she’s already got 600 signatures.

Founders, Sabino Lebba and Riccardo Moroni both have failed to understand how important the concept of identity is, judging by their latest collection, which depicts male models wearing items of clothing emblazoned with “Colonialism”, amongst other items in the ‘Colonial Deal’ collection,’ says Mireille.

Both fashion designers seem blatantly unaware of the continuing legacy of racism, oppression and poverty which colonialism has created.

“Whether their views are misguided or downright racist, I cannot argue, however they appear to have a complete lack of understanding for people of colour who continue to live with the intergenerational trauma that lingers today in all pockets of society, particularly in their own country of origin, Italy, where racism, prejudice and discriminatory behaviour continues, with the most recent migrant shooting in Maceratabeing a stark reminder of this”

She says that when quizzed over the insensitive nature of the collection, the brand responded by simply asking customers to ‘think about it’ and said that their collection was a ‘post-modern approach to addressing words as “signified and signifiers”‘.

Mireille says: “Despite this, neither them nor their clothing or brand appears to undertake any activity to combat racism, prejudice or discrimination. This clothing appears to be a publicity tool”’