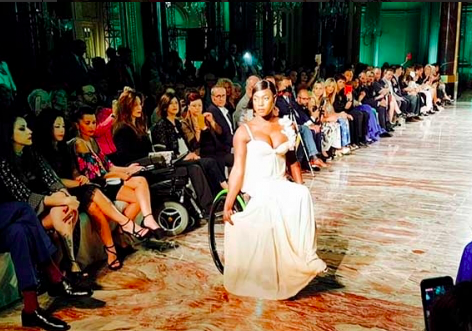 From Hilfiger to McCartney and Balestra the wheelchair couture. The first agency is italian

The first, according to the news, was Danielle Sheypuk at the Fashion Week in New York 2014. In a very blonde carriage, she parked for Carrie Hammer with her skirt printed like a sheet of newspaper.
Almost a quote of an icon of style and glamor as was the Carrie Bradshaw of Sex and the City. For her, he said, it was ” the result of a long personal battle ”.

Then, almost like a domino, there was Tokyo, Paris, London, Milan, Rome. And today an ideal book could not not count Wendy Crawford, beautiful, beautiful, who on the catwalk also came back “after”. Or Sophie Morgan, ” muse ” for Stella McCartney.

And then Madeline Stuart, Australian, first model on the platform with the down syndrome; Rebekha Marine, who call “the bionic model” for how she shows off her arm prosthesis.

And again, the ebony leather, the Leslie Irby wheelchair top; the queen of swimwear, Shaholly Ayers, first ” amputated ” on the catwalk in New York. Up in Europe, with the new Top that Ukraine’s Alezandra Kutas, the extremely elegant Felina Tiger, which from high fashion passes casually to shots for lingerie collections.

And our Bruna Romano, 26, Brazilian traits, Pugliese character, a look that ” hole ”.

In Fashion, many thought, elite where more than any other field is sought the absolute (presumed) perfection, it can not happen.
But here are the new supermodels of the ” inclusive fashion ”.

Of fashion, that is, breaking barriers and taboos and calls to wear handicapped wearers and wearers on the catwalk.
Italy is a pioneer with the birth of the first international agency of ” inclusive ” models, Iulia Barton, initially started in support of the Vertical Foundation – Onlus involved in raising funds for the treatment of paralysis – and then from 2016 became a real and its own fashion agency.
“We are the first in the world – says founder Giulia Bartoccioni to ANSA – At the beginning it was not easy. Stylists and designers fear that a dress on a wheelchair model does not have the same effect. But they are wrong. Beauty and elegance follow other canons ”.

Today in the stable there are 40 models and models exclusively engaged, all over the world, that parade, travel, pose for photo shoots. Selected with ” hard casting ” and courses of pose and posture, because sitting or standing only the real ” Top ” make it.

Like Bruna Romano, ” our Naomi Campbell ”, says Bartoccioni. She in the wheelchair ended two years ago after a car accident. Then, as in the movies, an agent sees it, suggests it to Iulia Barton and arrives at the Milan Fashion Week. ” It seems crazy, I know – she tells ANSA – but today I feel more beautiful than before. I love fashion, but I’m a little girl for the catwalk. I could never have paraded. In a wheelchair, on the other hand, I have no problems. On the contrary – you make fun of – compared to other colleagues who walk, I do not even suffer from the sore feet ”. The last chance, in June, at the Rome

Inclusive Fashion Night, sponsored by Roma Capitale, supported by Euroma2, charity event where Iulia Barton brought together wearers and stylists with and without handicaps, together on the catwalk, on the days of the Altaroma calendar.

A cultural (and emotional) revolution for the emblazoned world of fashion, but not only.

In the United States it is estimated that there are 53 million Americans with disabilities. In Italy 1 in 6 people has some form of disability. A market until a handful of years ago literally ignored, but instead today claims its rightful place in the Olympus of fashion and trendy. And that excites the appetites of the labels. Tommy Hilfiger was the first great designer to sign a line of clothing for children with disability problems and then to announce, a year ago, the debut of Tommy Adaptive capsule collection: over 70 items for men and women with super glamor, but with special strategic details (from velcro to zip) that make them easy to wear. And again, here are brands such as ABL Denim specializing in jeans for wheelchair users.
O Chaimelotte who calls himself ” wheelchair couture ” while the Canadian Alleles launched the trendy accessory for ” dressing ” prosthetics. Until Beyoncé, the queen of pop (and business) who launched her new casual line to its millions of followers in the world in 2016 has hired Jillian Mercado, model affected by muscular dystrophy – to be clear – represented by the same agency of Kate Moss and Gigi Hadid. ” In Italy – continues Bartoccioni – we have worked both at Altaroma and at the Milan Fashion Week, with the Camera della Moda. Florence never ”.
Among the first to pick up the message, the designer Renato Balestra, with his precious evening dresses. ” Lately we work a lot with England and Holland and, of course, the United States – he continues – It is starting in France. Above all, Inclusive Fashion is rapidly taking hold in the East. Our new goal – he adds – is to bring models and models coming from difficult contexts, living in conditions of poverty and marginalization or victims of violence “. And if you think that goodness reigns, go backstage.
To change is only the slew of wheelchairs positioned (and ornate) next to the stands, so that they are coordinated with the clothes, such as shoes and accessories. But the atmosphere is that feverish, crazy, glamorous, demanding and dreamy of every show. Objective? ” That all this becomes normality ”.

From cool girls of the woods to sensual city ladies, Dean and Dan Caten delivered a rich wardrobe incorporating the brand’s most iconic style codes

Tom Ford presses reset on the background of «Babylon Berlin»