Several independent London designers, at various stages of their careers, are fighting to diversify their offerings and broaden their relevance. This Saturday at the city’s fashion week, it was Molly Goddard, Michael Halpern and Gareth Pugh.

The first was Goddard, a quirky, cool girl-about-town whose clothes explore domestic and urban banality in an ironic, nostalgic way. For Spring/Summer 2019, feminine tropes like gingham, daisy prints, and ruffles read anything but Stepford Wife in her able hands, as she distorted and subverted them with transparent or flat, dull textures, playing with egg and a-line silhouettes to either up-end or exaggerate ideas of how a certain garment “should” appear. 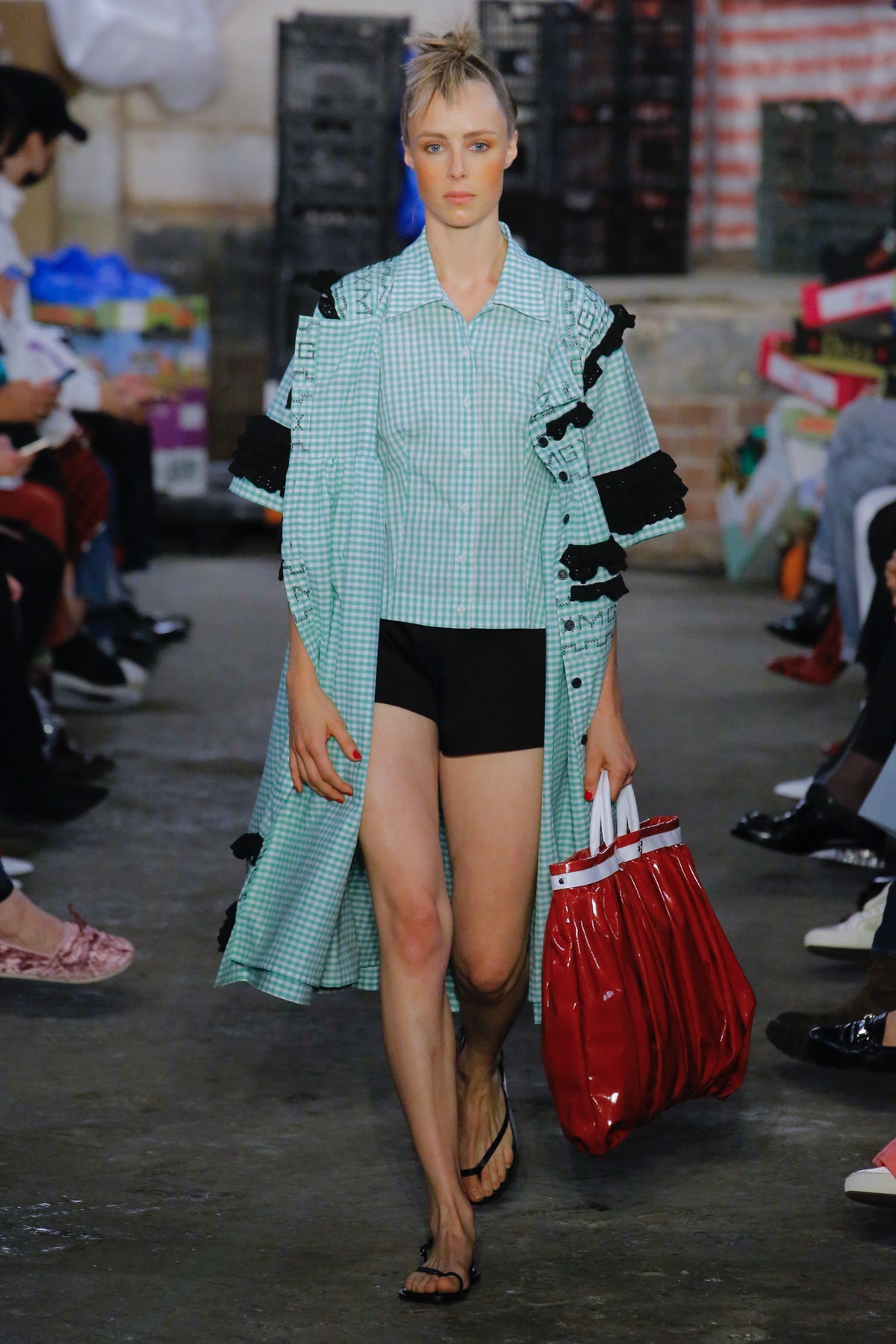 Take her rows of ruffles for example, bifurcating an olive polka dot cha-cha dress, or laid on thick to trim a pencil skirt in flat, dun-coloured cotton. In this way she transformed tank dresses, camisoles, and giant floaty smocks with serious gravitational volume; elsewhere, the interest came as artifice, like scrunchy leather handbags or florid brooches tacked to mesh printed with pressed flowers.

Ever since Goddard made a name for herself with those ballooning monochrome smocked dresses, her quest to diversify has rendered mixed results, but today her ruching translated well into nipped tailoring and shirts.

Next up, Michael Halpern, whose rapid ascent as a budding prince of eveningwear has been led by the demand for his all-over sequinned separates: flared trousers, cocktail dresses and disco blazers — festooned with flames, fireworks, animal prints and the like — that are sure-fire party pieces.

Like Goddard, Halpern’s laser-focused debut makes diversification a rocky road — a balance between satisfying and saturated the demand for what he does best — and this fourth show attempted to dish out his bread-and-butter alongside some new experiments in luxe fabrication to mixed effect. 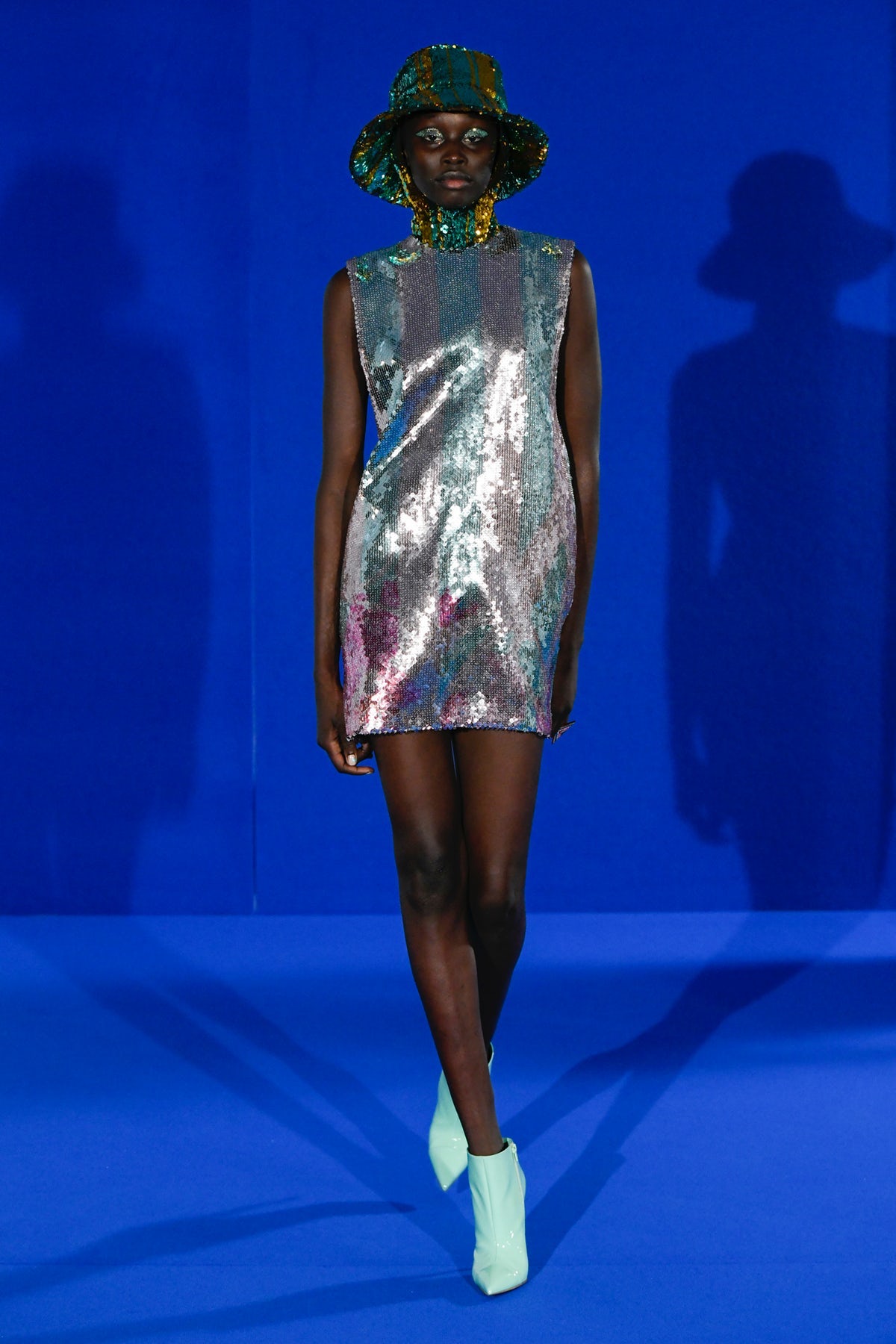 Unfortunately, the molten gold textile he attempted early on tended to droop rather than drape, weighing down his 1960s shapes (the train, in particular) in a way he manages to avoid with his striped and scrunchy sequins. Knotted in a giant bow, another sky-blue dress held better shape, yet its shine read too industrial: like wearing cling film. Despite these hiccoughs, and some misplaced hip slashes (challenging the wearability of certain frocks), Halpern’s timewarp read as fun and flirty, and the curly-heeled Louboutins he co-branded were a perfect match.

Then there was Gareth Pugh, Sunderland’s fashion poster boy whose reverence for Britain’s pagan underbelly has resurfaced in his anarchic collections of late. Against Goddard’s saccharine sweetness and Halpern’s all-out glamour, Pugh’s approach goes to prove how wide fashion’s spectrum is today. Yet where his designs fall on this spectrum with respect to relevance was harder to grasp.

This evening’s show preceded a Voguing Ball: a tribute to the late, great accessories designer Judy Blame, whose recent passing greatly touched Pugh and his comrades. Slinking out in a masked star-spangled bodysuit wielding a fan like a blade, Pugh’s first model set the tone for an ominous ode to nightlife of a different kind, where bleach-splattered bodices and flared raver jeans took centre stage alongside, Klaus Nomi tailoring morphed into snap-crotch bodies. 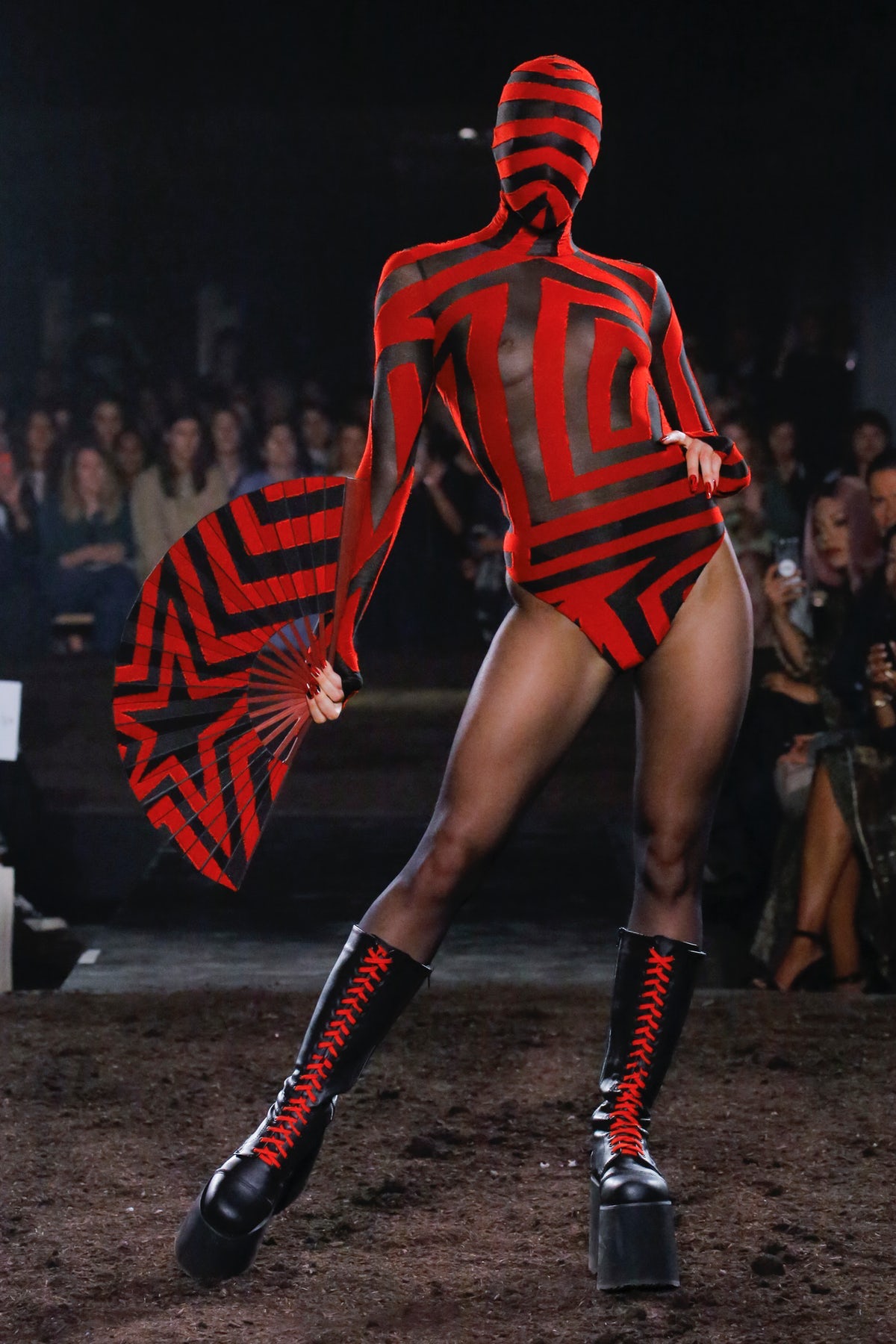 Orange PVC and hot pink metallics were scrunched into armour-like coats and cowled tops, all piled high atop buckled goth boots. His dramatic elegance — bunkered in extreme prose and mythical references — would have done Blame proud. London needs its dreamers, but Pugh begs fashion’s age-old question: is this really what monied women want to wear? Vogue-ing crews aside, the jury’s out