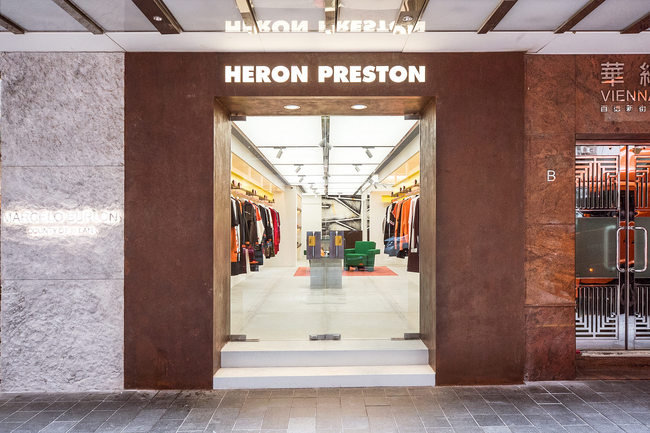 Heron Preston on the trail of Off-White?

Heron Preston accelerates its race, standing out as one of the most avant-garde brands on the border between street, workwear and couture

Launched at the beginning of 2017 by the American designer of the same name and by the New Guards Group (NGG), in two years it has achieved a turnover of 25 million euros, and is distributed through its e-shop and a network of about 200 points of sale multi-brand in the world.

The label, which will enter the calendar of the Paris Men’s Fashion Week next January, has just reached another important milestone with the opening of its very first single-brand boutique. A flagship in Hong Kong, on Paterson Street 55, in the Causeway Bay neighborhood, just a few street numbers from Off-White and Palm Angels stores, two other names appearing in the New Guards Group’s stable.

Another project in progress for Heron Preston is the new collaboration that has just launched with Carhartt WIP (Work In Progress), the European licensee and distributor of one of the US brands of reference for the fashion-streetwear universe.

A return to the roots for the eclectic designer-DJ-artist handyman, who debuted styling the most iconic models of Carhartt WIP jackets on their website.

“I became a fan of Carhartt when I arrived in New York in 2004. I noticed that it was not just the workers who wore it, but that the label transcended cultures. In my opinion, it is one of the first authentic, non-fashioned clothing labels, accepted by street culture (…) and in which I have been identifying myself for almost two decades “, comments Heron Preston in a statement.

The collection of 18 models, available at some retailers and on the e-shop of the brand, is composed of the classic items of workwear, such as T-shirts, waistcoat, jacket with pockets, trousers reinforced at the knees, the baby carrier and the cap decorated with crystals, sold between 249 and 958 dollars. You can find Heron Preston‘s trademarks: camouflage and the predominance of fluorescent orange, while the clothes are all reworked as if they were splashed with paint stains, representing a sign of the work done by the workers.

“Heron is a friend of Virgil Abloh. We liked it, and that’s how the idea of ​​launching Heron Preston, which is owned by NGG, was born. It is one of the fastest growing brands in the group, with Off-White and Palm Angels. We believe a lot in him and his potential, “Claudio Antonioli, one of the leaders and co-founder of the New Guards Group, told FashionNetwork.com.

“Heron Preston offers a street wardrobe, but that does not have the old street volumes. Soon a collaboration with Nike will come out in Paris. With him we are trying to retrace the same trajectory of Off-White, “he says.

In fact, the 35-year-old designer, originally from San Francisco, has now traveled a beautiful path, which is now divided between Milan and New York.

When he arrived in New York at the age of 20, in 2003 he created a series of recycled and screen-printed shirts all by himself, then entered the Parsons School of Design, from which he graduated in 2008 with a diploma in his pocket. Its beginnings in the Big Apple inspire her to publish a book-album of photographs portraying New Yorkers, noticed by Nike, who immediately afterwards assumes it as a digital producer.

He is at the Oregon sports manufacturer who is acquainted with Virgil Abloh, with whom he created the collective label Been Trill alongside other emerging designers. Later, he also became creative director for Kanye West.

In 2016, Heron Preston launches into the world of fashion with the “UNIFORM” collection, born of a collaboration with New York urban cleaning services (DSNY), in which it explores recycling and sustainability processes through the use of a series of recycled garbage cans from New York.

Since then, he has multiplied the collaborations, from NASA to Off-White, without forgetting Nike and precisely Carhartt.