Creative director Virgil Abloh’s hiatus comes at a turning point for his brand, which may need a degree of reinvention when he returns

A crowd of excited Virgil Abloh fans lingered outside the Centre Pompidou in Paris on Thursday night, waiting for something that would never materialise. The designer had promised that there would be some sort of crowd participation at the staging of his Off-White Spring/Summer 2020 womenswear collection. But inside, without the high-concept production that the industry has come to expect of Off-White’s shows, the runway only surprised by featuring minimal visible logos, focusing instead on sharp shirt dresses, cut-out leather pants and leggings with a front slit.

Abloh, as expected, was nowhere to be found. He announced at the beginning of September that he would work from home in Chicago for three months in order to recover from an overwhelming travel schedule, which included eight international flights per week as part of his work at Off-White and Louis Vuitton, where he is the men’s designer. (He also participates in myriad collaborations and is an in-demand DJ.)

For Off-White, Abloh’s temporary disappearance comes at a precarious time for the brand, which may be in need of reinvention when its founder does inevitably return.

In many ways, the retrospective on Abloh’s work in fashion and beyond on view at The Museum of Contemporary Art Chicago this summer felt like the end of a chapter for the designer, who has deftly recognised that fashion has become less about the intricacies of design and more about the significance of images and the way products build communities of like-minded people.

Many are wondering about the future of the brand, and what it might look like in the future with or without Abloh’s involvement. It was the topic of discussion last week in a closed Facebook discussion group called High Fashion Talk, as prompted by Iolo Lewis Edwards, a photographer and founder of the 25,000-member group of passionate fashion fans, many of whom are men.

“They can really benefit from that as a way to ‘refresh’ on their clothing which can be kind of redundant sometimes,” said one member. “Imagine a mass-produced Off-White hitting the middle markets instead, I reckon they could wipe the floor with high street brands,” said another. 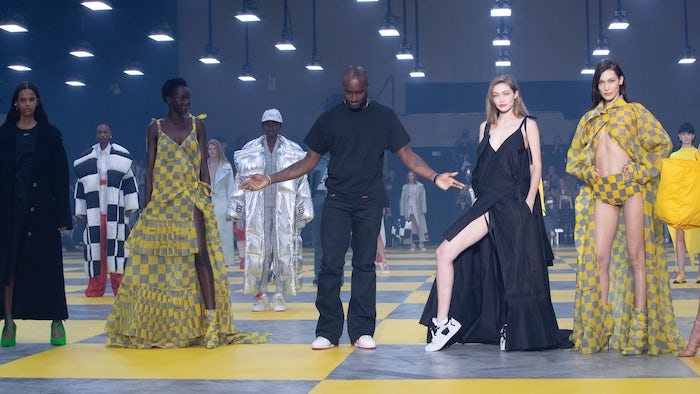 Edwards said that he has seen a shift in recent months in the way that the group’s members regard Off-White, the sought-after luxury streetwear brand and collaboration machine founded by Abloh in 2014. Known for the sort of visual branding, tribal significance and tightly controlled distribution strategy that can turn a simple T-shirt into a coveted signifier of status and affiliation, Abloh pushed high-fashion to think differently about streetwear, limited-edition “drops” and community building. He has since been embraced by the mainstream, with LVMH naming Abloh men’s artistic director of Louis Vuitton in 2018. More recently, Tom Ford appointing Abloh to the board of the CFDA.

But like all that goes up, Abloh’s ascent to the pinnacle of luxury menswear appears to be levelling off — and it’s not just fashion fans on Facebook groups. According to data from retail analytics firm Edited, demand for Off-White products at US retailers is slowing down. The number of sold-out products on Farfetch is down 50 percent year-over-year, and the number of discounted items is up 7 percent. During the sales in July, 40 percent of the brand’s products were discounted, up from 30 percent the same period the prior year. For the year through August, the value of earned media about the brand on social media decreased 38 percent versus the same period a year earlier, according to Tribe Dynamics.

“It seems like the audience has moved over to Louis Vuitton rather than Off-White now,” said Edwards.

Off-White is at a turning point as the luxury streetwear cycle that Abloh helped pioneer starts to cool off. Last week, Balenciaga’s Creative Director Demna Gvasalia stepped down from Vetements, the only luxury streetwear brand to rival Off-White for its high-fashion influence, which has seen a more dramatic tumble in its relevance to both the industry and shoppers.

Abloh has already started to lay the groundwork for a new era at Off-White, pushing the collection in new directions on the runway in recent seasons, including more tailoring and evening wear. But the brand is still primarily known for its core offering of $300 T-shirts and $600 hoodie sweatshirts, as well as accessories and Nike collaboration sneakers, branded with his signature crossing arrows and quotation marks. These pieces are his major differentiators, much more so than the understated but elegant runway pieces which don’t have as clear a reason for existing in the market.

However, Off-White is hardily entering a tailspin. It is consistently at the top of Lyst’s quarterly list of hottest brands (based on Lyst and Google search data, conversion rates and sales and social media), alternating in the top spot with Gucci since the second quarter of 2018.

In the most recent quarter, Off-White’s Jitney bag — a ladylike style with “LOGO” and “CASH INSIDE” printed largely on the outside in Ablohs’ handwriting — topped the Lyst Index of most popular women’s items, and chunky Off-White Odsy 1000 sneakers ranked fifth in men’s products.

Currently, 16 percent of its US wholesale products are marked down, according to Edited, compared with an average of 37 percent for luxury brands.

And the community that Abloh has built around Off-White is still out there, waiting for the next Nike release or showing up to his show venues, motivated to belong as much as to buy. Its what inspires his fans to take in his work in a museum or cue up for his latest collaboration.

Luxury streetwear may have peaked among the jet-set youth, but there are still consumers discovering the brands that defined the trend. The larger societal movement of people dressing more casually, even at work and special events, should also keep the streetwear brands from fading fast. 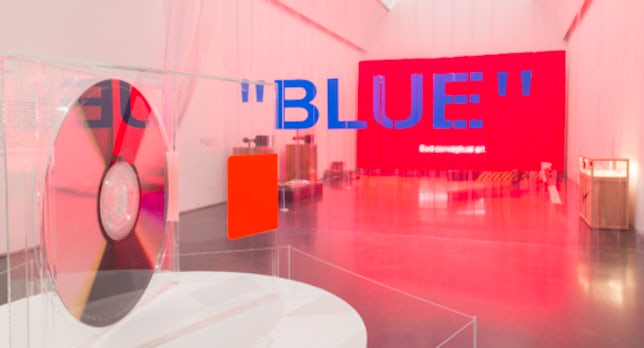 A view of the exhibit, “Virgil Abloh: ‘Figures of Speech,'” at MCA Chicago | Source: Nathan Keay

Many luxury brands have also tapped into streetwear, making Off-White’s core market more competitive, said Mario Ortelli, managing partner of luxury advisory firm Ortelli & Co. But Off-White has a track record of giving customers what they don’t know they want yet, rather than reacting to the zeitgeist, he added.

“Off-White so far has shown great ability to adjust to what our market requests,” Ortelli said.

Meanwhile, however, big changes are coming to Off-White’s retail strategy, which will likely make the brand easier to shop and, as a result, cut into some of the hype it earns by being limited in release. This is particularly important for sneakers, which are seen as more desired based on how few pairs are available for sale. Last year, for example, releases of the coveted Yeezy sneaker did not instantly sell out because Adidas increased the quantities on the market.

The force behind the retail strategy change is Farfetch, which acquired the New Guards Group in August. The Milanese platform controls Off-White and other limited-release brands led by creatives with ardent followings, like Heron Preston and Palm Angels. Farfetch plans to launch, test and scale brands with New Guards through its own sales channels, effectively betting it can cash in on the rise of the next Off-White. The marketplace also plans to increase the volume of direct retail and e-commerce sales of existing brands, which only represents about 5 percent of New Guards Group revenue.

New Guards Group does not actually own Off-White, however, but is the majority owner of a company that licenses the Off-White trademarks, which are owned by Abloh. The earliest the license agreement can be renegotiated or terminated is in 2026, and otherwise it runs until 2035. So these next seven years will be critical for Farfetch. Once that agreement opens up, Abloh will be free to do what he wants with the Off-White brand.

In the meantime, however, it’s clear that Abloh’s became a leader in fashion because he understands better than most that the business today is predicated on much more than innovative design.

Perhaps this self-enforced travel ban is a way for him to find his next approach.

Beyoncé Just Stepped Out in the Prettiest Pastel Balmain Dress

LVMH: Antoine Arnault at the LVMH image and communication guide