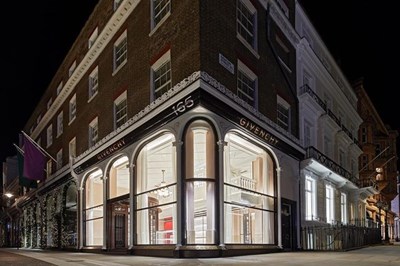 New London flagship for Givenchy. The maison opened at 165 of New Bond street, in an eighteenth century building in the heart of Mayfair, one of its few independent boutiques after those in the European cities of Paris, Nice, Milan, Rome, St. Petersburg and Baku.

Outside the original elements of the building are maintained, while the interiors have been enriched with wall mirrors, tiles and optical forms that frame the fashion house’s spring-summer 2019 collection, led by creative director Clare Waight Keller, illustrating “the multifaceted concept of Givenchy and his sophisticated vision”.

The space is equipped with a so-called Essential room with pink walls where women’s prêt-à-porter, footwear and eveningwear are placed, while the green walls and wooden ceiling define the department dedicated to men’s collections, paying tribute to boxes in which Hubert de Givenchy was in the habit of delivering his haute couture dresses.

New York Fashion week from 14 to 17 of February