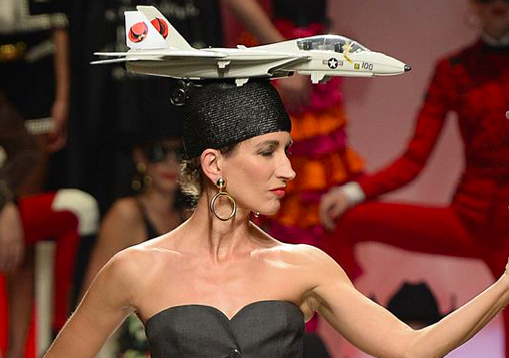 The biography of the most original and playful Italian creative in the world of the international fashion system: Franco Moschino

Franco Moschino reached the peak of Italian fashion by subverting all the rules, from style to advertising, from fashion shows to irony with which he spoke of his own profession. The beginnings as an illustrator, then Versace and Cadette, a historic Italian company in which Moschino refined his stylistic language. His label debuted in 1983 and makes its way to blows of irreverent and unpredictable looks, classic shapes, perfect cuts and seductive details, able to enhance female beauty.

“There is no freedom without chaos – he said – the Moschino concept consists in leaving the total freedom of choice for those who wish to dress”.

“The settings are banned, the one used last year, if you like it, it will be used again this year and the year after”. Franco Moschino died in September 1994. The designer’s staff, led by his closest collaborator, Rossella Jardini, succeeds in the task of safeguarding the inheritance. In the fall of 1999 the Moschino brand was taken over by the Aeffe group and is now entrusted to the creativity of the American designer Jeremy Scott. But how do you become Moschino? To understand it, you have to take a dip in the 80s.

Moschino, biography of the desecrating stylist

Franco Moschino was born in Abbiategrasso on 27 February 1950. He attended the Academy of Fine Arts in Milan to become a painter and, to stay, he worked as a freelance illustrator for magazines such as Linea Italiana and Harper’s Bazaar. The debut in fashion comes in the 70s as a collaborator of Gianni Versace and then of Cadette, one of the first Italian brands to understand the importance of the partnership between stylism and industry.

In 1983 the Moschino Couture was born, a forge of unusual clothes, inspired initially by the creativity of Jean-Paul Gaultier. The fashion of Franco Moschino is a mix of elegant paradoxes, which reveal great technical expertise and insight into the choice of raw materials.

At the base of its collections there are also the protest, the denunciation of the excesses of the fashion system and of the “image society” of the 80s. The taste for provocation leads him to revisit, with an ironic and pop style, part of the repertoire aesthetic of the twentieth century, starting with the suits of Chanel, with pinwheels instead of buttons, skirts made of ties and dresses with the mantra “no stress no dress”.

IF YOU CAN NOT BE ELEGANT, BE AT LEAST EXSTRAVAGANT

To leave the press open-mouthed are, over the years, even jackets with fried eggs on the pockets, top with trompe-l’oeil breast, T-shirt with the inscription “Moschifo” and bullfighter jackets great evening version. “If you can not be elegant – Moschino repeated – be at least extravagant”.

The lines of the Moschino universe

The multiplicity of messages from the label also influences retail expansion, with boutiques that become works of art, especially with their themed, colorful and irreverent display cases. Do not miss the fashion shows (unforgettable catwalks with models on their knees) and advertising campaigns.

In the years of the maximum expansion of his fashion house, Franco Moschino likes to invite journalists to fashion shows with pants turned into save the date and to be photographed dressed as a woman. 1989 is a decisive year for the company, which inaugurates the Milanese boutique in via Sant’Andrea.

In 1990 it was the turn of via Durini, also in Milan, with a sales point for the Cheap and Chic and Moschino Jeans collections. In 1991 Franco Moschino decided to leave the catwalk, the following year confirms his inclusive nature with the launch of the first social awareness campaign.

At the end of 1993, La Permanente in Milan hosts the great X Anni di Kaos retrospective, a journey through the creative anomalies of Moschino, culminating in an exhibition of paintings in which the designer showed to the public, for the first time, his most sincere, that of a man who, in reality, wanted to be a painter.

Franco Moschino died in September 1994, struck down by a cardiac arrest. The staff, led by Rossella Jardini, manages to preserve the continuity of the collections and consolidates their success. In 1999 the brand was taken over by the Aeffe group, to which Moschino had entrusted the production of its lines since the early years. On the horizon there is an international expansion plan.

The relaunch of Moschino by the group led by the Ferretti family began on October 28, 2013 with the choice of the designer Jeremy Scott as new creative director.

Scott’s nomination came just after the fashion show of Milano Moda Donna, during which Rossella Jardini presented a collection of eighty items, as a tribute – and official leave – to the company’s thirty years.

With Jeremy Scott Moschino has embarked on a real pop revolution, immersing himself in the Californian culture.

The bright colors favor the surprise effect of the collections, for a nonconformity faithful to the soul of the founder and a recurring motto: nothing is ever fashionable, nothing is out of fashion.

Oscar for her career in Etro for Lina Wertmuller