After the death of Karl Lagerfeld, Silvia Venturini Fendi added the women’s fashion collection that Lagerfeld oversaw for 54 years to her set of design responsibilities at the house that carries her family name. Today, as she prepares to stage her first women’s ready-to-wear show, Mrs Fendi tells Tim Blanks about what she learned from Lagerfeld and the future of the brand

Since Karl Lagerfeld’s death in February, Silvia Venturini Fendi, creative director of accessories and menswear for the business her grandparents founded in 1925, has taken over the women’s collection that was once Lagerfeld’s domain. The scope of her new responsibilities renders her old title a little banal. What would better suit her expanded role?

Silvia has a very distinctive sense of humour, dry, sly, a little twisted. “It’s very important for me to keep this alive in my work,” she says to BoF. To that end, she likes to launch each new season with a screening for the design team in Fendi’s home cinema. “It’s not just for reference, it’s also a starting point for the emotion of the collection.”

So make what you will of Silvia’s choices for Spring 2020. The first film she screened was “The Anniversary” from 1968. Bette Davis plays the matriarch of a toxic family. “I love the way she treats all her boys,” Silvia says. “She’s an extremely elegant woman, but she’s also the meanest woman in the world, and I want a mean girl on the catwalk.” Davis sports an eyepatch in the movie, which she colour-coordinates to her outfit. “I also love the way she makes a negative into a positive. It makes her style so unique. I asked myself if Madonna was inspired by her eyepatch because she has something in her face where they’re starting to look alike.” 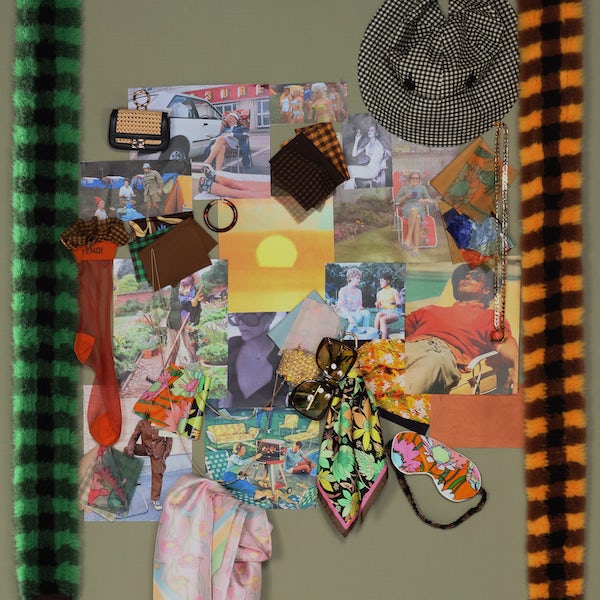 Silvia’s second selection for Film Night with Fendi was even more left-field: “Carry on Camping.” Yes, the very same nudge-nudge-wink-wink romp where, during vigorous morning calisthenics, Barbara Windsor loses her bra but gains celluloid immortality. “I always start with a way of life which I like, especially in the summer, and that’s the outdoors. So camping is basically the starting point of the show.”

Silvia is quite aware that the connotations of camping in a Carry On film range far beyond a plastic pup tent. Expect to see synthetic fabrics versus cottons. Swimwear versus furs. A bit more body-consciousness. “But audacious, rather than sexy.” Silvia insists she wanted to do something completely opposite to her men’s show in June, whose gardening theme shares a superficial outdoors-y connection. She’s showing indoors for one thing. “It’s interesting to bring the outside inside. And this time, it’s more 80s, with a touch of the late 60s.” Mulling over the situation, she decides the crux of the show is “normality versus perversity.”

But maybe that was always the crux of Fendi. Bette Davis and Barbara Windsor are only the tip of an idiosyncratic iceberg. That’s what happens when you have a brand shaped by personalities as different but as curiously compatible as the rigorous Mitteleuropäischer Karl Lagerfeld and the relaxed Roman Silvia Fendi. Her mother and four formidable aunts originally hired Lagerfeld as consultant designer in 1965. He was a fixture in her childhood, but then she turned wild child and ran away to Brazil, where she had two kids and made jewellery on the beach. I think Lagerfeld would have rather relished that unexpected turn of events. Certainly, when she returned to the family fold in the 90s, he and Silvia forged a partnership that has carried Fendi to its current billion-dollar rung on the luxury ladder.

He gave her limits. She liked that. Obviously, she feels more responsibility with him gone, but she keeps her doubts to herself more than she used to. “Before, Karl would decide. He wasn’t around every day, so I had to decide things without him, but he was the first person to judge. I had to hope he would love what I’d done and not tell me to start again.”

And sometimes that was exactly what he’d do. “What I learned from Karl is even from things you don’t like you can find something to start with, something to save, something that could tell you something else,” Silvia says now. “It’s sometimes good to start from something you don’t like. I always look for the fourth dimension in things, the most interesting dimension, when you look at something and then you have to go behind it in a way to make it belong to you.” I’d call that a prescription for the happy accident. She agrees. “That’s where you find the most excitement.”

Now Silvia’s limits have to be self-imposed. “I ask myself very often what Karl would say, but Fendi is a combination of excessiveness and limits, of rigour and freedom, Mitteleuropa and Rome. and even if he is not around, my way of thinking is informed by those juxtapositions. Fendi started with fur, the most primitive material, and opposed it with something very modern and synthetic. That became the aesthetic of the house. The company was built on it. Karl was with Fendi for 54 years, so it doesn’t sound ‘natural’ to refer to ‘the Karl Lagerfeld era.’ Now it’s just the way we all think here.”

“Karl was with Fendi for 54 years, so it doesn’t sound ‘natural’ to refer to ‘the Karl Lagerfeld era.’

That said, I’m still curious about whether Fendi will evolve in a way that people can attribute to Silvia’s sole stewardship. “I would be very interested in knowing how people perceive what I’m doing,” she muses. “I don’t ask myself questions like that, I just keep doing and applying my old rules, the Fendi rules, but also my own rules in taking pleasure in what I do. If you can achieve that, people will understand and take their own pleasure out of it.”

Between following Fendi’s rules and her own, you imagine that there must have been tensions between nature and nurture in Silvia’s life. I wonder what the headstrong girl who ran away as far as she could would make of the woman she’s become. “When I’m here surrounded by all these sketches, fabrics, papers, I’m always dreaming that one day I will escape,” that woman says. “The girl in me still thinks, ‘One day I will go back there.’ But I think that girl would be proud because I didn’t expect [myself] to be as motivated and strong.”

A recent profile on CNN was an emotional reminder of her roots. “When you have to compare yourself with strong women like my mother or my aunts or my grandmother, you think, ‘I’ll never make it.’ But when I saw the CNN story, I thought, ‘Oh my God, I really fit into that story. I made it.’ But I also feel detached from who I am. I always dream about what I would do if I wasn’t here. I never know if I chose this world or if I was born into this world. This is a question in the corner of my mind I always ask myself.”

Take a Walk on the Wild Side, con Jil Sander

The power of Alexander Mc Queen

Vaccarello and YSL in Paris