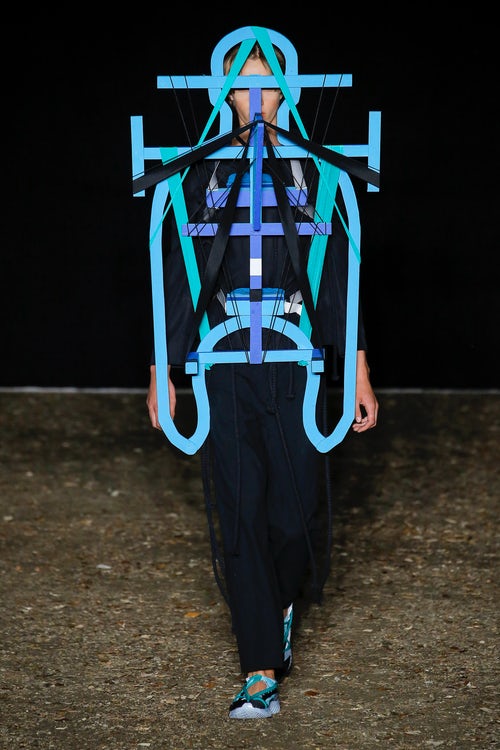 The show was a brilliant introduction to the designer, who continues to encourage speculation about his motives through the way he blends ambiguity and fearlessness.

When Craig Green was offered the headlining spot at Pitti Uomo in Florence, he was tortured. It meant he had to miss the men’s collections in London and, with his show the linchpin of that particular schedule, Green knew the impact his absence would have. That wasn’t ego. It was simple human decency. Green, in other words. He’s a nice guy.

At the same time, his dilemma was eased by the fact that a whole lot of buyers who’d never made it to London would finally get to see a Craig Green show in Florence. Nice guy, but smart as a whip. Like his presentation on Thursday night. Green’s choice of location was counter-intuitive — not something humble and anonymous (his usual choice in London) — but the grandeur of the Medicis’ Boboli Gardens. He wanted to take the opportunity to show outside, something he’s never felt confident enough to do in London.

But then Green opted for a treelined annex in the garden. Outside, yes, but hardly grand, though he hung the space with huge black banners. It was almost as though he was hedging his bets, like he was saying, “I’ll give you THIS much spectacle, and no more.”

Maybe it’s stretching a point to speculate so heartily about the motivations of a designer, but Green encourages speculation because of the way his work blends ambiguity and fearlessness. He closed his show on Thursday with bare-footed penitents dressed in lusciously tie-dyed robes (they looked like huge quilted squares of fabric laced together in Green’s signature style, almost Miyake-like), an image which evoked one of his most emotional collections in its peculiar, naked spirituality.

And it’s true — afterwards, Green was talking of paradise and angels, but in an entirely pragmatic way. He claimed he was inspired by the workwear of cleaners, and also the smocks of surgeons, “people who hold your life in their hands”, he called them. “Modern-day angels, forgotten saviours.” So you could say that the uniform aspect of the collection was down to the most heavenly scrubs in hospital history.

But workwear has always been a foundation of Green’s design ethos, so its dominance here was all part and parcel of the designer consolidating himself for that audience who hadn’t yet encountered him in a live setting. It certainly felt like his show was a brilliant introduction to the world of Craig Green, if you didn’t already know who he was.

It wasn’t just the precision of his uniforms, or the equally signature use of ties and cords (they looked like almost like arteries as they crisscrossed the scrubs). Green’s use of colour reached new heights, in the delicate, almost lingerie-like layering or body-conscious tops. Their extreme sportiness was underscored by a capsule of his first clothing collaboration, with Nike, on a handful of garments made with that Flyknit stuff they usually use for sneakers. And there were the hoodies and parkas that now Green classics, though here they were made more alluring with a futuristic tracery.

It suggested circuitry pulsing beneath the skin, an eerie undertow which tied neatly into the ambiguity that feeds the Green enigma. Some of the models were framed with wooden contraptions, as they have been since the designer’s graduate show at Central St Martins. A few looked like the outlines from crime scenes. Green said he was fascinated by how ten people could see the same thing but report it in a different way. The unreliability of reality, in other words. (Call it the “Rashomon” effect.)

But he said he was equally fascinated by the notion of a halo hovering around us, following us even though we’re not aware. Aficionados of the horror movie “It Follows” will instantly relate. Green loves horror movies. Maybe you wouldn’t count “The Shape of Water” as one, but there was an eldritch echo of it in the fabric that fluttered amphibiously down the spines of his tops and the seams of his trousers, blurring definition. Redefining reality, in fact.

Green said the scariest thing to him was reality. “The best thing is the unknown.” He called his work a portal, a doorway. Maybe that’s its ultimate power. Open the door and step into somewhere else, something quite eerie in its aftereffect. The only other person in fashion who’s achieving anything remotely close is Alessandro Michele. 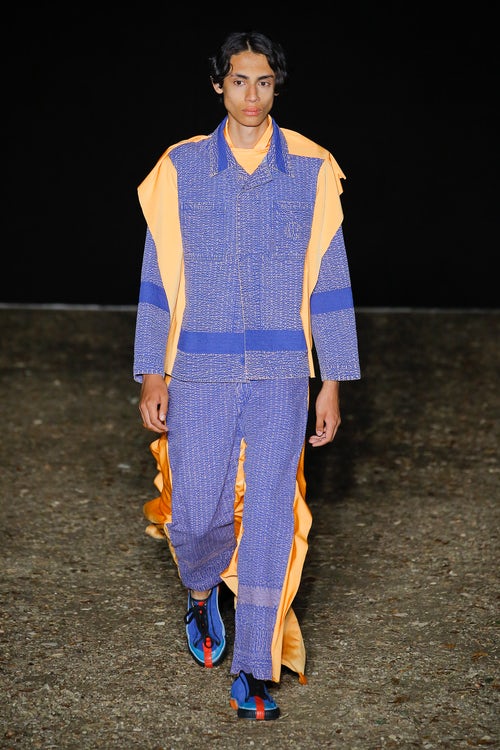 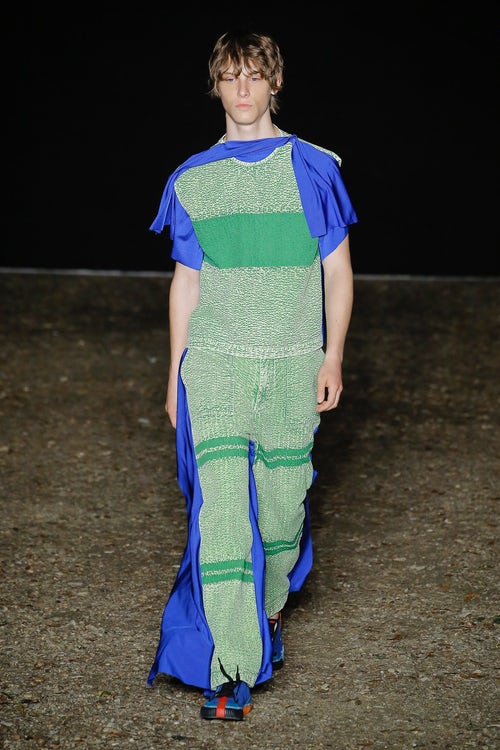 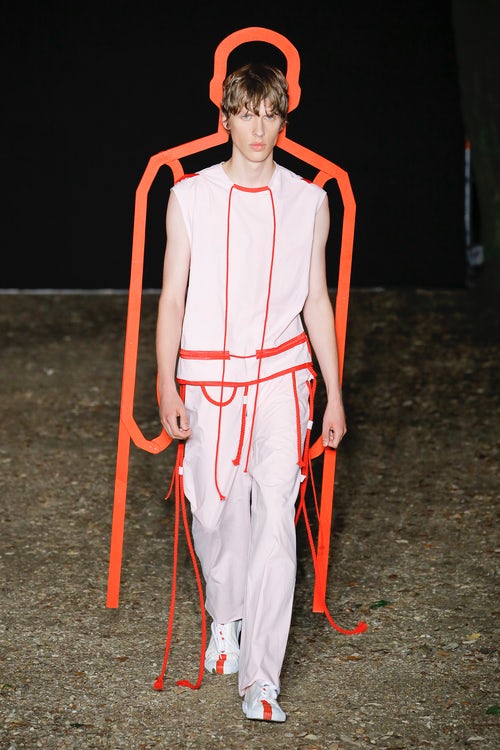 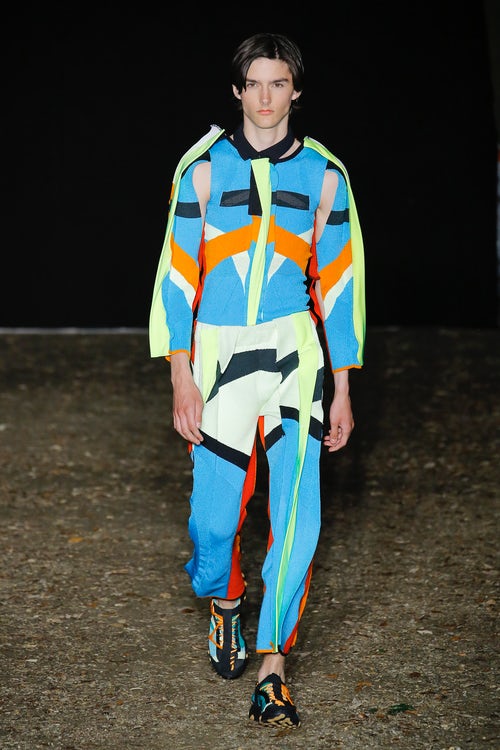 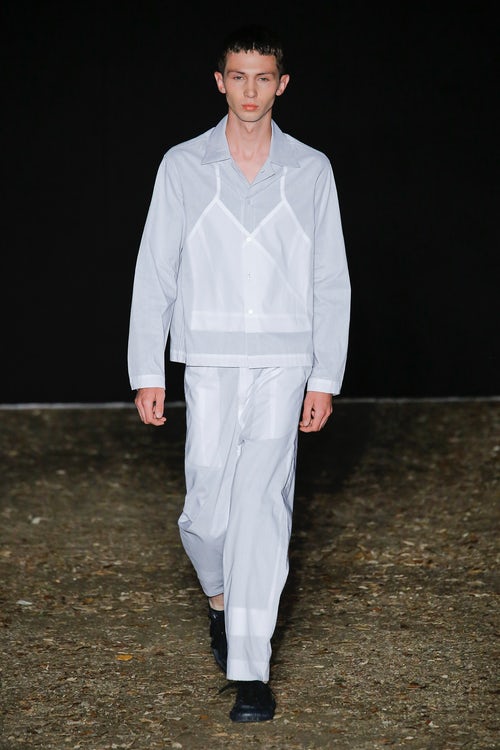 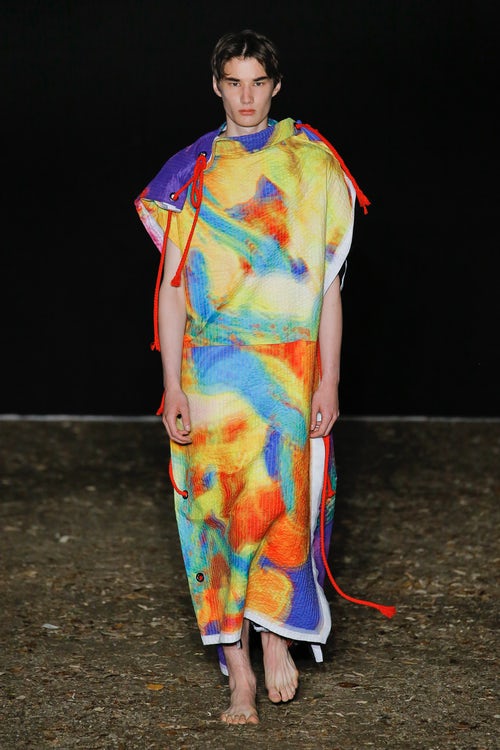 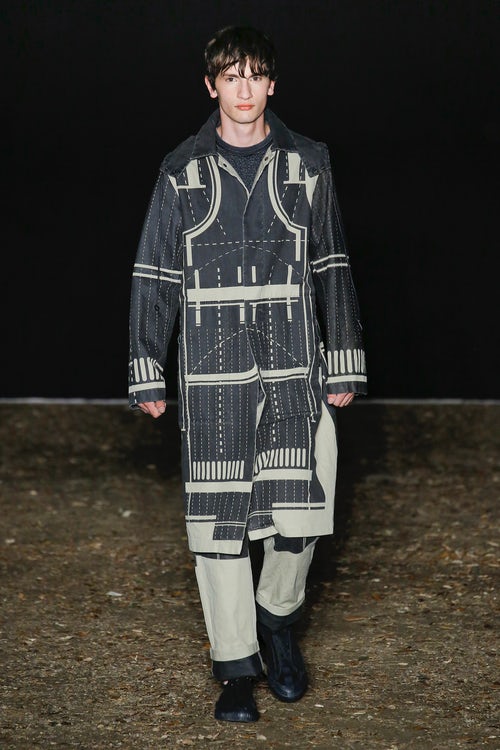 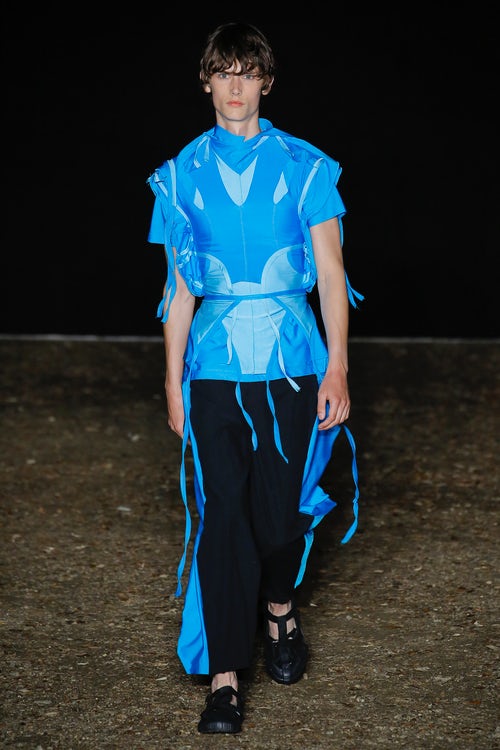 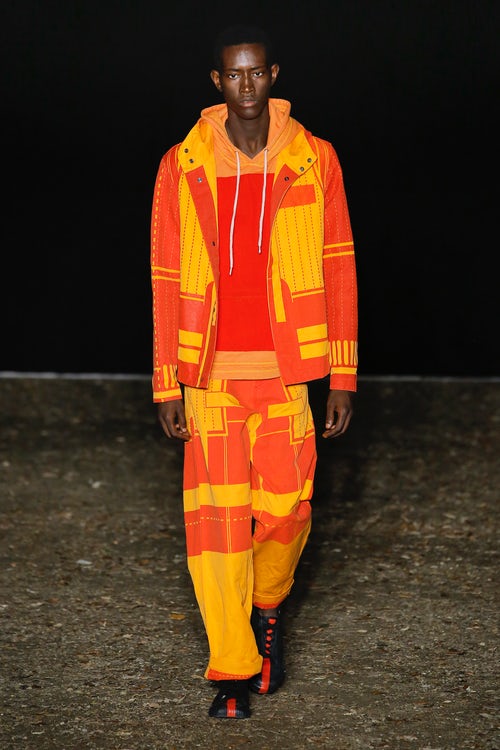 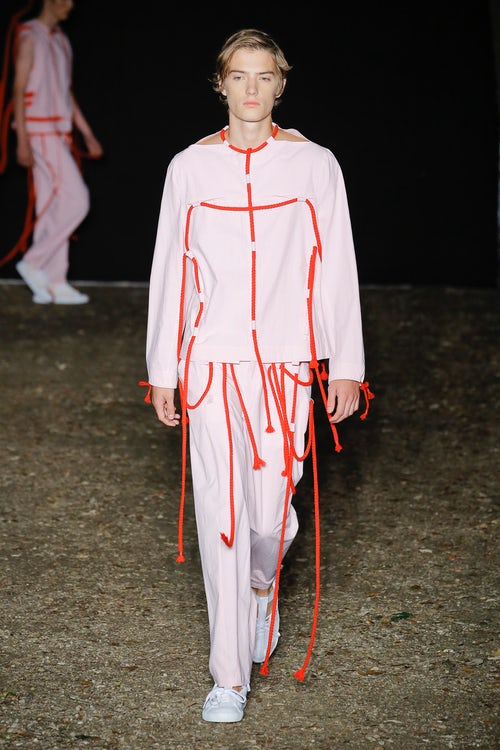 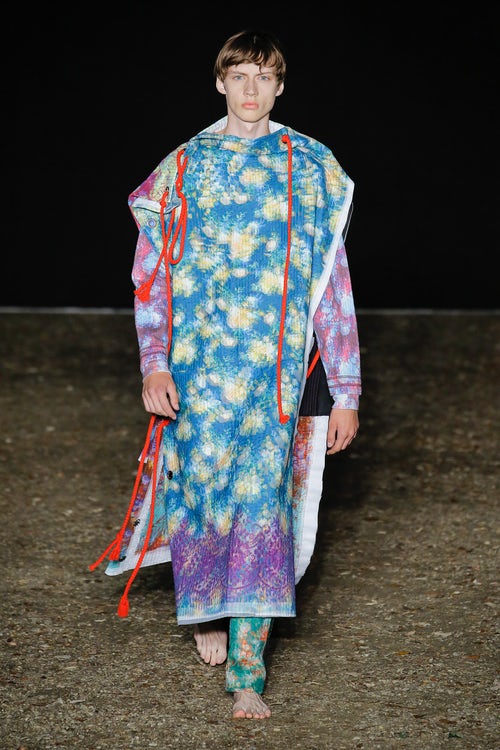 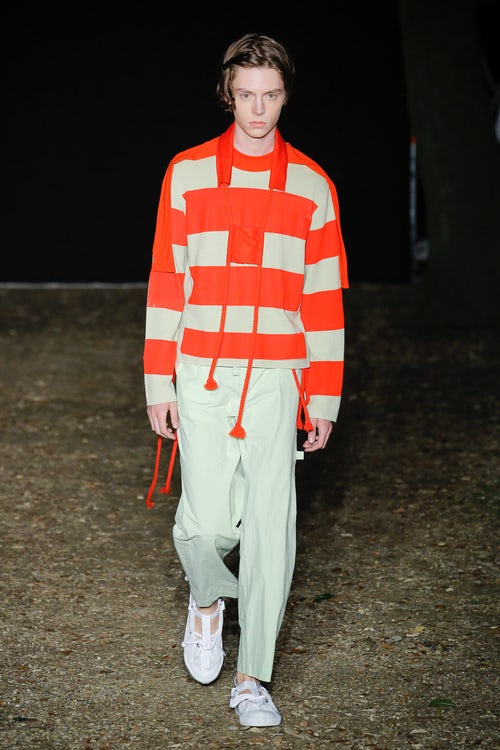 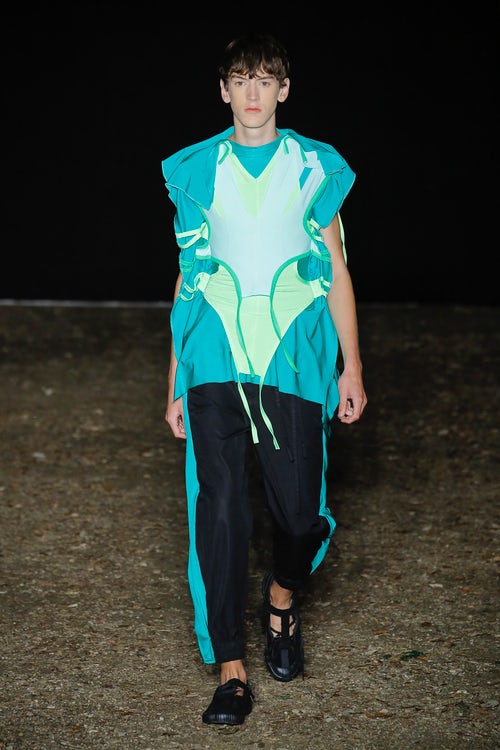 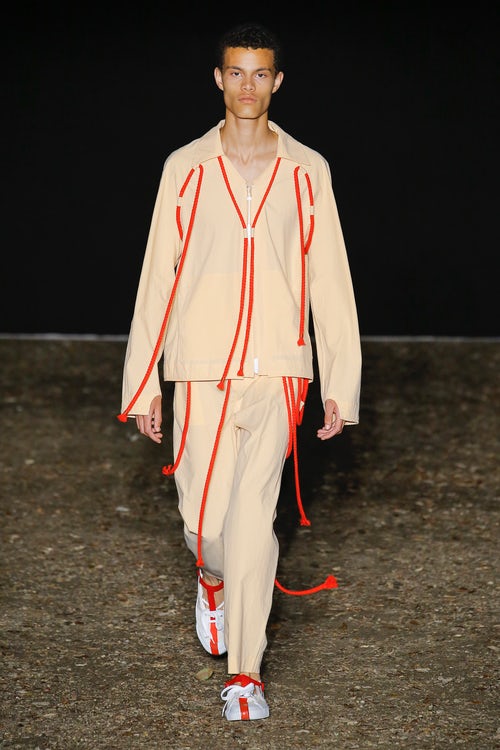 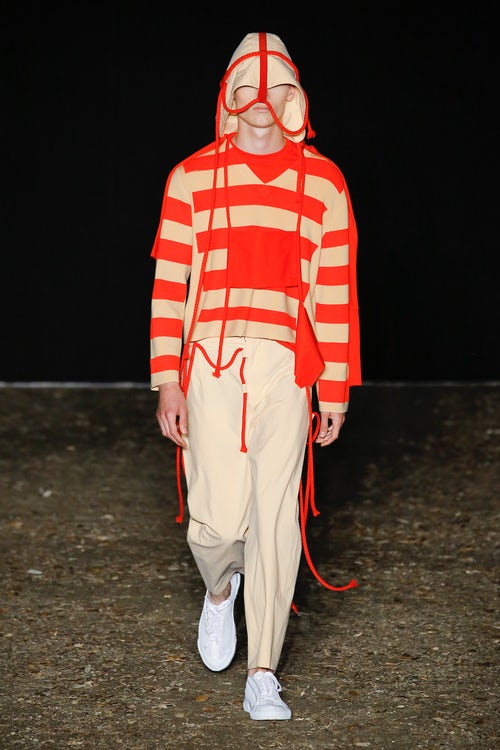 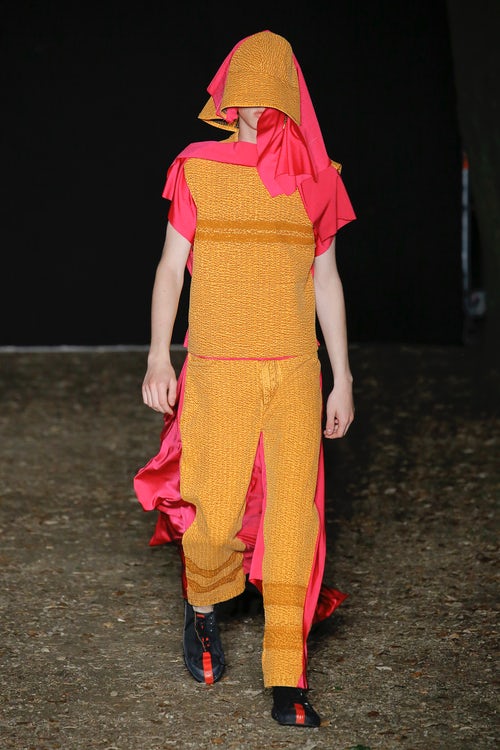 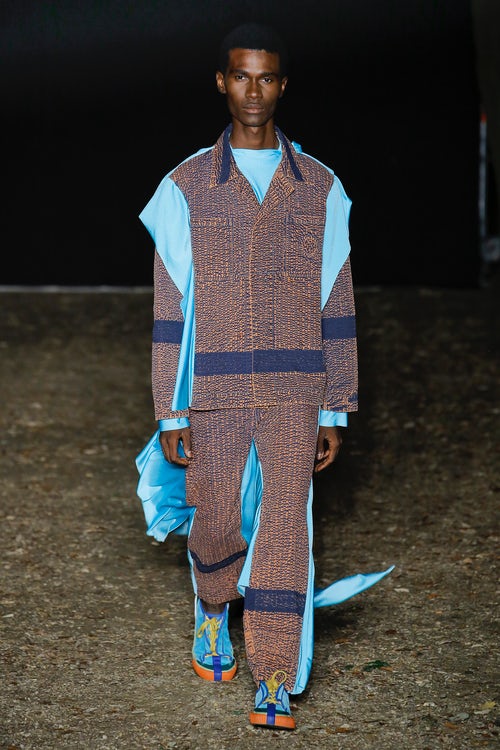 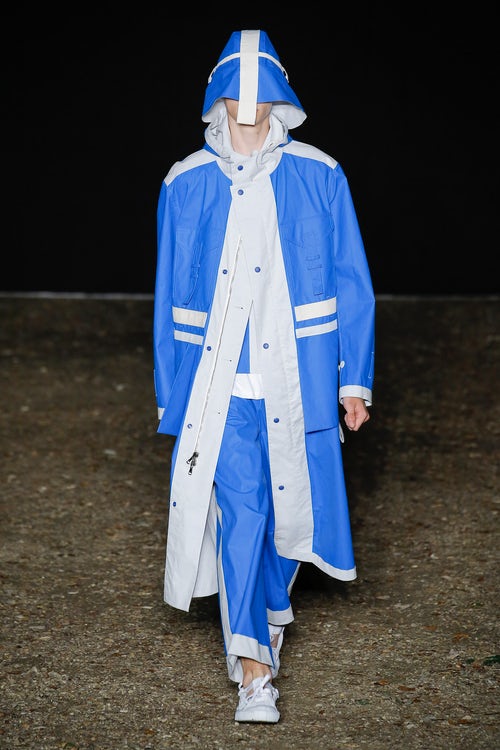