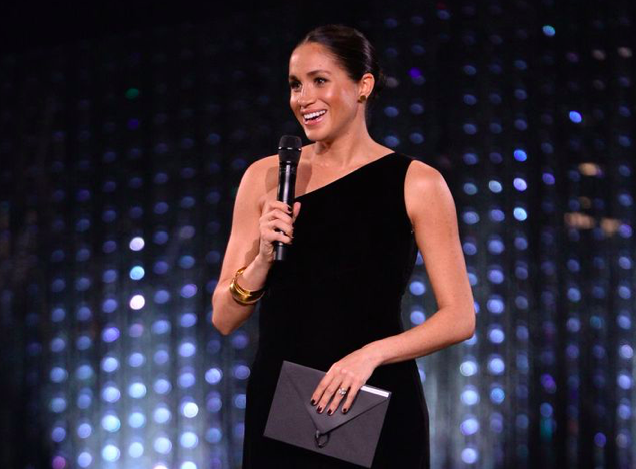 The British Fashion Awards are an evening dedicated to glamor and fashion made in the UK that, in addition to the stars of British fashion, on the night of 10 December 2018 in London also saw another great protagonist: Meghan Markle, the Duchess of Sussex .

Icon and fashion influencer, royal just entered the royal family more in view of the world, Meghan made a surprise appearance on the stage of the Awards between stars, former actors, models and designers and he did it for specific reason: to honor and reward not only his designer of the heart, but also a friend, Clare Waigth Keller.

Radiant in her velvet one-shoulder dress signed by Givenchy and with a good-looking belly, Meghan Markle surprises on stage together with actress Rosamunde Pyke to deliver the “Best Designer of the Year” award to Givenchy‘s Clare Waight Keller, author of the beautiful wedding dress of the Duchess for her Royal Wedding.

A collaboration that later became a friendship, to see the hugs that the two women exchanged on stage.

The evening was definitely in the ropes of Meghan, who tasted a bit ‘of Hollywood vibes: before becoming a royal attended a jet set of actors and socialite given his career as an actress.

Completely at ease on stage and in his element, Meghan in his speech has defined Great Britain “his new home” and then told of the profound value that every woman should give to the clothes she wears and the bond that is created with a designer who creates clothes for her.

The same bond that the Duchess of Sussex, 11 months ago, has made with Clare Waight Keller with whom she has designed the iconic wedding dress now on display at Windsor Castle.

Meghan Markle again on a glamorous stage after more than a year after her official retirement from the scene, then showed other details of her look: gold accessories and an unusual manicure in shades of black, which we had never seen before his entry into the British royal family (who prefers tones that are decidedly more candid for the nails).