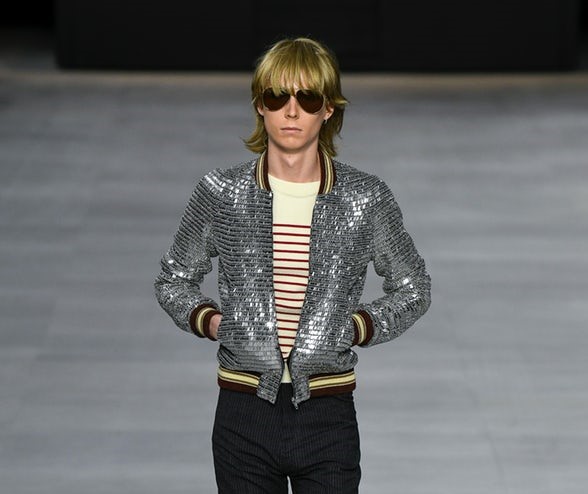 There is something reassuring about repetition. As a creative practice, Hedi Slimane has always made the best out of it

This review will be in reverse. The last image, after all, is the one that counts, they say, leaving a durable impression. The Celine show today closed with a striking image: an army of long-haired, skinny guys, eyes shielded behind aviator glasses, hands shoved in pockets, wearing high-waisted flares, most of them in jeans and either short blousons or blazers. What struck was actually how similar they all looked: an army of clones. 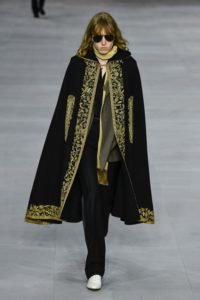 There is something reassuring about repetition. As a creative practice, Hedi Slimane has always made the best out of it. Repetition might tire the viewer soon, but it is also the perfect tool to deliver the message. By hammering and hammering, ideas and styles are etched in the mind of the public, and from there associated forever with a brand. 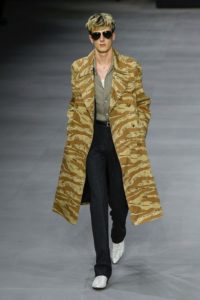 Slimane’s current hammering aims at turning Celine into a purveyor of insouciant French chic with a definite seventies flavour to it. The show today, for instance, was all about the flares, and the long hair cut into bangs on the front. It was about a certain way to be casual, too. Pairing jeans and tailored jackets, for instance, and adding a straw hat or a straw tote to the whole ensemble. It was about a slinky way to be formal, finally, in an open double-breasted blazer.

It made for a charming and upbeat outing: one that came with a whiff of Riviera to it, whilst keeping the requisite Slimane urban spirit. Slimane’s strength is not the ability to move the fashion conversation forward. He does what he does, regardless of trends, and you either like it or not. Yet, he delivers the full package, from the clothing and the image to the music, and it all comes together coherently. Too coherently, probably. The level of control can feel suffocating at times, as taking away life from the whole. Yet, there is also a magnetic charm to it. He masters a dangerous darkness that lures in, making one want to be a clone.

The Summer project: the summer seen through the lenses of Jil Sander