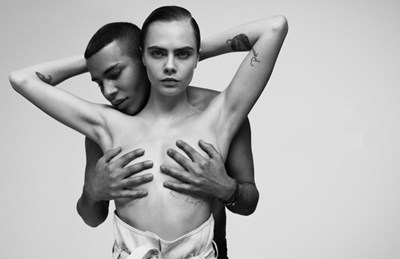 For the spring-summer 2019, the model posed for the second time for the maison led by Olivier Rousteing

Cara Delevingne returns to pose for Balmain. For the spring-summer 2019 campaign, the creative director of the historic Parisian fashion house, Olivier Rousteing, has chosen for the second time the English model, immortalized in two bold black and white images taken by Berliner photographer Dan Beleiu.

In one of the two previewed photographs, which the designer has defined a reference to the covers of the iconic albums of the nineties, the model is posing together with the same Rousteing, while in the other image appears naked in front of a large B, the logo initially created by the founder Pierre Balmain and recently relaunched as part of the brand’s new brand identity.

The partnership with Cara Delevingne, however, provides more projects that will be unveiled throughout the year.

The first collaboration dates back to autumn 2014, when the model had appeared alongside Jourdan Dunn, Issa Lish, Kayla Scott, Binx Walton, Jackson Hale and Ysaunny Brito in the campaign shot by Mario Sorrenti.

Nike closes half of its stores in China