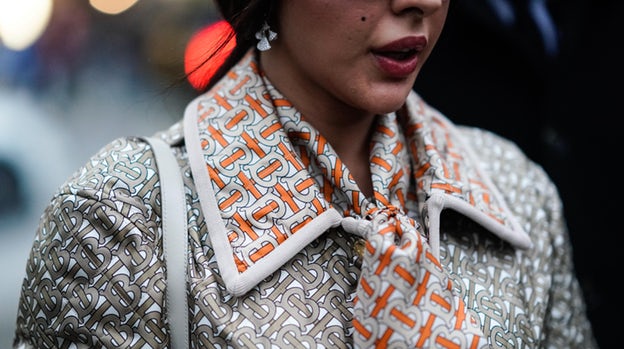 Brand sales declined by a double-digit percentage in Hong Kong

Burberry Group Plc is teaming up with Chinese internet giant Tencent Holdings Ltd. to experiment with blending retail and social media in the key luxury market.

The first step in the Tencent alliance will be a Burberry store in Shenzhen powered by the operator of social network WeChat. The space will offer “unique experiences that connect luxury customers’ social and online lives to their physical environments,” the UK luxury-goods maker said.

The move came as Burberry reported six-month earnings that beat estimates, helped by demand for designer Riccardo Tisci’s new look. The shares rose as much as 9 percent, the most since July.

“Social media and store experiences are important sources of inspiration for luxury consumers, and the customer journey between these touchpoints is becoming increasingly fluid,” Chief Financial Officer Julie Brown said on a call with reporters.

Burberry was one of the first fashion brands to adopt Facebook and sells limited-edition products through posts on Instagram. Last month it announced a deal with The RealReal, a luxury vintage site, to invite sellers of secondhand items into the UK brand’s flagship stores for tea — and to try on something new.

With popular social networks like Instagram banned in China, the deal with Tencent can bolster the brand’s visibility in that market. The move comes as luxury brands are taking a hit to sales from the continuing anti-Beijing protests in Hong Kong. Burberry said sales declined by a double-digit percentage in the territory.

Elsewhere, the company did better, and adjusted operating profit rose to £203 million ($260 million) in the six months through September. Retail sales rose 4 percent on a comparable basis, matching estimates.

Burberry hired Tisci, a veteran of LVMH’s Givenchy, in March 2018. The UK company said his designs delivered double-digit growth in the latest period, with his products now representing about 70  percent of the mainline retail store offer.

Tisci, who took over from longtime creative chief Christopher Bailey, has also given the staid trenchcoat maker more digital buzz with streetwear-inspired “drops” of time-limited collections.

The company said orders from outside retailers will fall less than expected as Tisci’s new looks fuel demand. Burberry has been moving to reduce its wholesale business, cutting its exposure to some mainstream department stores and other outlets, in an effort to give the brand a more exclusive image.