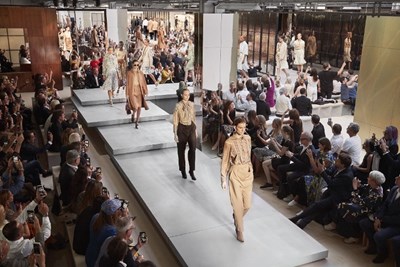 The garments of the first season created for the brand by the new creative director will be on exclusive sale in the New York and Beverly Hills offices of the American luxury store, while for the global launch will have to wait until the end of the month

Riccardo Tisci’s debut collection for Burberry will be on sale at Barneys. The British fashion house has indeed selected the New York luxury store in Madison Avenue and its headquarters in Wilshire boulevard in Beverly Hills for the world premiere launch of Kingdom, its spring-summer 2019 season, which will be available from tomorrow.

The US luxury store will therefore be the first retailer to exclusively distribute the garments of the new creative director’s collection just under a month before the global launch, scheduled for late February.

Strategy that fits perfectly in the plans announced by the managing director Marco Gobbetti, which intends to refine the wholesale channel in the United States, one of the main markets of the house thanks to partners such as Saks FifthAvenue, Neiman Marcus and Nordstrom.

The first floor of the Madison Avenue building will be decorated with installations specially designed for accessories, while menswear will be on the third floor and the women’s ready-to-wear sixth, set in settings inspired by the London stores of the brand. Even the Beverly Hills store will be set up in a similar way and the windows of both locations will be dedicated to the launch.

Also from tomorrow, the Tisci collection will be on sale in the brand’s boutiques on 57th street and 131 Spring street in New York, both renewed for the occasion in order to resemble the London flagship Regent street and the Bond street shop .

Zadig & Voltaire does girl power with ‘Me Too’