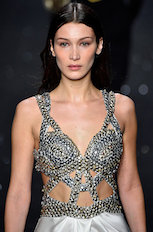 Bella Hadid complained via IG Story that she had returned to her hotel room at midnight in Rome and had to leave the morning after 8:30 am for Milan.

After the party of Bulgari in the capital, where he met Liam Payne, the top model is indeed running on the catwalks of Fashion Week and we must say that it is really worth waking up so early.

Bella’s first first show was for Alberta Ferretti who showed her white women dressed for the day and shiny crystals and metals in the night in the “Futuro Contemporaneo” fashion show. 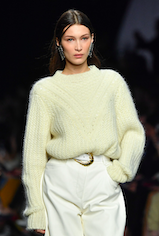 On the catwalk, Bella was shining in a set of embedded gems, which opened in a suave white silk skirt with a large gap.

Loose hair and safe step for the model that enchanted the front row, confirming one of the queens of the catwalks.

From Gucci to Calvin Klein, Where Top Fashion Brands Recruit

Pitti changes dates for 2022, man and child together