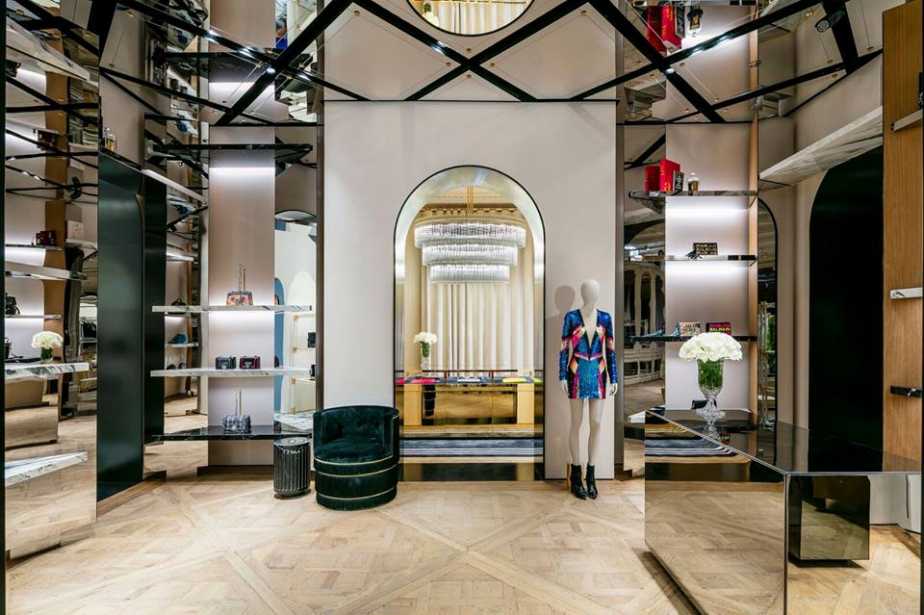 The interior relies on the new store concept for the brand, conceived by Creative Director Olivier Rousteing and designed in partnership with the three young architects from Paris’ Studio AMV: Anna Philippou, Marie-Charlotte Prosperi-Fouchard, and Victoire Guerlay.

This new concept was first introduced in the brand’s Milan flagship, which opened in April of this year,” states the press note shared on the brand’s social media page.

“Like every European, Olivier and I — along with the entire Balmain team — are fascinated by the Las Vegas’ singularly vibrant environment. But our decision to open in Las Vegas was guided less by that storied culture and more by the unique opportunity presented to us by the opening of the Wynn Plaza,” Massimo Piombini, Balmain’s CEO said.

“There is a very strong bond between Olivier and America, which is why we are strengthening both our retail and wholesale channels all across the United States. The chance to be among the compelling mix of brands at this new location made us decide on having Las Vegas to be one of our first American addresses.”

The iconic original Paris flagship was revamped as a classic Parisian apartment for founder Pierre Balmain. London was designed to be M. Balmain’s would-have-been Mayfair pied-a-terre. In the United States, both the Melrose and SoHo spaces were inspired by Villa Balmain, Pierre Balmain’s cliffside mid-century retreat on the Italian island of Elba.

According to the release, for house’s new prototype design, Creative Director Olivier Rousteing directed the architects at Studio AMV to focus on the house’s Parisian roots.

“Since this design will serve as a prototype for all future addresses, Olivier wanted the stress to be placed squarely on the second part of the house’s official name: ‘Balmain Paris,’” Anna Philippou of Studio AMV said.

“He made it clear to us that he wanted Balmain to transport Paris to all corners of the globe, to make each Balmain visitor feel the atmosphere of Paris, wherever they may be in the world.”

Irina Shayk adds a touch of glitter to the Burberry suit

Melissa Satta is the new testimonial of the new Stroili collection