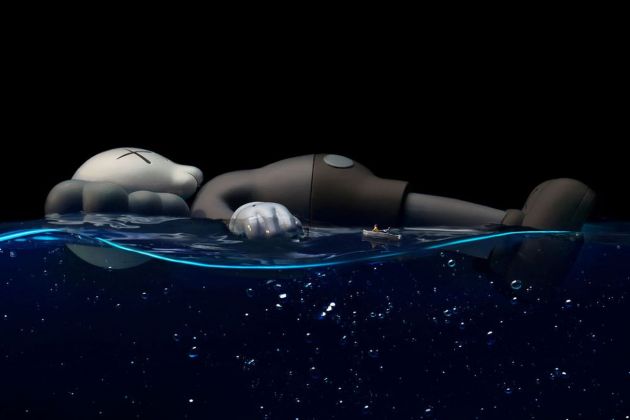 Is he the heir of Jeff Koons? The basic elements are all there: the pop soul, the connections between art and fashion, glamor … Here is the coast Kaws is doing, between a parade of Dior and a stand at Art Basel

Among the most significant shows of the last round of catwalk dedicated to men’s fashion was the debut of Kim Jones (for seven years at the head of the LVMH brand Louis Vuitton), a few months passed to drive Dior Homme (always LVMH).

DO NOT DRESS BUT TOTEM

In this case it is worth taking care not of the dresses that have marched, but of the totem that stood at the center of the circular walkway created inside the Palazzo della Garde républicaine in boulevard Henry IV in Paris.
It is a twelve meter tall floral statue dedicated to the founder of the house, Christian Dior, and to her little dog Bobby (who also shaped the Miss Dior perfume bottle) and to whom the street artist Kaws gave the form of BBF, the his favorite toy.
Is fashion true art? Can toys be an artistic expression? A toy commissioned for a famous maison – the only one to have a real haute couture atelier for man – is it an art object or just a (gigantic) object of merchandising?

KAWS AND BBF: WHO I AM

But let’s go in order. Kaws is the stage name of Brian Donnely (1974), who for this occasion created the umpteenth avatar of his BBF with pink, black, white and green flowers. The designer Kim Jones, in addition to the catwalk set, has also asked him to redesign the “bee” in his comics style, which has always been the symbol of the French fashion house.
But who – or rather – what are the BFF (acronym for Best Friend Forever)?

Kaws designs toys that very often end up in the hands of collectors, given the prices that even reach 9 thousand dollars.
If the context changes, Kaws makes huge sculptures of the same shape but possibly with different materials. In particular, he made BFF the pick of every “artistic” or “commercial” incursion, without interruption. Before Dior he collaborated with A Bathing Ape, Undercover, Medicom Toy, Supreme, Nike, Comme des Garçons, NIGO, Jun Takahashi and Michael “Mic” Neumann. Finished with Dior, Kaws is ready with a collection for the Japanese fast fashion brand Uniqlo.

With the AllRightsReserved agency, for example, it has installed gigantic installations in city squares such as Shanghai, Hong Kong and Bangkok. Other installations in Los Angeles, Qatar and Detroit.

Kaws exhibits at Art Basel with the highly acclaimed Mary Boone Gallery in New York and his next move involves a 28-meter floating BBF floating on Seoul’s Seokchon Lake from July 19th to August 19th. Work title Kaws: Holiday.
The installation, like all the previous ones, will be accompanied by a capsule collection made of pool gadgets: a bath toy (another BFF avatar), a floating bed, t-shirt, an umbrella and towels …

During the press conference to present his new collection, Dior Homme’s designer said: “I feel like a really important artist right now … His work is perhaps more an expression of contemporary culture than art”. Already…

Selfridges on sale for £ 4 billions